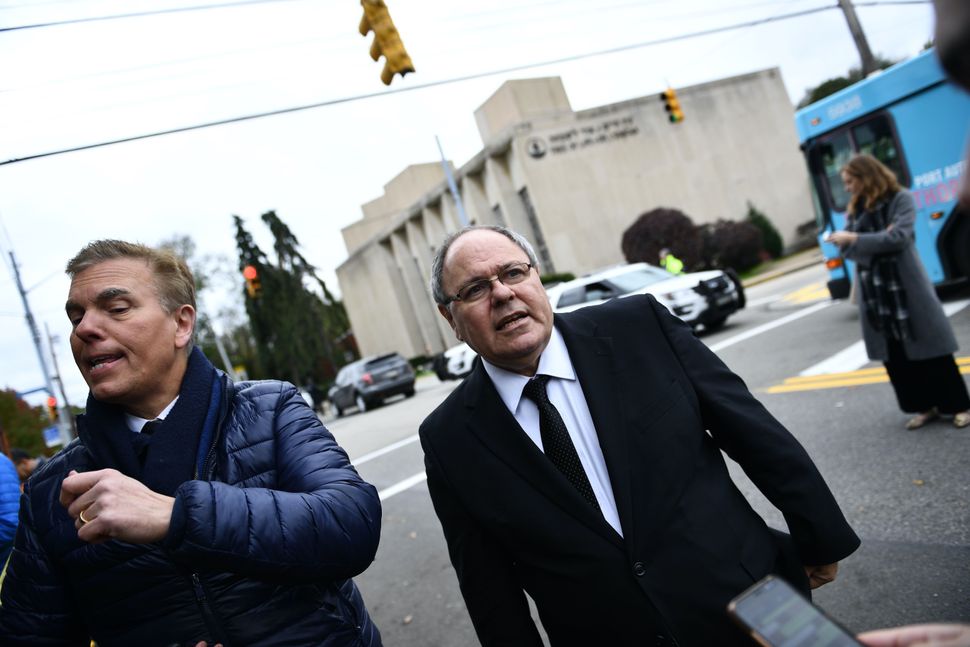 Dani Dayan(C) Consul General of Israel, speaks on October 28, 2018 outside of the Tree of Life synagogue after a shooting there left 11 people dead in the Squirrel Hill neighborhood of Pittsburgh on October 27, 2018. - A man suspected of bursting into a Pittsburgh synagogue during a baby-naming ceremony and gunning down 11 people has been charged with murder, in the deadliest anti-Semitic attack in recent US history. The suspect — identified as a 46-year-old Robert Bowers — reportedly yelled “All Jews must die” as he sprayed bullets into the Tree of Life synagogue during Sabbath services on Saturday before exchanging fire with police, in an attack that also wounded six people. (Photo by Brendan Smialowski / AFP) Image by BRENDAN SMIALOWSKI/AFP via Getty Images

Dani Dayan has been making the virtual rounds the past few weeks as part of an elaborate goodbye tour. After four years of service as Israel’s consul general to New York, it is clear Ambassador Dayan will be dearly missed by the mostly liberal Jewish leadership in the tristate area.

It was not supposed to go this way.

Dayan is not a career diplomat or the type of consensus figure who would ordinarily hold court at the consul general’s office on Second Avenue, a short walk from the United Nations. He is a former chairman of the Yesha Council, the umbrella group that represents Israeli settlements in the occupied West Bank.

Few living Israelis are as associated with the settlement movement as Dayan. He was a strident opponent of the two-state solution and his views on the extent to which Palestinians should have rights in territories Israel controls were always, at best, unacceptably ambiguous.

Not only was Dayan expected to be a terrible fit for New York on its own, but his appointment was widely seen as a political consolation prize for having been refused credentials as Israel’s ambassador to Brazil by the then leftist administration in Brasilia.

Yet Dayan is leaving as a success. Why and how this happened goes a long way towards explaining the predicament of liberal and progressive Jews as Israel, a country in which they have been invested all their lives, descends further into what few on the left are still loath to call an apartheid reality.

Much to my own surprise, I found myself among Dayan’s progressive well-wishers.

I will second this. Shortly after Dayan took up the position, I wrote an op-ed in Haaretz calling him unfit for the position. I was very surprised to soon receive an invitation to meet with him privately. He was respectful and, most admiringly, never pretended to be someone else. https://t.co/tbR69oAPBN

As a 21-year-old recent college graduate at the time of his appointment, I was already an early and vocal thorn in his side. In August 2016, I wrote an op-ed in the English edition of the Israeli newspaper Ha’aretz calling Dayan manifestly unfit for the position and denounced his views as extreme. If liberal Jewish leaders had an ounce of integrity, they would shun him until he was unceremoniously withdrawn.

However, I soon broke my own strident call for a boycott. Shortly after the piece was published, I received an email from the Israeli Consulate inviting me to a private off-the-record meeting with Ambassador Dayan. Although I had some bylines to my name, I was a nonentity on the New York Jewish scene and found the invitation flattering.

I’m still not sure why he wanted to meet with me, but if it was to charm a critic into silence, it worked wonders. Although we argued, I found Ambassador Dayan to be a genial and unassuming presence who was as eager to learn my perspective as he was sharing his.

Most of all, I appreciated that he never tried to bullshit me. He was a diplomat representing his government, but there was no doubt — from the positions he expressed to the words he used to articulate them — that he was still the same Dani Dayan.

I left the encounter thinking he might actually thrive in the position, and that prediction turned out to be correct.

Through his friendly disposition and overtures to non-Orthodox movements that felt alienated by the Israeli government, Dayan was well-liked and respected throughout the community. That the work of his life involved entrenching Israel’s occupation of Palestinian territories was not an obstacle to his seamless ascent in polite society.

In fact, tied together with being such a mensch, that record may have perversely contributed to his allure.

Liberal Jews who have acknowledged Dayan’s civility in recent weeks have come under fire from the most outspoken supporters of Palestinian rights in the community.

I can’t say we don’t deserve it. “Respectability politics,” as it’s derisively referred to on the activist left, has not moved the needle one inch toward a just and secure peace while providing valuable photo opportunities for some of Israel’s most far-right figures. I imagine our Palestinian friends were horrified, if not at all surprised, by the spectacle of Dayan being feted like this.

As much as we would rather not admit it, gestures such as those made toward Dayan by progressive American Jews exact a real price on the ground, albeit a diminishing one in 2020. In his recent book, the political scientist Ian Lustick points to unwavering American support for Israel, the bedrock of which is our community, directly undermines Israeli liberals who have argued that perpetual Israeli rule over the occupied territories will result in serious diplomatic consequences.

American Jews who have just finished gushing over someone like Dani Dayan are not about to allow any serious pressure on Israel to materialize.

Speaking on behalf of only one progressive Jewish actor, there is no easy answer to our Dani Dayan problem. On the one hand, we are Zionists who value relations with Israel and its representatives; on the other, we understand the greatest threat to Israel’s future as a democracy are the ambitions of the settlement movement and its political allies, which threaten to turn Israel into a moral pariah. Our egos are also too easily overwhelmed by sweet talk and inclusion in high-level discussions.

I am obviously not in a position to lecture anyone about this. But if Dani Dayan’s tenure was a test case in how we would handle, say, an Israeli decision to annex portions of the West Bank, then all the predictions of a serious rupture between Israel and progressive Jews in the U.S. are bunk — and Israelis know it. All they’ll need to do is send along another real mensch and we’ll learn to overlook injustice again.