Trump is right: We Jews hate him, despite what he’s done in Israel 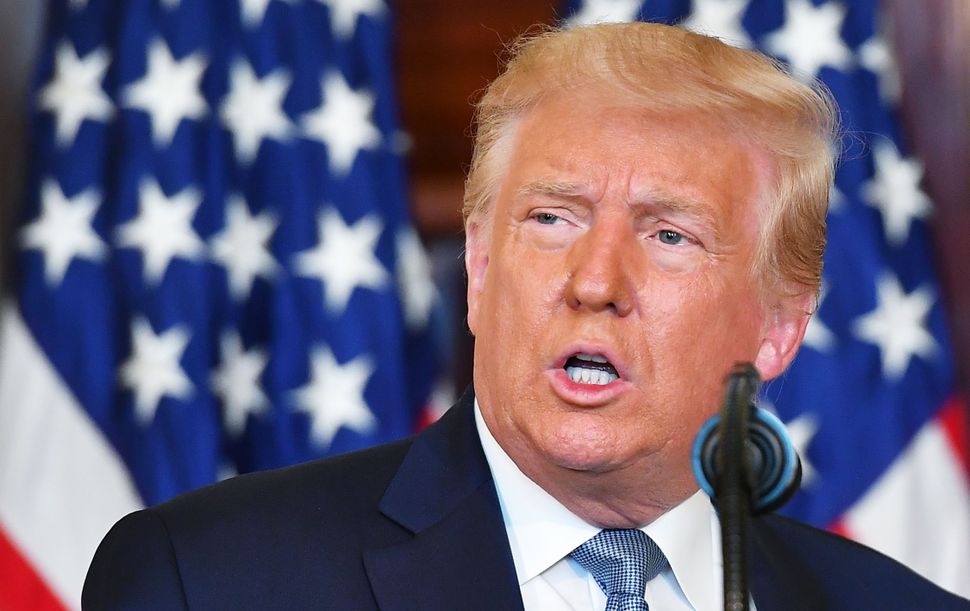 At a campaign rally in Oshkosh, Wisconsin on Monday, the president trumpeted his decision to move the U.S. embassy to Israel from Tel Aviv, where presidents of both parties had kept the embassy for decades prior, to Jerusalem. Jewish Republicans have hailed this decision as part of their pitch to Jewish voters to reelect President Trump. But yesterday, Trump himself admitted that he didn’t move the embassy to appeal to American Jews at all. “We moved the capital to Jerusalem. That’s for the Evangelicals,” he said. And then he went even further. “It’s amazing with that: the Evangelicals are more excited about that than the Jewish people,”he marveled that.

In a moment of candor, Trump admits his pro-Israel policy is driven by aim to satisfy his evengelical base pic.twitter.com/3zjsXLERyu

The thing is, President Trump’s words may have been impolitic, but they weren’t actually wrong. It has long been an open but unspoken secret of American politics that when Republican politicians pursue Israel policies that are straight out of Likud’s wish list, their goal isn’t really to win American Jewish voters, who have been one of the most reliably Democratic voting blocs in American politics for decades, and who show little sign of changing any time soon.

Republican policies toward Israel are in fact a way of mobilizing Evangelical Christian voters, who polls show are actually far more pro-Israel than Jewish voters.

The poll numbers make this clear. Nearly half of Jewish voters report that they think President Trump and the Republican Party favor Israel too much in their dealings with Israelis and Palestinians – a higher percentage than the number of voters in any American Christian denomination who think this. And unsurprisingly, evangelical Protestant voters are the voters most likely to report that they favor President Trump’s approach to Israel and Palestine, while Jews are the second least likely community to favor Trump’s approach to Israel, behind only religiously unaffiliated voters.

And while a majority of American Jews identify themselves as pro-Israel in a very broad sense, very few actually vote based on Israel policies. In fact, a survey by the Jewish Electorate Institute found that American Jews rank an American politician’s stance toward Israel last on their list of policy priorities when deciding who to vote for. The most important issues for American Jewish voters, according to the survey? Healthcare and protecting Medicare and Social Security.

It isn’t surprising that half of American Jews believe U.S. politicians cynically exploit Israel politics as a political tool.

So when Trump baldly declared yesterday that the Israeli embassy move was “for the Evangelicals,” he was actually telling the truth, more honestly and openly than many Republican politicians before him have been willing to do.

But Trump goes further than just admitting the open secret that Republican Israel policies aren’t really about attracting Jewish voters. Rather, he seems genuinely baffled by why this might be so. After pursuing policies that the Netanyahu government has wanted for years, it’s been reported that Trump is genuinely angry and frustrated that this has not translated into actual support for him among American Jews, and he responds to this frustration by lashing out at Jewish voters, slandering the overwhelming majority of us who vote Democratic by saying we show “either a total lack of knowledge or great disloyalty.”

Trump’s anger and confusion at his lack of support among American Jews betrays a deeper truth about his underlying worldview. He genuinely can’t fathom the fact that American Jews, as Americans, care much more about domestic policies than about Israel in our voting priorities.

That’s because, as an ethnonationalist, Trump absolutely equates people and nation-state, believing that a nation derives its identity from its historical ethnic majority, and that the only real Americans are white Christians. That’s how Trump can tell American-born politicians of color that they need to “go back and help fix the totally broken and crime infested places from which they came.” These politicians aren’t white Christians, so in Trump’s ethnonationalist worldview, they can’t come from the United States at all.

This worldview helps to explain why Trump assumes that American Jews will always prioritize Israel in our voting decisions: If you think of America as a white, Christian country that represents white Americans, then it isn’t a far reach to view Israel as the nation-state of the Jews, which speaks for all Jews worldwide, regardless of where we may live.

The examples of President Trump conflating American Jewish identity with Israeli identity are legion. At a White House Hanukkah party, he told American Jews that Israel is “your country.” At another speech, he told American Jews that Netanyahu is “your prime minister.” And just a week after the Pittsburgh synagogue shooting, asked about rising anti-Semitism in the United States, Trump did not even attempt to address American Jews as a community of our own with concerns and fears about our safety in the country where we live, but instead talked about Netanyahu’s praise for him and about moving the US embassy to Jerusalem. This is a far more blatant example of the trope of Jewish dual loyalty than anything a politician like Rep. Ilhan Omar has ever said.

But President Trump inverts the historical trope of Jewish dual loyalty in a significant and quite telling way. Historically, European nationalists used this trope to argue that Jews could not ever be trusted as fully loyal citizens of the nation-states where they dwelled because they would always prioritize the Jewish nation above their adopted nations. Jews were dangerous because we supposedly prioritized Jewishness above other political identities. Trump thinks roughly the opposite: He thinks American Jews are dangerous because we ought to prioritize Israel, the nation-state of the Jewish people, in our voting decisions, and he genuinely does not seem to understand why we don’t.

But the truth is, American Jews have a long tradition of political liberalism – polls show that we are among the most strongly liberal voting groups in American politics – for a very good reason. As an oft-persecuted minority community, we know that we fare best in pluralist societies that protect minority rights and do not scapegoat ethnic and religious minorities. And we know that, even when Christian ethnonationalists focus on other minority groups, their rhetoric almost always ends up being bad for the Jews in the end. That’s why 60% of us believe that President Trump’s rhetoric bears some responsibility for shootings at synagogues in Pittsburgh and Poway.

It’s also why the single political issue that most unites American Jews – 78% of us, to be precise – is nothing related to Israel at all, but disapproval of the Trump administration’s family separations of immigrants at the Mexican border. That’s because we know from our history where detaining people in camps based on ethnic background ends. Try getting four out of five Jews in a room to agree on anything, and you’ll see how rare this community consensus is.

So when President Trump said yesterday that his decision to move the US embassy to Jerusalem was really about Evangelical voting support and not about Jews, he was not just telling an unspoken truth about American politics. He was expressing something deeper about his worldview, and about why he just doesn’t understand American Jewish voting priorities, and never will.

Trump is right: We Jews hate him, despite what he’s done in Israel