The verdict is in: Trump embraces Fascism 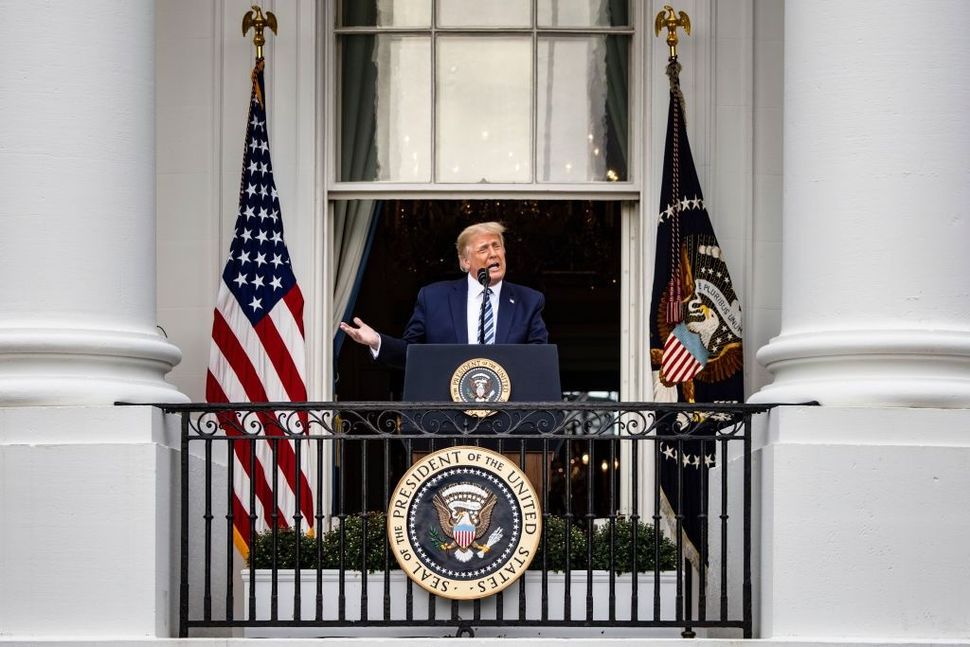 In Germany, they call them “Führer Balconies.” The term refers to buildings with prominent balconies high enough to keep the great leader separate and above the lowly masses, but not so high that the gestures of the leader — a man of the people, after all — would be impossible to see.

That’s all I could think of when President Donald Trump sauntered out onto the balcony of the Blue Room last week in his first live appearance after returning to the White House from his brief hospitalization for COVID-19. He removed his mask and saluted the crowd. Later, he would attribute his recovery to the fact that, like many a Fascist before him, he was a “perfect physical specimen.”

It’s not just the balcony. Trump’s actions over the last four years echo those embraced by Fascist leaders throughout the 20th century, including the führer himself, Adolf Hitler. I’m talking about his restrictions on and excoriation of the free press; his turning police and military officers on peaceful protesters; his attempt to delegitimize a legitimate election; and his courtship of white supremacists and neo-Nazi groups.

At the United States Holocaust Memorial Museum there was a poster in the gift shop warning of 14 early signs of Fascism:

Many journalists, scholars of fascism and the Holocaust, current and former politicians have pointed out that Trump has now exhibited most of these warning signs. This is not a coincidence; it is the result of his determination to follow in the footsteps of authoritarian and Fascist leaders before him.

“If we think of fascism as a wound from the past that had almost healed,” former Secretary of State Madeline Albright wrote in her 2018 book, “Fascism: A Warning,” “putting Trump in the White House was like ripping off the bandage and picking at the scab.”

Masha Gessen, a Russian-American journalist who has written often about the tyranny of President Vladimir Putin, said bluntly in June that “Trump is performing Fascism.”

“Trump is now performing his idea of power as he imagines it,” she wrote in The New Yorker, “In his intuition, power is autocratic; it affirms the superiority of one nation and one race.”

Timothy Snyder, a historian at Yale University, is considered one of the leading scholars on Fascism, and sees Trump as its modern embodiment. “What, then, is the moral meaning of a vote for Donald Trump on Nov. 3?” Snyder asked in an article published this month in Commonweal this month. “To vote for Trump is to traduce the meaning of voting, which is a normal part of the transition to authoritarianism.”

Thus it should not surprise us that Trump called out to his Brown Shirts during his first televised debate with Vice President Joe Biden, signaling to the white-supremacist group Proud Boys that he will call on them when the time is right. No respectable Fascist regime would be complete without its raging, armed, and loyal supporters ready to shed some blood.

And we know what happened in its later stages, too. If Donald Trump wins on Nov. 3, it will be too late to say “Never Again” or point out the warning signs.

Laura Morowitz is a professor of art history at Wagner College in Staten Island, N.Y. In 2016, she won a National Endowment for the Humanities grant for her forthcoming book, “Art, Exhibition and Erasure in Nazi Vienna.”

The verdict is in: Trump embraces Fascism