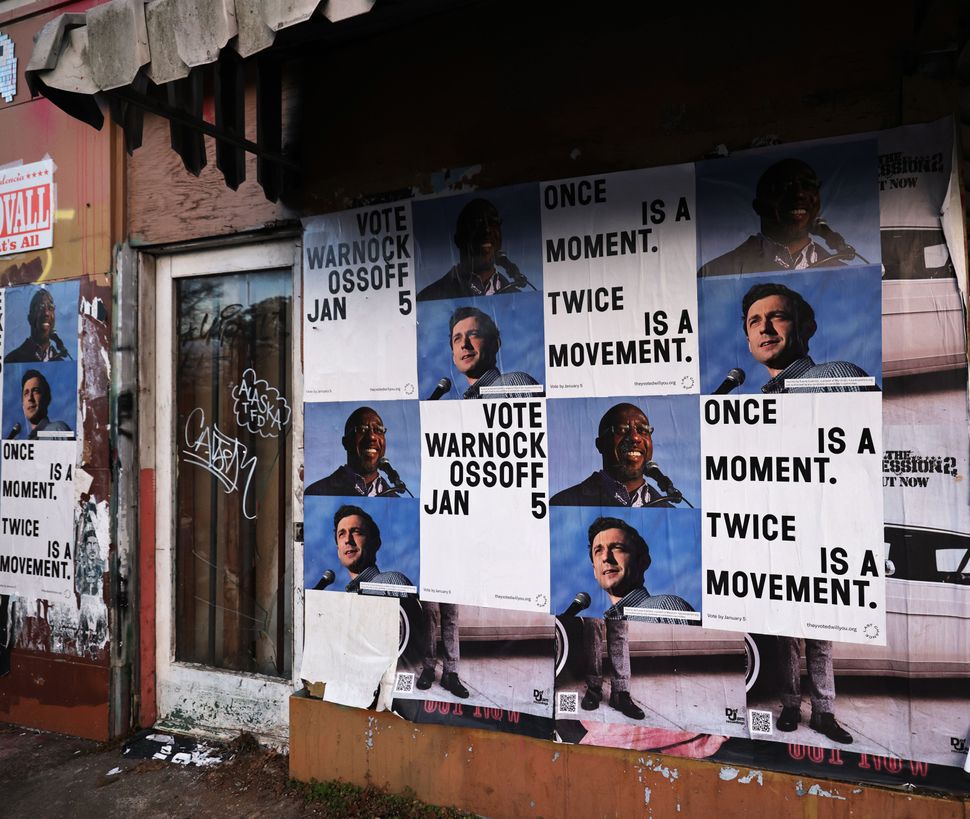 Criticizing Israel has, for a long time, been tantamount to treason to the Jewish far-right.

Georgia Senate candidate Rev. Raphael Warnock took heat in the media this week for his pro-Israel record, which has included criticism of the country’s treatment of Palestinians. So did his fellow Democratic candidate Jon Ossoff, who is Jewish. Both men, and Warnock in particular, have faced repeated attacks on their records on Israel since the November election sent both Georgia Senate races to a Jan. 5 runoff.

But it’s the people who make those attacks who are on the undemocratic side of history.

In the Trump era, the lobbying and partisan politics involved in proving that Israel is a democracy — as, in fact, it is — have, ironically, become a key component of one of the least democratic efforts in modern history. In Georgia and beyond, folks have taken the stance of a recent author in The Forward who urged voters to “rein in the Democratic Party’s illiberal fringe” — and any corresponding criticism of Israel — by voting Republican.

In reality, that advocacy has little to do with Israel. It has to do with the Republican party’s desperate, increasingly dangerous efforts to retain a grip on power, after a presidential election they decisively lost.

Of course, in the circles decrying Warnock and Ossoff’s histories on Israel, that loss is still the subject of raging conspiracy theories. In New Jersey, over a month after Biden was declared winner, The Lakewood Scoop timidly asked the Orthodox Jewish community if Trump should concede. A full two-thirds of respondents want him to keep up the “fight.” This week, as Congress votes to certify the electoral college results, groups of Republican representatives and senators intend to vote against the measure, citing baseless claims of a mishandled election as their impetus.

Some crucial differences: The Jets are not employing Rudy Giuliani to prove that, during TV timeouts, they scored touchdowns that went uncounted. The Jets have not lost nearly 60 lawsuits contesting their losses, nor have they claimed the media prevented their path to the Super Bowl. The Jets are plotting their path forward according to rules and norms: They’ve fired their head coach, and will surely be making other major changes in the months to come.

The losers of the 2020 election have defied such a sensible path, and instead are maniacally attempting to break American democracy.

To urge Jews to cast a vote for Raphael Warnock’s opponent, Sen. Kelly Loeffler, who to this day refuses to acknowledge that President-elect Joe Biden won the election, is to ask them to get on board with that destruction.

And it’s not just about President Trump, whose efforts to overturn the free and fair election results have in recent days become only more extreme. It’s about the specific Republicans on the ballot in Georgia: Loeffler, who has used her considerable platform to consistently deny the results the election, and Sen. David Perdue, who on Monday, rather than denouncing Trump for asking Georgia’s secretary of state to “find” 11,780 nonexistent votes over the weekend, attacked that secretary of state for daring to make the call public, calling it “disgusting.”

That behavior makes the attacks on Israel that Warnock and Ossoff have faced especially repugnant. Israel’s most ardent supporters will point to the value of its democratic institutions, and they are right to do so. Democratic elections are, for example, a powerful differentiator between Israel and its neighboring Arab states. It is beyond hypocrisy that the politicos treating Warnock and Ossoff’s questioning of Israel as beyond the pale are the exact same people actively undermining democratic institutions in the United States.

In fantasy football, sometimes leagues have punishments for last place. A friend of mine had to do stand-up comedy at an open mic of the winner’s choosing — that kind of thing.

Now, pretend the losing team not only refused to concede, but made up allegations of fake point totals and lied about irregularities on ESPN. Pretend they threatened the referees for counting points, and put those referees’ families in danger.

Make no mistake: The Jewish MAGA camp came in last place in November. And for their participation in the erosion of our most fundamental political institutions — under cover of the sanctimonious defense of another country’s democracy — both sitting senators in Georgia deserve to be kicked out of the league.

Matt Matilsky is a New York City-based columnist focused on Israeli and local political commentary. He also has a day job in a Wall Street headhunting firm. Follow him on Twitter @mattmat89