Yes, that ‘Nurses’ episode hurt. So do the Haredi world’s systemic problems. 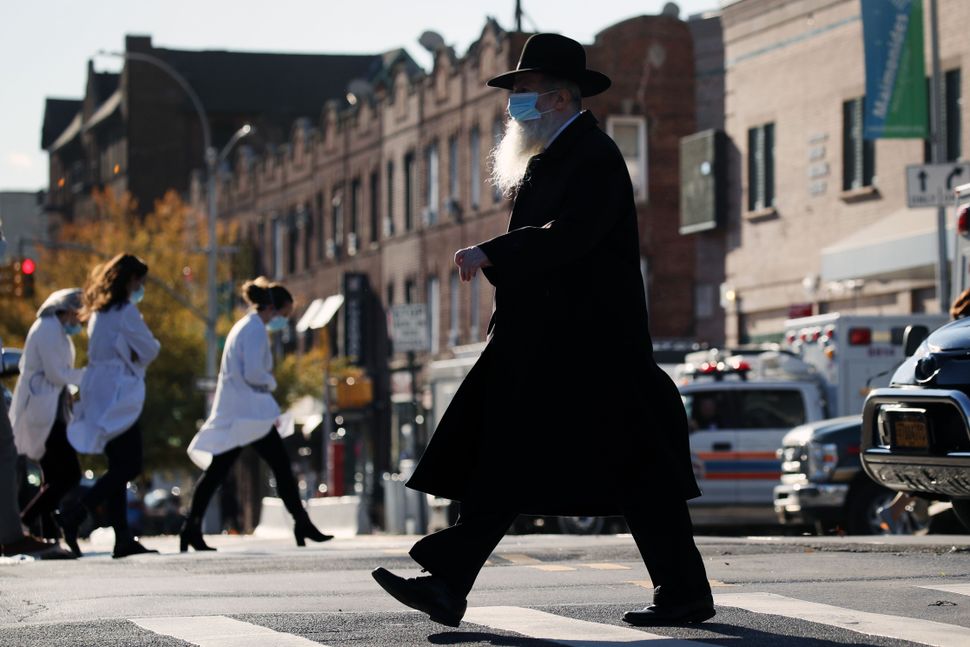 When I was a kid, on Purim, several of my classmates from Belz Yeshiva in Borough Park and I would buy matching costumes, borrow a family member’s boombox and hire a car-service driver to take us from street to street in well-to-do Jewish areas of Brooklyn.

We would hop out of the car, knock on doors, plug in the boombox, dance, then collect some money for tzedakah, or charity. The money then went to our yeshiva, which rewarded us with prizes based on how much money we had brought in.

When I was around 12, our car service ghosted us. (This happened sometimes; services often realized, closer to Purim, that they could raise their prices dramatically since there was such a demand.) I spent the better part of Purim day calling different services to get me and my friends over to Flatbush. Finally, after hours of busy dial tones and waiting on hold, I secured a car service. To my shock, they sent a female driver.

I was enraged: How could they try to get me to violate my religious laws by leaving me alone with a woman we were not related to? I went back into the house, called the car service and said: “Don’t ever send me any woman drivers, or ‘dogs.’”

I have never told this story to anyone. I would have nothing to gain from making it up, because it makes me look awful. And for the record, I regret it deeply.

I recall this story from my youth against the backdrop of an ongoing uproar against NBC for airing an episode of the Canadian show “Nurses” that depicted a Hasidic adolescent refusing a bone graft from a non-Jew. In response, the network has been widely condemned for antisemitism, not just by Hasidic Jews but also by liberal and non-Orthodox Jews eager to show their solidarity.

I can’t help but think my Purim story, had it been portrayed on television, would have elicited the same reaction.

Those who are currently outraged would tell the world my story could not have possibly happened, despite having had few if any real interactions with my community. They would argue the Torah doesn’t allow stealing — the driver left empty-handed — or insulting, and that our religion doesn’t prohibit a 12-year-old boy from being in a vehicle with a woman who is just trying to earn a living.

Yet they would be missing the forest for the trees.

The Torah doesn’t require Haredi men to hold up airplanes because they’re refusing to sit near a woman. The Torah doesn’t permit endangering one’s life and the lives of others, or antagonizing non-Jews with mass indoor, maskless weddings during a pandemic. The Torah doesn’t sanction denying kids an education. Yet all those things happen in the Haredi community, and more often than not appear to be sanctioned by the community’s leadership.

I understand how painful it is to see fellow Jews depicted this way, but in my experience, it is fairly close to the truth.

It is easy to point to external antisemitism as the only culprit for the episode’s perceived missteps, since it absolves us from dealing with the very real deficiencies and systemic problems in ultra-Orthodox communities.

For the good of all Jews — the Orthodox who felt demonized by the “Nurses” episode, which has now been taken down, and the non-Orthodox who jumped to their defense — we must address those issues.

In October, Gothamist reported that after Gov. Andrew Cuomo of New York implemented red zones in neighborhoods with high rates of COVID and non-compliance, including many Haredi ones, yeshivas remained open in defiance, often resorting to the excuse that they were really just “daycares.”

“‘The only people facing consequences for this lockdown are the ones actually following the rules,” a secular parent who asked not to be named told Gothamist’s reporter. “My son, who is in kindergarten, sees kids going to school right next door, and he’s asked us why he can’t go to school, too. Unfortunately we don’t have an answer for him.’”

If that were a plot in a TV show, would we believe it? Would we insist it wasn’t possible because the Torah values life and compliance with the law of the land?

Just last week, a rescue plane to Israel turned out to have carried 11 COVID-positive Haredim because they apparently forged negative COVID-test results. A passenger who overheard the group bragging about falsifying the negative documentation was ignored. Apparently that was an unbelievable plot too.

Here’s another plot to imagine: One of the poorest communities in the entire country regularly comes together to raise hundreds of thousands of dollars to strip parents who choose to leave the community of custody of their children.

Or this: dozens of Yeshiva graduates file a complaint against New York City for failing to enforce the education law that would have guaranteed them and their children a “substantially equivalent” education. (Disclaimer: as executive director of Yaffed, I oversaw the filing of that complaint.) The city drags out the inquiry for more than four years, during which time the mayor collaborates with yeshiva leaders to stall the investigation in return for their assistance in getting their representative in Albany to aid his efforts to extend his control of the Department of Education.

Meanwhile, a Haredi state senator who is elected as a Democrat but caucuses with Republicans — throwing the State Senate to the Republicans in exchange for power — holds up the state’s $168 billion budget until the legislature approves an amendment that would exempt yeshivas from having to meet the same standards legally required of all other private and public schools. The investigation finds that 26 out of 28 yeshivas investigated do not meet minimum educational standards. A year and a half later, those yeshivas are still not improving and continue to reap millions of taxpayer dollars.

Does that plot seem believable? Does it bother you less because it’s “only” educational neglect, not the racism and misogyny portrayed in the NBC show?

In fact, some of the same critics of the NBC episode have also sought to silence the media’s reporting on systemic educational shortcomings in the Haredi community, trying to silence the voices of those who have experienced that neglect.

At every twist, those unfamiliar with facts on the ground grow infuriated. “What are you talking about?” they ask. “Speak to an Orthodox person who lives in Riverdale to get your facts straight. This is such an unbelievable and inaccurate misrepresentation of the Haredi world!”

Yet as I have experienced it, it is exactly what the Haredi world of today looks like.

So my message to the broader Jewish community is: if you are uncomfortable with the way we are depicted on TV, step in to fix these serious issues in our community. Otherwise, if you cry antisemitism when the media depicts us in ways that make you cringe, it shows us that you are far more interested in improving perception than reality.

Naftuli Moster is the executive director of YAFFED, a non-profit that advocates for increasing secular education taught in ultra-Orthodox schools.

Yes, that ‘Nurses’ episode hurt. So do the Haredi world’s systemic problems.