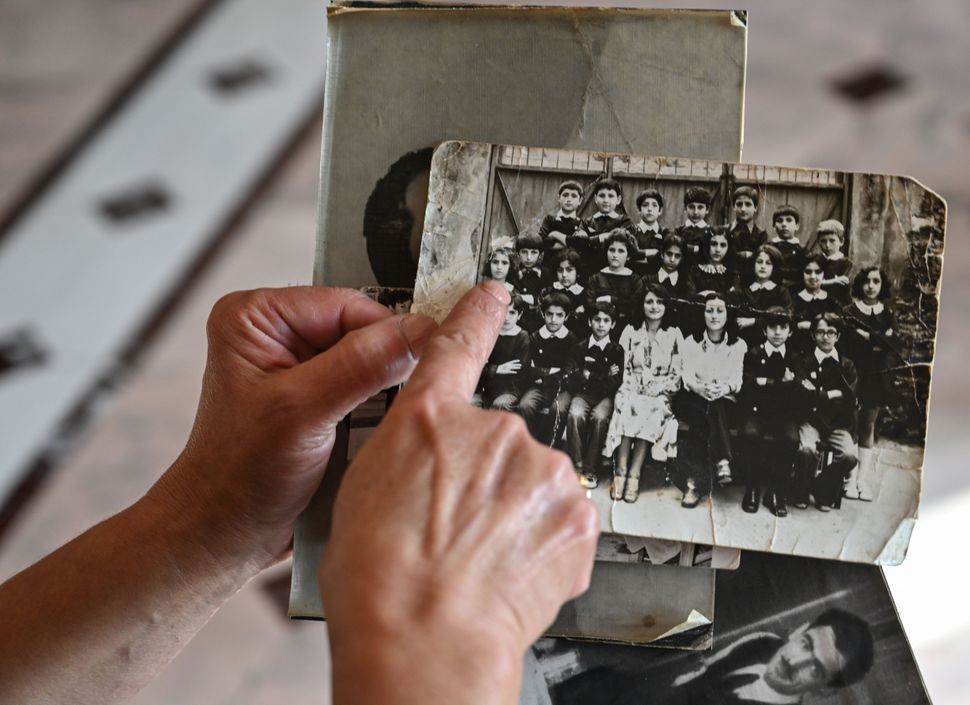 Turkish Armenian Silva Ozyerli shows a picture of her family album during an interview on October 19, 2020 in Istanbul. By Ozan Kose/Getty Images

There’s a report that Adolf Hitler once asked, “Who, after all speaks of the annihilation of the Armenians?”

The veracity of that quote is unclear. But its popularity speaks to the uncertain place of the Armenian Genocide in the history of the 20th century’s ethnic cleansing movements — often sidelined, or conveniently forgotten about.

History for Armenians worldwide is, sadly defined by persecution and oppression — an experience that the Jewish people knows all too well. It includes one of the first genocides of the 20th century, when an estimated 1.5 million Armenians were systematically exterminated by Ottoman Turks, an event commemorated annually on April 24, and which Turkey still denies to this day.

As a country that was founded in the wake of genocide, it should be inconceivable that Israel would choose to stand on the wrong side of history when it comes to the Armenian Genocide. The explanation of why it does has to do with politics.

Turkey was the first Muslim-majority country to recognize the Jewish state and has long been one of the only ones with which it could do business. The relationship was aided by the fact that Turkey was perceived as being a moderate Islamic country. Recognizing the genocide would have only complicated things.

However, under the rising authoritarianism of Turkey’s President Recep Tayyip Erdoğan, whose regime has imprisoned more journalists than any other country in the world and continues to crack down on minority groups, Israel’s ties with Turkey have become less sturdy.

Yet even as Israel carefully distances itself from Turkey, its refusal to recognize the Armenian Genocide gives Erdoğan, and other despots like him, cover in their ongoing efforts to suppress human rights.

That’s in addition to the actual assistance Israel gives Turkey and its allies in continuing to advance the awful legacy of the Armenian genocide. When Turkey last year supported Azerbaijan’s attack on ethnic Armenians living in the disputed territory of Nagorno-Karabakh, Azerbaijan used Israeli “kamikaze drones” to indiscriminately bomb churches and destroy cultural centers, a blatant violation of international law.

As victims of oppression, Armenians saw and continue to see the aggression in Nagorno-Karabakh as a continuation of the 1915 Armenian Genocide and an existential threat to their very existence. While a ceasefire agreement was brokered to stave off further damage, there continue to be reports of Armenian heritage and architectural sites — including churches and monasteries that have stood for hundreds of years — being defaced, vandalized and destroyed altogether as part of Azerbaijan’s campaign of ethnic cleansing in the region. Images have recently surfaced showing that a memorial dedicated to the victims of the Armenian Genocide in Shushi has been razed by occupying Azeri forces.

It’s true that within Israel, there was much debate on how the country ought to navigate the Nagorno-Karabakh conflict. And the country had compelling reasons to refuse to change its stance toward Turkey and Azerbaijan, despite the egregious wrongs committed during the conflict. For years, Israel has seen Azerbaijan as a key ally when it comes to geopolitics, particularly because of its proximity to Iran for intelligence-gathering and military operations. Oil imports from the country account for approximately 40% of Israel’s fossil fuel consumption.

But all these considerations are proof that recognition of the Armenian Genocide has become a political football in Israel, a country that should be particularly aware of the consequences of genocide denial.

In 2018, Israeli lawmakers voted to debate recognizing the Armenian Genocide as relations between Israel and Turkey deteriorated. Even Israeli Prime Minister Benjamin Netanyahu’s son Yair turned to social media to accuse Turkey of being guilty of genocide. But the debate went nowhere.

It’s past time for Israel to take a firm stance and stop treating recognition of the Armenian Genocide as a political matter, instead acknowledging it as an irrefutable fact of history. Political expediency should play no role in this debate. Armenians and Jews share a common history that has been marked by persecution and mass suffering. Being neutral or staying silent only helps the deniers.

Stephan Pechdimaldji is a public relations professional who lives in the San Francisco Bay Area. He’s a first-generation Armenian American and grandson to survivors of the Armenian Genocide.