We generally show up late for our weekly food-pantry shift, my daughter and I, pulling our masks on as we duck into the church basement just ahead of the 6 p.m. open for guests. I start by telling you this because I don’t want you to think we are so virtuous for doing this volunteer work; I’m surprised I have kept it going for more than a year now, and I’m certain it’s because I get more out of it than I give.

I give: two hours each Thursday handing people canned staples and trying to make piles of carrots or cauliflower look enticing. I get: a regular date with my kid; a weekly excuse to order takeout (support local business!); a reminder of how good we have it; and free produce when there’s extra that’s likely to go bad.

Plus, perhaps most importantly, an unlikely new friendship — not just for me but for my 13-year-old — with a 65-year-old retired school principal and English teacher named Mike Post who embodies the word “hineni” though he’s probably never heard it before.

Hineni is Hebrew for “here I am.” It’s what characters in the Torah respond when God calls. (It’s also what we used to say when they took attendance in Hebrew school.) It’s about the importance of showing up. Loyal readers may recall that I wrote about this a year ago, in a eulogy for my friend Freddie Pressman, who was the hineni icon at our synagogue — and the man who seeded its partnership with the Park United Methodist Church, which is how we ended up working at this food pantry in the first place.

Mike reminds me a lot of Freddie: humble, straightforward, committed, funny. When I asked him the other night how he ended up running the food pantry, which is called the Manna Food Depot, he basically shrugged. 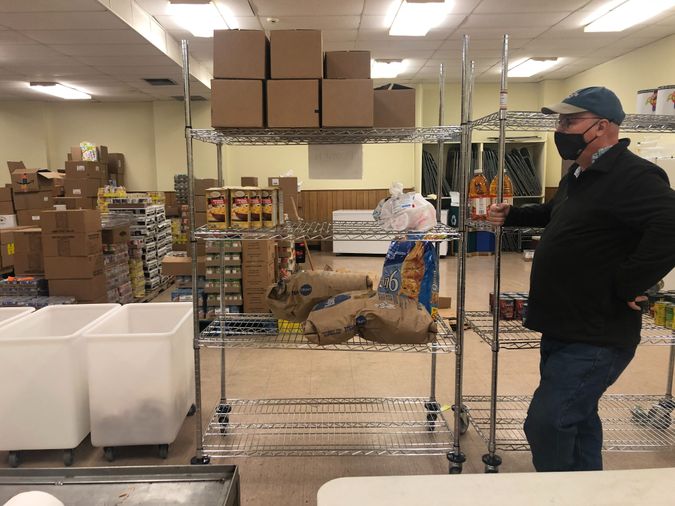 The storeroom. Courtesy of Jodi Rudoren

“Joel called me last April or May and said could you just help me with this run down to the food bank, we just need to load the trailer and someone else will unload it,” he recalled, referring to Pastor Joel Hubbard, who created Manna as the pandemic set in. “He said we’re going to do another run, and I offered to do that. Then he said they needed somebody to order the food, and that was something that was easy for me to do, so I offered to do that.”

By the end of the summer, when we decided to move Manna from a makeshift parking-lot pop-up to a long-term basement operation, he said, “I kind of took it over.”

What that means is that Mike goes online each week to order enough from the Community Food Bank of New Jersey to feed about 100 families. On Wednesday mornings, he drives the trailer with a friend up to the food bank and back to the church. On Wednesday nights, some volunteers help him unload it and pack 45 bags that are delivered to people’s homes. On Thursdays, he’s there before the 6 p.m. open to set out the goods, and after the 8 p.m. close, putting extras away.

This week, he was there on Friday, too, because the home-delivery volunteer couldn’t make it on Thursday. “When you’re dependent on volunteers, you kinda do things when you can get them,” he said. “It occupies my mind a lot of the time,” he acknowledged, then added: “All of the time.”

For me and my daughter, it occupies just a couple hours every Thursday. She’s in charge of recording how many people come in and how many are in their families. I help fill their bags with their choices from our often-odd smorgasbord. She also has done a neat series of drawings of pantry items, which we’re going to make into posters and frame to spruce up the basement walls.

In March, we had a good laugh with the customers because we had reams of cabbage and packages of frozen corn dogs — perfect for St. Patrick’s Day! For a few weeks in January there were enormous bags of pretzels, suitable for the Super Bowl parties no one was having because of the pandemic.

It’s interesting to see what’s popular — breakfast cereal and, especially, oatmeal; canned tuna or sardines (!); apple juice and shelf-stable milk, beans of all kinds — and what’s not: it’s been very hard to convince folks that purple potatoes taste just like white ones.

The crowd is mostly working-poor, not desperate: we are saving folks money they would scrape to spend at the grocery store, not providing their only meal. Most are either Russian or Latinx immigrants, and wearing masks doesn’t make the language barrier any easier. But most come weekly, so we’ve all gotten to know each other — when a certain woman arrives, I no longer wait for her to whisper, “Always,” I just go in the back and grab some maxipads from the stash.

Our little food pantry is one of probably hundreds that have sprung up or been much, much busier during this past year of pandemic. Some 18 million adults, or 9% of all adults in the country, reported that their households did not have enough to eat one week last month, according to the U.S. Census Bureau’s Household Pulse Survey. That’s nearly triple the 3.4% who said the same thing at any point in 2019.

On Thursday night we arrived (late, of course) to find that Mike had stocked the protein shelf with a new item: “Beef with Juices,” a 24-ounce white can with a black cow on the front.  The back says it is”fully cooked and ready to use,” and suggests “salads, sandwiches, soups, stews, barbecue, spaghetti sauce, meat pies, casseroles, tacos or over egg noodles.”

The first few folks shook their heads at the beef. But others, mostly the Russians, grabbed for it. One older Russian gentleman said it reminded him of the army, and that it would last in the can for 30 years; a young man who was born in Belarus but came here as a baby also wanted three cans. 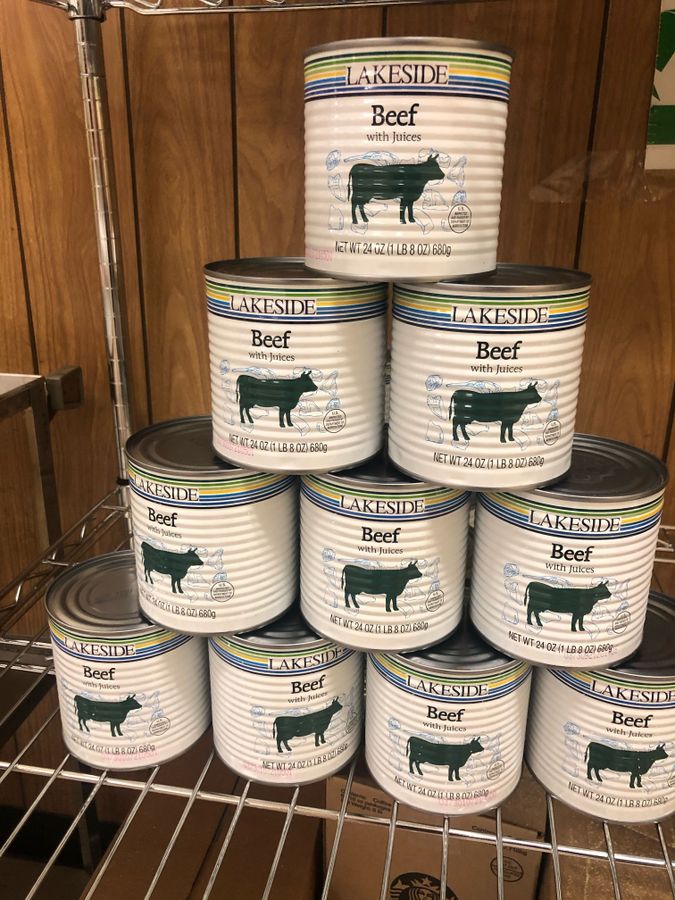 Our last customer most Thursdays is a woman in her 30s or 40s with a sleek buzzcut, fashionable earrings and only a slight Russian accent. A few weeks ago she was telling me about how she had not regained her sense of smell or taste even months after recovering from Covid, and I sent her this amazing episode of The Daily podcast about how some people have addressed that.

Last night she came in just before the 8 p.m. close, excited: Her sister had told her about the canned Beef with Juices. My fellow volunteer happily gave her two cans. Could I have three? she asked. Sure.

When I asked Pastor Hubbard last spring about his creation of our Manna Food Depo his answer was, unsurprisingly, deeply spiritual.

Mike is a different story.

“I’m an agnostic,” he told me. Between confirmation in ninth grade and his 60th birthday, Mike said, “I was in a church probably a dozen times.” But his wife is a spiritual person, and when they were living in the Bronx, they got involved in St. Paul’s Lutheran Evangelical Church in the Parkchester neighborhood. Mike helped run the food pantry there, too, before they moved to Bloomfield, N.J., in 2019, and connected with Park United.

“For me, it’s not religious,” he said. “I really don’t give a whole lot of thought to a Supreme Being. Maybe I should but I don’t. What the church has done for me is it’s provided me with good work to do.”