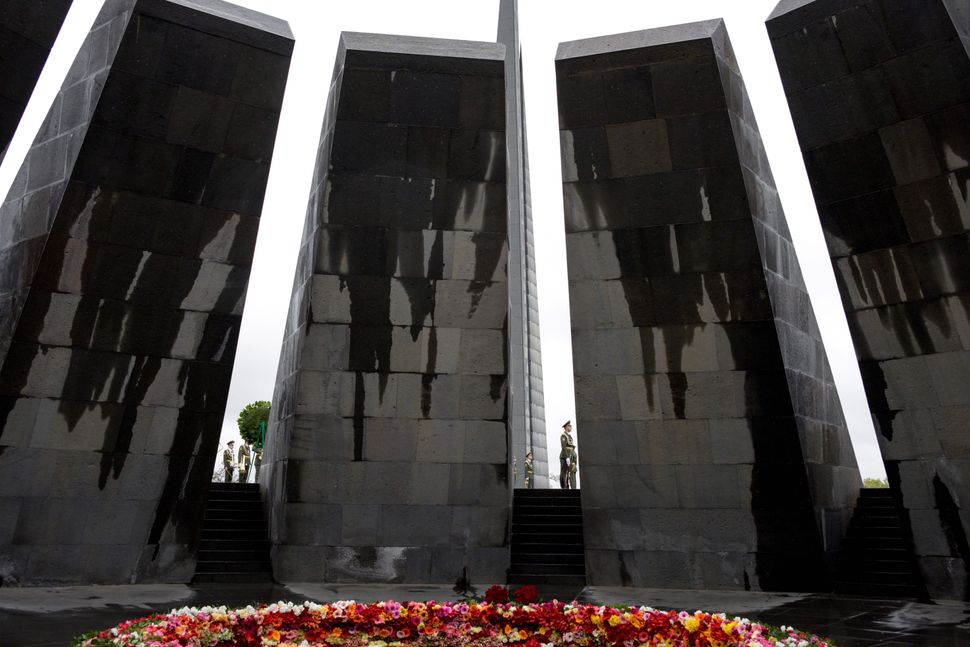 Armenian honor guards attend a ceremony commemorating the 105th anniversary of the massacre of 1.5 million of Armenians by Ottoman forces in 1915, at the Tsitsernakaberd memorial in Yerevan on April 24, 2020. By KAREN MINASYAN/Getty Images

When your vocation is dealing with prejudice, hatred and antisemitism you don’t win many battles.

Yet this past week, there were two moments that allowed for momentary rejoicing.

Interestingly, both dealt with words and reminded us of the enduring power of speech. First, Joe Biden became the first American president to recognize the Armenian Genocide. And second, the Associated Press, whose Stylebook is the leading reference for newspapers, corporations and English teachers at every level, announced it would no longer hyphenate the word “antisemitism” or spell it with an upper-case letter.

“Who today speaks of the Armenians?” Some historians contend that Adolf Hitler asked this question in 1939 when he suggested that a forthcoming war would result in the destruction of European Jewry, although the evidence that he actually said those words is murky.

But the truth of the anecdote is beside the point. Hitler was certainly well aware of the fact that, although only two decades had passed since the horror of the 1915 Armenian Genocide, virtually no one outside the Armenian community spoke of it. Hitler may have legitimately assumed the same would happen with the genocide of Europe’s Jews.

In time, the Armenian genocide became a “model” for yet another aspect of Holocaust history: denial.

The Turkish government, in the face of much evidence, has adamantly denied that its campaign against the Armenians was a genocide. It adopted that stance in the earliest years after the event, and maintains it today. I have Armenian friends and colleagues whose parents and grandparents were survivors of this tragedy. The persistent insistence of the Turkish government that it was just a “civil disturbance” has driven them and their families to distraction.

It was not until I began to study and battle Holocaust denial that I fully understood how terribly painful this was.

At the opening of the Holocaust Museum in Washington in 1993, a Holocaust survivor approached me to insist that I keep up the fight. I pointed to the magnificent structure behind us and asked: “There is a Holocaust museum in Washington, D.C. adjacent to the National Mall. The deniers are nothing compared to this.” She shook her head and said: “They are relentless.”

She was right. I was wrong.

Therefore, President Biden’s recognition of the fact of the Armenian Genocide brings not just some balm to the descendants of this horror, but also renders long overdue historical justice.

It cannot bring back the dead. However, it can properly recognize what happened to them.

The other victory might be dismissed by some people as nothing more than a stylistic change.

Historians have been complaining about the use of “anti-Semitism” instead of “antisemitism” for years. The hyphen, they argued, suggested that the word meant hatred of something called “Semitism,” when in fact, the word “Semitic” was coined in 1781 by a German historian to describe a group of languages that originated in the Middle East and that have some linguistic similarities.

Wilhelm Marr, a German journalist of the late 19th century, popularized use of the term “Semitic” and its offshoots in reference to Jews. He contended that Jews who had converted to Christianity were incapable of assimilating. These converts, he argued, remained foreign and intended, through their other-ness, to destroy pure Christian civilization. He rejected the term “Judenhass,” which translates roughly to “Jew-hatred,” because it suggested only Jews who were still Jews should be hated. Seeking a word that had a racial and “scientific” connotation, rather than just a religious one, he chose “Antisemitismus.”

For him and the legions of people who adopted the term, it meant one thing and one thing only: hating members of the Jewish “race.”

For some reason, when the word first appeared in English in 1893 it was given a hyphen and became anti-Semitism. This has allowed legions of people to insist that they cannot be antisemites, because they too are “Semites.” (This argument, of course, ignores the fact that one can be “of” a group and, nonetheless, hate the group.)

As to the value of the AP deciding to make the term “antisemitism” all lower-case: something as illogical, delusional and full of absurd self-contradictions as antisemitism doesn’t deserve the dignity of capitalization.

It should not escape our notice that both these events have to do with words. Some may be tempted to dismiss them as stylistic developments signifying little at all. I would remind those who are so inclined that every genocide begins with words. Not all hateful words need necessarily lead to a genocide. But no modern genocide — Armenian, Holocaust, Rwanda and so many other — began with killings. First, there came the words.

This week one word — genocide — was properly applied to a terrible tragedy. Another word was altered to reflect its true meaning. Small and long overdue victories? Maybe. But, if words count, these are victories nonetheless.

So, I, together with so many others, momentarily rejoiced.

Deborah E. Lipstadt is Professor of Holocaust history at Emory Universoty and the author of “The Eichmann Trial” (2011) and, most recently, “Antisemitism Here and Now” (2019).