Grieving the Mount Meron disaster, I connected deeply with Haredi moms for the first time 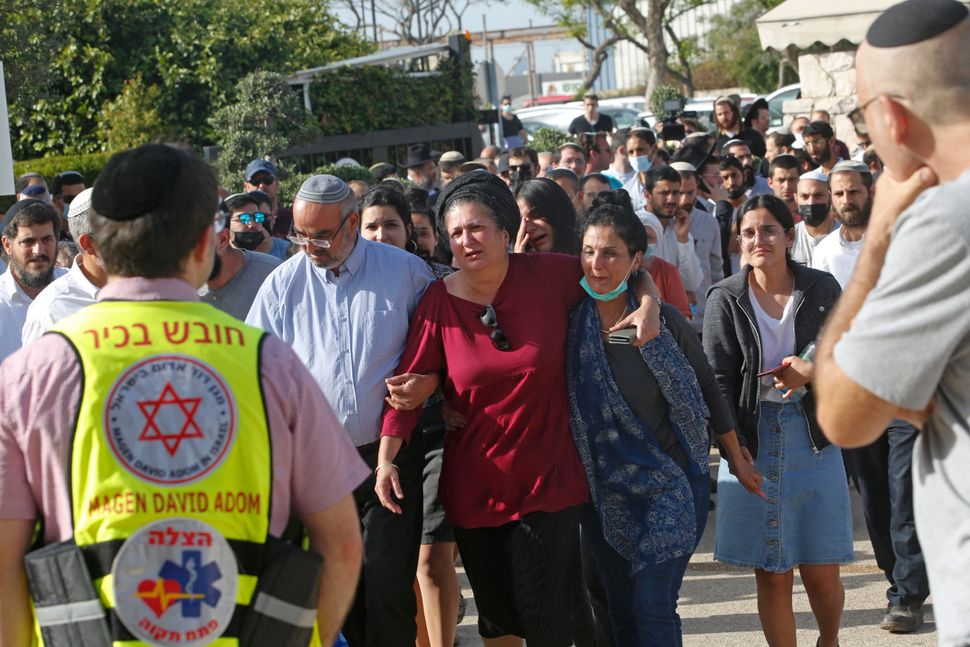 Mourners attend the funeral of a victim of the Lag B’omer tragedy atop Mount Meron. Photo by Gil Cohen-Magen / AFP / Getty Images

Most American Jews have likely “moved on” from thinking about the tragedy at Mount Meron on Lag B’Omer three weeks ago. But that’s not the case for those of us whose family members went to celebrate and instead ended up witnessing a tragedy beyond what anyone could have ever imagined.

A couple of days after 45 Jews lost their lives and many others were injured at Mount Meron, I wrote an article about being the mother of a son who was there. Since then, I’ve come to realize that my feelings that prompted the article weren’t so much about my son as they were about myself.

I was suffering “survivor’s guilt” — incredibly relieved that my son was alive and not physically harmed, but then feeling guilty about my relief because I knew that other parents weren’t so lucky. Constantly thinking, in particular, of moms who had lost their children.

Within hours of my article being posted online, I started to receive emails and Facebook messages. At first, I heard from moms like me — liberal Jewish moms whose sons had become haredi. They personally related to my story and my pain. It felt really good to connect with these other moms “like me,” who were simultaneously experiencing the same relief and guilt that I was.

But in the next few days, something remarkable happened. My article made the rounds in the Orthodox community, and I received emails and Facebook messages from Orthodox moms who live very different lives from mine.

Some had sons who had been at Mount Meron, and others didn’t. Having read that I live in Philadelphia, one mom asked if we could get together when she’s next in Philadelphia visiting her relatives; another mom from Philadelphia who had made aliyah and now lives in Israel asked me to let her know if I needed her to take anything to my son in Jerusalem next time she’s visiting.

A Hasidic mom from Jerusalem sent me a picture of her family — her sons with their long curly peiyos (sidelocks) and her husband with his long beard, herself modestly clothed in a dress and wearing a wig. Several of her sons had also been at Meron, and they had survived physically unharmed. Like me, she was struggling with her simultaneous feelings of gratitude that her sons were okay, and grief for others who had not been so fortunate. She shared that her oldest son was to be married in two weeks, and she wondered how she could celebrate when others were feeling such pain.

I responded, noting, among other things, how the breaking of the glass at the end of a Jewish wedding is meant to remind us that even at our happiest moments, we must remember that the Jewish people have suffered great tragedies, and how it’s the very precarious nature of life — of which the events at Mount Meron reminded us all too well — that makes life so precious. I joked at the end of my email that this may be the first time that a Reform Rabbi has sermonized to a Hasidic woman. We’ve continued to email, and she’s invited my son to spend Shabbat with her family (he’s excited to go). I look forward to meeting her in person when I’m next in Israel.

I don’t typically interact with Haredi women. For the last several years that my son has been immersed in the Haredi world, many of his friends’ mothers have been incredibly kind to him, welcoming him into their homes and including him in Shabbat and holiday celebrations. But I’ve been watching from the sidelines — hearing from him about their hospitality, and grateful from afar for their kindness, but not connecting with them on a personal level. And, to be honest, I had absolutely no desire to do so. But now, even if it’s just by email at this point, I’m forming my own independent relationships with several haredi mothers.

One of the haredi women I’ve been emailing with put it best: “It feels very healing to me to be able to connect with you as two Jewish mothers who inhabit different worlds and yet very much the same world.”

Rabbi Robyn Frisch is the Director of the Rukin Rabbinic Fellowship for 18Doors. She is also the Spiritual Leader of Temple Menorah Keneseth Chai in Philadelphia.

Grieving the Mount Meron disaster, I connected deeply with Haredi moms for the first time