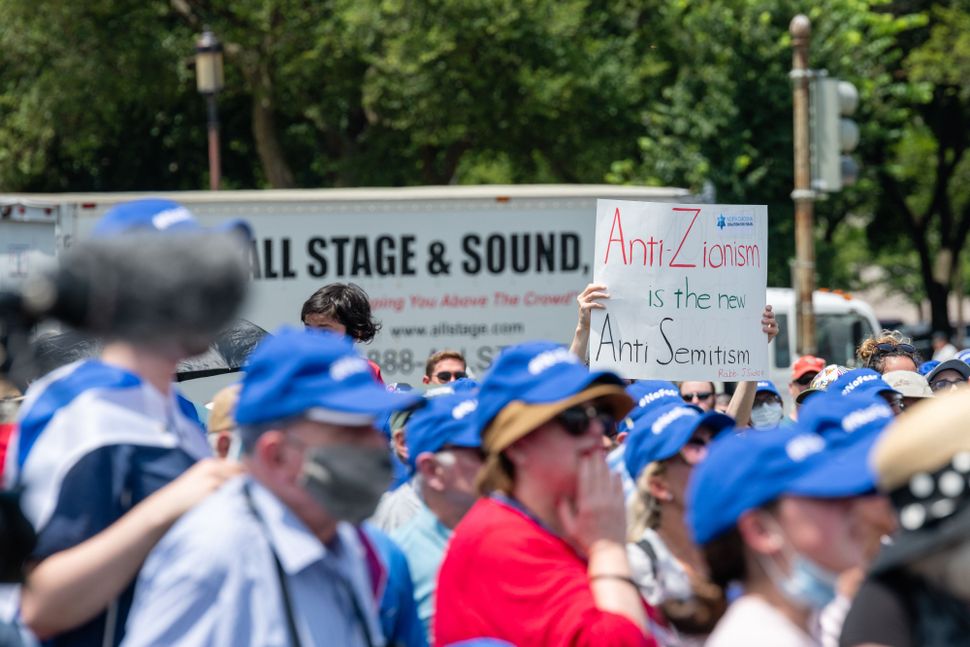 By Eric Lee for the Forward

Last Sunday, thousands gathered in the nation’s capital to protest a rise in antisemitism.

The “No Fear: A Rally In Solidarity With The Jewish People” event was organized in response to the global uptick in antisemitic attacks during the last round of violence in Israel, the West Bank and Gaza in May.

The rally brought together more than 100 Jewish groups and especially emphasized the connection between between antisemitic violence and anti-Zionist rhetoric. In an interview with the Forward, one organizer said that “a lot of the antisemitism in the United States being articulated as anti-Zionism. To me, it’s for the most part one in the same.”

Not everyone was pleased by this framing. At the Forward, we asked two of our contributing columnists — Ari Hoffman and Joel Swanson — for their perspective on the event.

The Book of Esther tells us that two thousand years ago, the Prime Minister of the Persian Empire had a hankering for Jewish genocide. But in the face of such dire threats, the Jews banded together, rent their garments and prayed. Esther played a starring role, but behind her were thousands of Jews banding together to lend one another strength and hopefully bend the arc of persecution in the process.

In the year 2021, Jews still instinctually read from the same playbook, because the threats to their welfare have persisted. This past Sunday, thousands from all over the country gathered in front of the Capitol in Washington, D.C. for an event entitled “No Fear: A Rally In Solidarity With The Jewish People” sponsored and backed by the usual alphabet soup of Jewish organizations.

The rally’s title is wishful thinking, because there is in fact plenty of fear to go around and of late a disproportionate amount of it stems from the attacks on American Jews that have ensued from the latest round of fighting in Gaza.

By nearly all accounts, the battle between Hamas and Israel spilled over to include violence against Jews worldwide. In London, cars draped in Palestinian flags targeted Jews on the streets. In Los Angeles, diners enjoying a sushi dinner were attacked in the name of Palestine, required to identify themselves as Jews and then subjected to assault. In New York, Jews were attacked on the streets, also in the name of a liberated Palestine. Synagogues were defaced. In the virtual arena, anti-Israel vitriol seamlessly merged into pure antipathy toward Jews.

The range and vehemence of this eruption, along with the way in which some excused and abetted it, set off alarm bells in the collective Jewish psyche. Academic distinctions between anti-Zionism and antisemitism dissolved in the face of this explosion and it seemed as if the antisemitism preceded the anti-Zionism, rather than the other way around.

In the face of all this, a rally was exactly the right response. One year after multitudes took to the streets to protest injustice, Jews did exactly the same thing Sunday. Antisemitism is never really about the Jews: they are just its targets. But it concerns us intimately and to speak up is to share that concern with anyone who will listen.

Jews as a whole have never been able to agree on political, moral or theological disputes and disagreeing respectfully is a major part of our textual and historical tradition. Which is why I’m troubled to see you begin by citing this past Sunday’s “No Fear” rally at the United States Capitol as an example of “coming together” in the face of persecution, when it seems so apparent that the rally actually represented an attempt to exclude progressive Jews from the American Jewish community.

Take, for example, the fact that the rally organizers declared that, “Haters and one-staters are not welcome — if you’re calling for the forced expulsion of Arabs, or the end of Israel as a Jewish and Zionist state, then stay away.”

But in truth, as Americans for Peace Now (one of many progressive Jewish groups excluded from the rally) pointed out, this line against advocating for one-state, was, in practice, only enforced against those on the left who advocate for one binational state with voting rights for all and not against those on the right who oppose Palestinian statehood and so support one apartheid state. Groups that publish maps that combine the West Bank and Israel into one single state were invited to the rally as co-sponsors, while groups such as the Zionist Organization of America which explicitly oppose Palestinian statehood were also completely welcome.

Even mainstream liberal Zionist groups like J Street, which explicitly advocate for a two-state solution to the Israeli-Palestinian conflict, were unwelcome at the rally. Early promotional materials for the rally declared that it would span “from J Street on the left, ZOA on the right and everyone in between.” But the language welcoming J Street to the rally was removed at the behest of Morton Klein of the Zionist Organization of America, a group which, again, explicitly opposes Palestinian statehood.

Ari, you rightly note in the wake of the recent Gaza conflict, antisemites often collapsed the distinction between Jews and the state of Israel, blaming American Jews for the actions of a state where we do not live. But if we want to oppose the rhetorical use of the state of Israel to legitimize antisemitism against American Jews and the broader Jewish diaspora, why make Israel politics a litmus test for participation in a rally against American antisemitism?

Moreover, examples of the right-wing slant of the “No Fear” rally abound. A deputy assistant to President Biden who came to represent the White House was booed — despite the fact that the vast majority of American Jews voted for Biden. Followers of Meir Kahane — an advocate of expelling Arabs from Israel, despite the promises of the rally organizers – were represented at the rally, even though organizers promised they would not be.

In light of these findings, it’s striking that the organizers of the “No Fear” rally did not even attempt to represent this American Jewish consensus. Instead of uniting American Jews against antisemitism, it seems clear that their real purpose was to determine which Jewish political views are acceptable

In general, I believe in a big tent approach and certainly the weeks before Tisha B’Av, which commemorates the destruction of the ancient Temple in Jerusalem because of baseless hatred between Jews, is as good a time as any to champion Jewish solidarity. To paraphrase the great Chief Rabbi Avraham Yitzchak HaKohen Kook: the counter to baseless hatred is unconditional love.

But that goes both ways. Groups like J Street, T’ruah and Americans for Peace Now declined invitations to co-sponsor the rally. They weren’t excluded: they absented themselves. A boycott is not the same as being snubbed. It’s like standing up your date and claiming you’ve been ghosted.

The reality is that the phenomenon of antisemitism on the left is still denied by many Jews whose first commitment is to progressive politics. IfNotNow, the tip of the anti-Israel spear within the Jewish community, has defended comments accusing Jews of being part of the “ownership class.” A Philadelphia food festival disinvited an Israeli food truck after so much vitriol that they could no longer guarantee its safety.

All of this is to say that a rally against antisemitism that entirely omits Israel, as many left-wing organizations wanted, would be preposterous. It would be like a St. Patrick’s Day March that didn’t mention Ireland. But there is a deeper issue at play. The vast majority of American Jews consider Israel and Zionism as core to their identity. They see that the upsurge in antisemitism is intimately connected to anti-Zionism being mainstreamed.

The simple reality is that the upsurge in antisemitism in recent months, which has so unnerved so many of us, is directly tied to hostility to Israel. That might be an inconvenient truth for many, but it is still the truth.

Moreover, only a quarter of American Jews actually describe themselves as very emotionally attached to the state of Israel. And a new survey finds that fully one quarter of American Jews now believe Israel is an apartheid state, while a third believe “Israel’s treatment of Palestinians is similar to racism in the United States” — views that would no doubt place a substantial portion of the American Jewish community within the category of “haters and one-staters” that the organizers of the No Fear Rally want to cast out.

So it seems that Israel may not be quite as key to the identities of American Jews as you argue it is, nor as big a source of agreement and concord among American Jews as the organizers of the No Fear Rally want to pretend that it is.

There are many ways to care about Israel and to make it central to one’s identity. I have no doubt that supporters of J Street, a group that calls itself “the political home of pro-Israel, pro-peace Americans,” would say that supporting Israel is an important part of their Jewish identities. It’s just that for those American Jews, supporting an independent Palestinian state is part and parcel of their support for Israel, rather than in conflict with it.

You could have held a rally that denounced the genuinely alarming rise in antisemitism linked to the Gaza conflict without excluding groups like J Street, who wanted to participate in the “No Fear” rally and were originally slated to do so. But that would mean acknowledging that American Jewish opinions on Israel span a large spectrum and are in fact not entirely concentrated on the political right.

Moreover, a genuine rally against rising antisemitism in the U.S. in 2021 would also have to center the fact that the coronavirus pandemic, just as much as the Gaza conflict, has fueled rising antisemitism, such that researchers at Tel Aviv University found the pandemic sparked a rise in “accusations that Jews, as individuals and as a collective, are behind the spread of the virus or are directly profiting from it,” which they compared to the age-old medieval blood libel.

But confronting COVID-related antisemitism – which, again, is dramatically on the rise in 2021 – would require acknowledging that most of the comparisons of vaccination to Nazism and the Holocaust are coming from the political right, not the left. That acknowledgment could have easily coexisted with a rally that also denounced left-wing antisemitism linked to the Gaza conflict. But that isn’t the event that the “No Fear” rally organizers planned.

The organizers of the No Fear Rally do not want American Jews like me – or, for that matter, like the fewer than half of young American Jews who consider themselves attached to the state of Israel – to be part of their movement. They’ve made that very clear and, and so I have no choice but to return the favor.