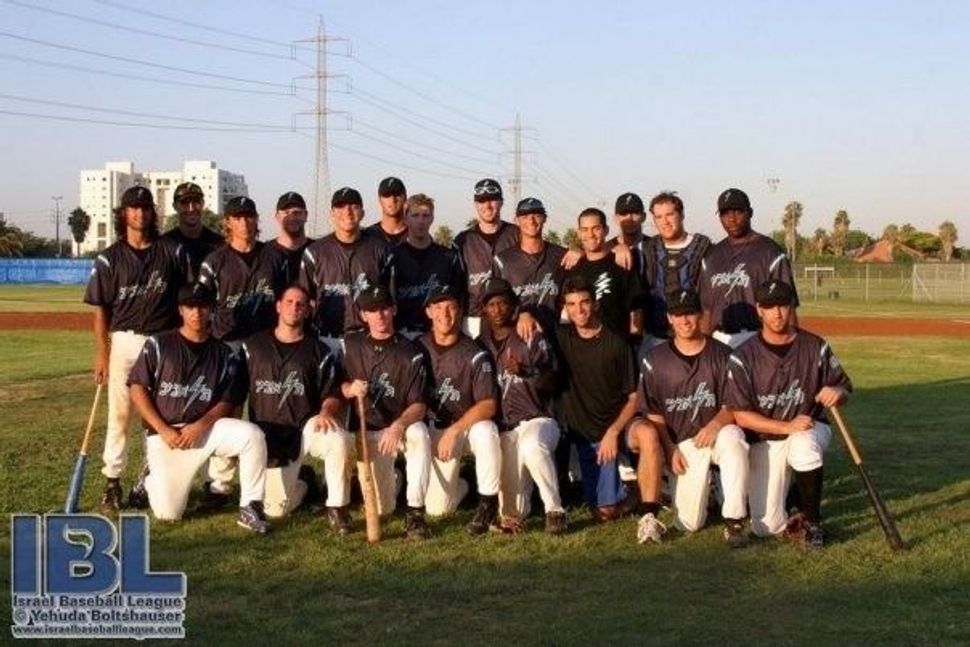 As Israel’s Olympic baseball team makes its way to Tokyo, they might capture more hearts here in America than back home. After all, it feels like there are more baseball diamonds in my town of Maple Glen, Penn., than there are in the entire country of Israel.

But while baseball may not be at the heart of Israeli culture, the successes and the timing of this Olympics gives Israel’s team the great opportunity to add significance to the most essential of Israeli emotions — hope.

Growing up on Long Island, New York, my hope, like so many young Americans, was to play major league baseball. Unlike most Americans, I would often write about this dream of playing ball in Hebrew, for class assignments at Solomon Schechter Day School of Nassau County. Baseball was a large factor in my choice to leave Jewish Day School after eighth grade and attend public high school. The decision led to one of the most formative experiences of my life so far – co-captaining the 2003 Class AA Nassau County and Long Island Championship Plainview Hawks. We lost the New York State championship game, but it was a journey that will guide me for the rest of my life.

As one high school teammate got drafted by a major league team and many others headed off to Division I colleges, this formative experience also marked the time when I began to lose hope that I would play major league baseball.

During opening convocation at Division III Muhlenberg College, in Allentown, Penn., we were asked to write a note to our future selves. After playing four years of varsity baseball at Muhlenberg, tears of joy rolled down my face when I opened that letter during graduation festivities. There on that paper, I found the words, “Did you do everything you could to play pro ball?”

As I read that question, my contract was already signed and my plane ticket was already booked to fly to Israel to play for the Tel Aviv Lightning in the first (and only) season of the Israel Baseball League. Had I written, “Did you get drafted by a big league team?” Reading the letter would have been a complete letdown. But, thankfully, that’s not the question I asked. Now, as a rabbi, thinking back on that moment all these years later, I realize something new about that question. I was unknowingly asking my future self – “Did you hold onto the hope?”

It was my first time in Israel when I went to play ball. I was excited to practice my Hebrew and I anticipated encountering the Israel I had imagined when learning about the country through textbooks and through the stories of those who had been there. Of course, like anyone seeing something for themselves, I was often surprised. I learned so much from all my teammates and friends. Especially the Israelis who shared generously and candidly about their life experience. It was through conversations on the bus rides to and from the field when I internalized the fact that Israel was simultaneously a country with incredible achievements and a country that, like every country on earth, isn’t perfect.

What astonished me most from my season in Israel was that even the Israelis I met who were the most critical of their country, had a palpable sense of hope. It is that hope that ultimately led me to rabbinical school. Now as a 35-year-old rabbi, I no longer hold onto the hope of playing pro ball, although I do still play hardball in the Greater Philadelphia Men’s Adult Baseball League. Instead, the hope I cling to is for a brighter future for the Jewish people and for Israel. A future when diversity and inclusion is cultivated and celebrated. I see that hope reflected in Israel’s Olympic baseball team.

To avoid sunlight shining directly into the hitter’s eyes, baseball fields were traditionally aligned so that the pitcher faced west when facing home plate. This, incidentally, is where lefty pitchers like me got the nickname “southpaw,” as their arms were towards the southern side of the field when standing on the mound.

If the pitcher is facing west, it means that when the batters of Team Israel dig their spikes into the clay of the batter’s box, they will be engaging in a ritual far greater than baseball.

Assuming the fields on which they play adhere to this old cartographical tradition, these athletes will become the latest group of folks to do something that has been done for thousands of years: wear fabric of blue and white and face east.

Team Israel represents a new hope that may not have been in the consciousness of the early Zionist thinkers, an inclusive hope that will echo from the baseball stadiums of Japan and the halls of the Knesset, to the cities and streets of Israel and throughout the world.

In Israel’s national anthem, we’re reminded that “so long as forward to the East the eye gazes towards Zion, our hope is not yet lost.”

The words of Hatikvah left out many who are essential to Israel’s story, including Mizrachi Jews who for centuries faced west towards Jerusalem in prayer and Ethiopian Jews who faced north and the people of Christian, Muslim, Druze and Baha’i faiths with whom the Jews mentioned in Hatikvah share in collective hope. But the diverse players of Team Israel are reimagining what it means to face east with purpose and clarity. Some of them, like Tal Erel and Shlomo Lipetz, grew up in Israel; most did not. Most grew up with a strong and consistent connection to Judaism; some of them, like Ian Kinsler and Ty Kelly, did not.

Now, unified by Israeli citizenship, Team Israel is uniquely poised to expand the definition of hope in an increasingly diverse Israeli society today.

The team has likely fielded many questions about their Israeli-ness; critics are quick to point out that very few of the team members were born in Israel.

But those kinds of questions are less about the team and more symbolic of the failure of those asking the questions to fully understand the miracle of the modern state.

Yes, the miracle of Israel is the fulfillment of a Jewish hope to be a free people in our land. But it is also so much more than that.

Rabbi Jason Bonder is the Associate Rabbi of Congregation Beth Or in Maple Glen, Penn. He played baseball for the Tel Aviv Lightning in the first and only season of the Israel Baseball League in 2007.