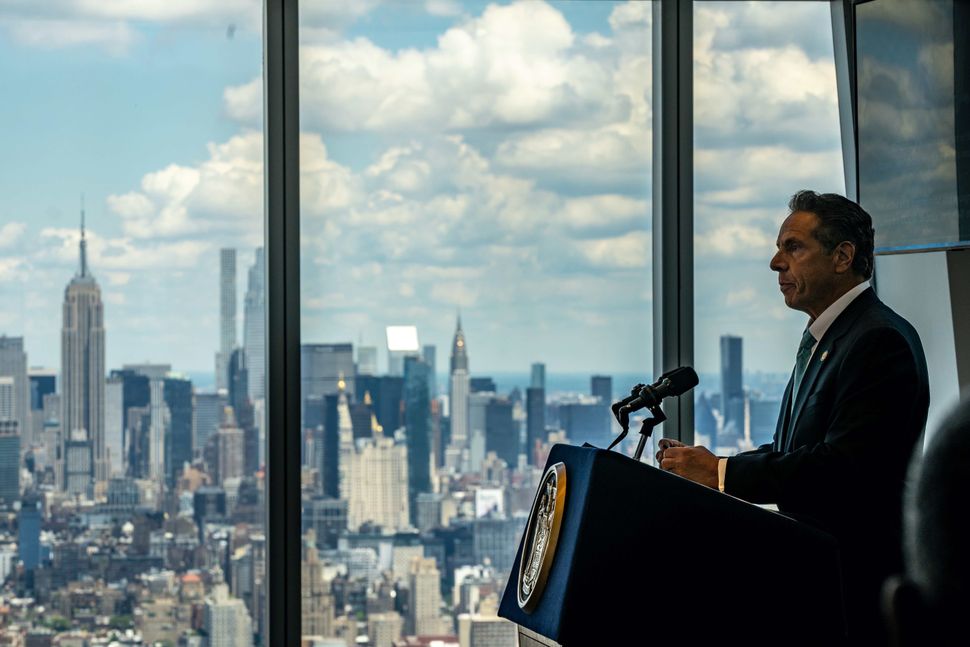 With virtually every party leader calling for his resignation, Gov. Andrew Cuomo had little choice but to step down.

Yet it took Cuomo 89 seconds into his resignation speech on Tuesday to get to I’m-sorry-you’re-offended — which he followed with excuses, swipes at his accusers and denials of bad behavior.

My colleague Mira Fox wrote that his apology was “a decent first step — especially considering that it was paired with a meaningful action.”

I’m not so optimistic. Though 18 minutes in, Cuomo did finally give us something to work with.

Addressing his daughters, Cuomo said, “Your dad made mistakes. And he apologized. And he learned from it. And that’s what life is all about.”

I’ll assume this statement is aspirational — because the first step of learning from one’s mistakes is not issuing triumphant proclamations, but embodying quiet humility. As the Catholic scholar Marcellino D’Ambrosio writes, “seven deadly sins are identified from which all other sins flow. The deadliest of these seven is pride.” And as the Book of Proverbs puts it, “When arrogance appears, disgrace follows; wisdom is with those who are unassuming.”

It’s very easy to say “I apologize” when you’re backed into a corner. It’s very hard to actually repent for bad behavior — to spend time in quiet reflection, out of the spotlight, thinking about what you’ve done wrong and how you’ll change your life to avoid repeating similar behaviors in the future. For Cuomo to have any hope at all of salvaging his legacy, it’s time to stop talking and start taking his own advice.

In even the shortest version of the process of repentance, repairing the harm you’ve done to someone else takes a very long time. In the traditional Jewish framework, we must recognize that what we did was wrong, regret what we did, stop doing it, feel bad about having done it, sincerely apologize to the people we have harmed and ask for forgiveness, resolve not to do what we did again, increase our good behavior in other arenas, and actively work on becoming more self-aware in general.

Even for the best of us, trying to change a deeply ingrained behavior or make up for serious harm might take years, if not a lifetime. It’s very likely that you might even die still trying.

One 13th-century Spanish rabbi provides a poignant example. Rabbi Yonah of Gerona led the demonization of the rationalist rabbi Maimonides, even going so far as to burn Maimonides’ works in the streets of Paris. When the Dominican Catholics, inspired by Rabbi Yonah’s fervor, started burning cartloads of volumes of Talmud as well, he realized the terrible folly of his actions.

Rabbi Yonah spent the rest of his life trying to atone for his behavior. He vowed to make a pilgrimage to Maimonides’ grave in Israel in order to spend seven days requesting forgiveness in front of ten witnesses; he was stopped by the Spanish authorities on the way there, and never made it. When he became a distinguished Torah teacher in Toledo, he deliberately incorporated Maimonides’ teachings into his lectures and curriculum. He wrote several thick volumes on atonement and regret, including the 683-page “Shaarei Teshuvah,” The Gates of Repentance, a severe and intense guide to the agonizing steps required to truly atone for what one has done wrong.

Judging from Cuomo’s words and actions, he seems to view the process of moving on more as one of wiggling away: cast doubt on the accusers, vaguely apologize, remove yourself from the scene (sort of), remind us that you love your children and the accusations made against you hurt them, and insist that what you did was not really so bad, anyway.

It wasn’t a great look. But the words he let slip when addressing his daughters reveal that he might know the real hard truth deep down.

After sincerely admitting his behavior and apologizing, as Cuomo himself framed it, next must come the process of learning from what happened — and making this learning what the rest of his life is all about.