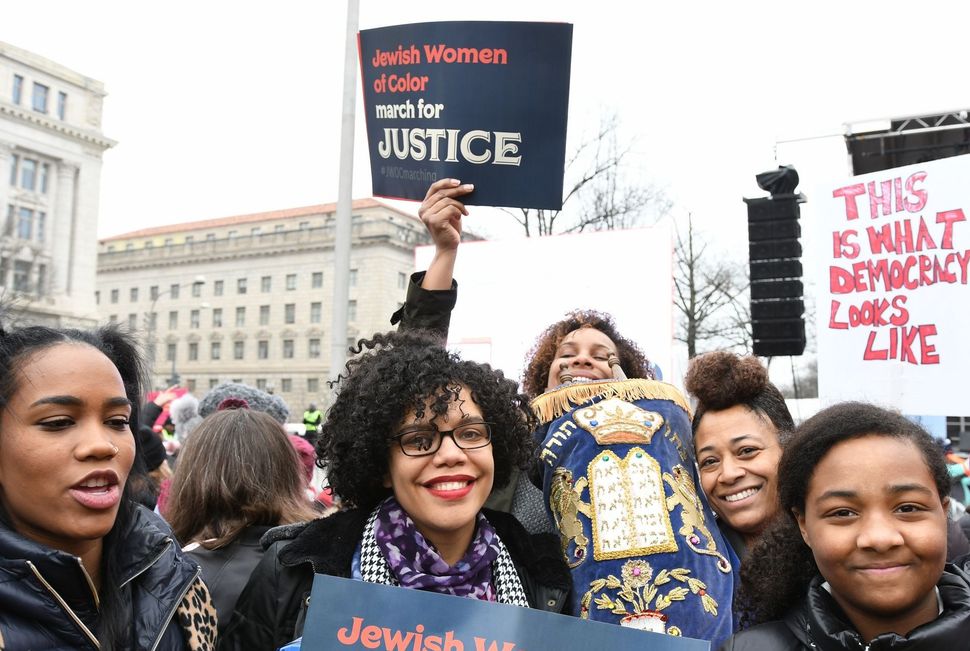 Jewish women of color were front and center at the National Women’s March in Washington, D.C. on January 2019. Image by Candace Bond

If you’re looking for a guide to the perplexities of “Beyond the Count: Perspectives and Lived Experiences of Jews of Color,” a good start might be not to think of it as one single study.

It’s really two, and they might have been better titled as “Who exactly are Jews of Color anyway?” and “So what do Jews of color think?”

The work, or both of them, was commissioned by the Jews of Color Initiative, and involved a slew of impressive academics who tabulated the responses of 1,118 participants identified as Jews of color.

It began with describing the term.

“‘Jews of Color’ is understood as an imperfect, but useful umbrella term that encompasses a wide range of identities and meanings,” the narrative reads.

“Those who self-identified as JoC in this study used the term in a multiplicity of ways: as a racial grouping (e.g. Black, Asian, and multiracial Jews); to indicate national heritage (e.g. Egyptian, Iranian, and Ethiopian Jews); to describe regional and geographic connections (e.g. Latina/o/x, Mizrahi, Sephardic Jews); and to specify sub-categories (e.g. transracially adopted Jews and Jewish Women of Color).”

Then there are those who, while clearly falling into one or more of the above categories, may not themselves identify as “of color,” even if the majority of people who encounter them have no problem assuming what they are. Race, as everyone from Rachel Dolezal to the self-described “Cablasian” Tiger Woods can tell you, is as much defined by how others see you as how you perceive yourself.

After defining its terms, the report offers a wealth of demographic information about the Jews of color it studied — with the caveat that it was not based on a weighted sample to project the total size and makeup of the community, but a voluntary survey circulated mainly among engaged Jews of color. While it is just a snapshot of those respondents, it is the largest and most detailed such snapshot ever produced. Some highlights are:

That last category certainly seems to underscore what I said earlier about the study not representing Jewish population of color as a whole; it would make our communities vastly more female-dominated than the general population.

Then again, the overwhelming majority of children adopted from China were girls until recently, according to a Pew study, which would likely skew the gender spread of Jewish adoptive families.

And I should probably check my own progeny before questioning other people’s math: I have one daughter; she has two children — a boy and a girl. While statistically beyond insignificant, it matches the sampling precisely: Two-thirds of my descendants are female Jews of color.

If the study’s analysis of who we are is food for thought, its account of what we think is a banquet:

If that’s a dire picture, it’s not exactly news. Jews of color have been pointing out those failings for years, in numerous accounts in the Jewish media and beyond. There are countless examples of worshippers being asked if they’re Jewish, or assumed to be the help, or, in a favorite experience of my own at a suburban Twin Cities synagogue, being mistaken for Rod Carew (my batting average never quite matched his, I’m afraid).

But it isn’t all j’accuse or woe is me. More than half “agreed they have felt a sense of belonging among white Jews,” the report reads, “and 41% agree they have been able to find opportunities to express all sides of themselves in predominantly white Jewish spaces.” Three quarters of the respondents described working for justice and equality — Tikkun Olam — as the most important expression of Jewish identity.

Jews of all colors might want to consider that, and the inherent responsibilities it demands. It begins by understanding who each of us is, made a little clearer with a study like this one.