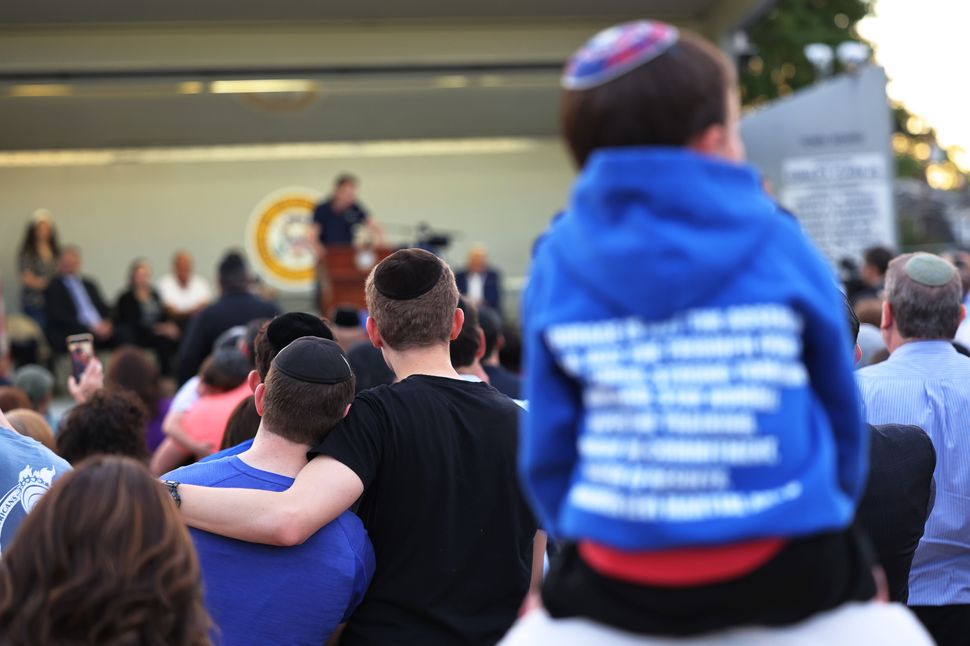 People listen to Joseph Borgen, a recent victim of a hate crime, speak during a rally denouncing anti-Semitic violence on May 27, 2021 in Cedarhurst, New York. A rally was held by various organizations and local Jewish community groups to support Borgen after a rise of violent anti-Semitic attacks in New York and across the U.S. By Michael M. Santiago/Getty Images

(The Anti-Defamation League, which has been closely tracking antisemitic incidents since 1979, recorded just 34 such assaults throughout the United States in 2020.)

The 3% statistic should set off alarm bells for anyone familiar with data science not only because it suggests a staggering number of violent incidents that somehow escaped the attention of journalists, politicians and Jewish organizations. Any low single-digit survey result is suspect because it might fall within the margin of error — as in this case, since the margin in the AJC survey is 3.9%. That means if the survey were repeated many times, the “yes” answer to this particular question would likely range from zero to 6.9%.

All surveys have margins of error. AJC’s pollsters cannot possibly reach all 5.8 million of us, and they don’t have to. The representative sample of 760 people interviewed by phone and another 673 completing a web survey can give us some useful insights into our collective experiences and attitudes. But data always need to be considered in context, and AJC — like many similar groups — left that context in small print while highlighting the scariest of its findings.

“The overall picture that emerges from the report,” an AJC spokesman, Avi Mayer, wrote in a USA Today OpEd, “is grim.” In an essay about the survey on the group’s website, Mayer made the dubious assertion that 3% of American Jewish adults — again, that would be 174,000 people — said they had been assaulted by antisemites in the past 12 months.

“One in every four American Jews have been the victim of antisemitism over the past year,” he said ominously.

Some of the survey results are indeed grim. More than 80% of Jewish respondents said that antisemitism had increased in the U.S. over the past five years. A quarter said Jewish institutions they were connected to had been subjected to antisemitism, and 17% to 25% said they had avoided wearing Jewish symbols, attending events or posting things online for fear of antisemitism.

But other results are pretty encouraging. Despite their perception that antisemitism is on the rise, 57% said they feel just as secure now as a year ago, and 11% reported feeling more secure. Of those who use social media, a cesspool of hate and conspiracy theories, 88% said they had not been the target of any antisemitic remark or posts. Two-thirds said law enforcement has been somewhat or very effective in responding to the security needs of American Jews.

The AJC report, along with one published Monday by Hillel International and the ADL about antisemitism on campus, is useful, informative and important. But the way that such survey results are presented — to the public and in private meetings with policymakers — has real-world consequences.

Groups that commission these surveys often stand to benefit from depicting antisemitism as a growing and urgent problem; fear-mongering makes for good fundraising. In this case, the findings are likely to also be used to advocate for policies that limit free speech — policies that many American Jews supposedly represented by these surveys would chafe against.

In order to persuasively advocate for such policies, AJC uses a rhetorical sleight that obscures both American Jewish perceptions of specific political groups, and their views of where antisemitism is most likely to be rooted.

Thousands of data points illustrate that most antisemitic incidents in the United States are committed by individuals with no particular ideology, not people connected to extremist political groups — “average Janes and Joes,” as Oren Segal, director of the ADL Center on Extremism, once put it to me. But for those antisemitic incidents that can be linked to extremist organizations, virtually all were committed by people with ties to white-supremacist groups, according to the ADL.

Given this, the way that the AJC’s promotional materials frame American Jews as equally concerned about — and targeted by — left and right wing extremists is misleading.

“Large majorities of American Jews continue to view the far right and extremism in the name of Islam as representing serious antisemitic threats,” Mayer wrote in the USA Today column, under the headline “Hate is on the rise: Antisemitism surges on America’s far left and far right.”

If appearing nonpartisan in media reports were the only aim, this rhetorical flourish would not be much of an issue. But as Mayer told me when we spoke, the AJC is “an organization that prides itself on data-driven advocacy” — and actively uses this data to advocate for specific policies.

These surveys, Mayer said, “give us the data we need to advocate for stronger policies against antisemitism, for stronger measures against Jew hatred and all forms of hate and bigotry” when speaking with “interlocutors in government, in other faiths and ethnic groups, and elsewhere.”

In AJC’s survey of the general American public, 85% of respondents agreed that the statement “Israel has no right to exist” is antisemitic. Mayer highlighted this on social media, tweeting, “Anti-Zionism isn’t antisemitic, you say? Well, American Jews — and the U.S. general public — disagree.”

In our conversation, Mayer extended this to assert that “both Jews and non-Jews regard anti-Zionism as a form of antisemitism” — and added that raising this fact “in conversations with government officials, with university administrators, and in a variety of other settings…is tremendously significant.”

I asked him if lobbying social-media companies to take down or flag anti-Zionist posts would be one such manifestation of this.

Mayer confirmed both that AJC has “very close working relationships with senior officials at a variety of different social-media companies” and that the group is in “constant conversation” with those companies about this very topic.

“We as an organization certainly believe that anti-Zionist rhetoric and speech should be treated as antisemitic in every respect,” he told me. “And to the extent that there are policies that extend to hate speech on these platforms, they should be applied to antisemitic — including anti-Zionist — rhetoric as well.”

The other survey released on Monday, by Hillel and the ADL, found that a third of Jewish college students in the U.S. had experienced antisemitism in the last year, and did not clearly distinguish between, say, hearing anti-Zionist statements in a class or protest and seeing a swastika on a Jewish fraternity house.

Hillel recognizes “that many anti-Israel activities on campus include antisemitic rhetoric and tropes and contribute to the environment in which Jewish students feel isolated and unwelcome on campus,” Matthew Berger, a spokesman for the group, told me. The survey, though, simply defined antisemitism as “oppression, prejudice or discrimination directed toward Jews as individuals or as a group,” he said, and “did not ask specifically whether experiences of antisemitism were Israel-related.”

I’m no anti-Zionist, but I am deeply committed to free speech and civil discourse — especially with those with whom I strongly disagree. And while social-media companies, as private entities, are certainly not bound by the First Amendment to grant users free speech, attempts to silence others — including anti-Israel advocates and writers whose only manifestation of antisemitism is in opposing the existence of a Jewish state — should make us all uncomfortable.

If you struggle to sympathize with anti-Zionists, try flipping the players. Imagine if a different advocacy organization found in its own survey of 2,647 Americans that most view opposing a Palestinian state along the 1967 borders as Islamophobic. Imagine this group has access to executives at social-media platforms and planned to use the survey data to convince Facebook, Twitter and Instagram to take down any Zionist posts, calling them hate speech.

It’s not likely to happen anytime soon, but I certainly wouldn’t want to take the chance.

Data should help us start conversations, not end them. It’s incumbent upon those who produce surveys to represent them accurately and fairly — especially when the stakes are so high.