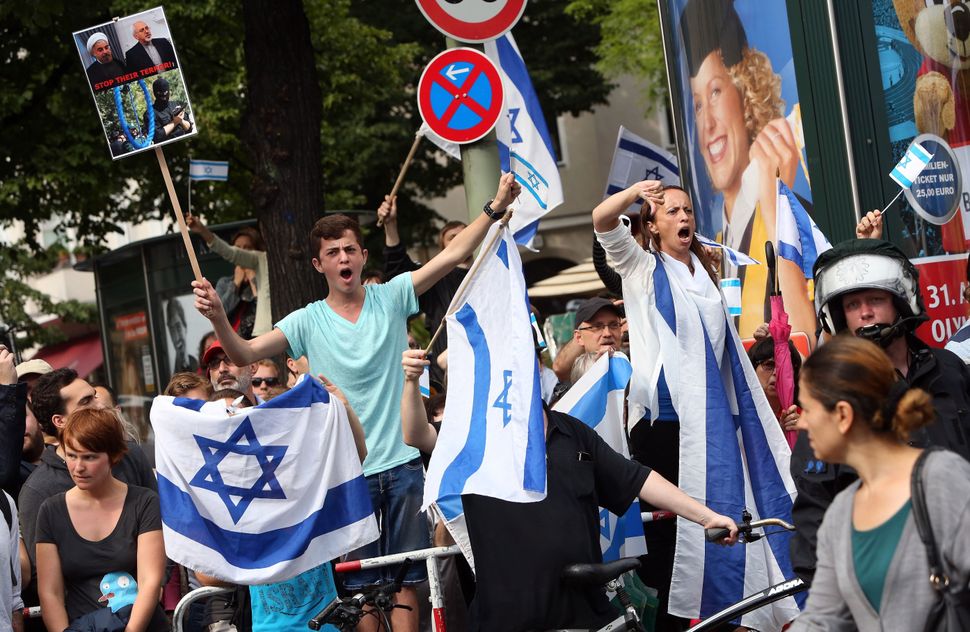 Journalist Nemi El-Hassan brought cameras inside a neo-Nazi concert in 2017, exposing the gathering to millions of Germans as she challenged the organizers over merchandise that extolled Hitler and ties to the far-right Alternative for Germany party.

“El-Hassan is a confident, hijab-wearing Muslim woman, even when at a right-wing rock concert in Themar surrounded by a bunch of bald, thickset men,” a panel of judges wrote when they awarded the report a Civis Media Prize. “The reporter braved the crowd and questioned the right-wingers – quick-witted, confrontational and fearless.”

The career of the young Palestinian-German journalist, who is also a physician, took off and this fall German public television announced her as the host of a new science program.

Then she was suspended.

“You are in the position to prove that you’re not an extremist,” said Nemi El-Hassan

A right-wing YouTube user resurfaced photos of her at a 2014 Al-Quds March, an annual event to support Palestinians and lambast Israel that was originated by Iran in 1979. Many in Germany consider it an antisemitic hotbed.

El-Hassan, 28, has apologized, but her future in journalism is now uncertain. And her case has made other pro-Palestinian activists in Germany — many of them Jewish — fearful. They see a growing tendency to brand criticism of Israel as antisemitic, a uniquely potent accusation in a country still traumatized by its Nazi history.

Local Antifa groups, known in the United States for strident far-left politics, are ardent Zionists in Germany and liberal college students who are not Jewish often turn out at marches in blue and white to aggressively clash with pro-Palestinian demonstrators. Germany’s parliament has gone further than most American pro-Israel groups to condemn boycotts against Israel.

“Any kind of advocacy for Palestine, or solidarity for Palestine, is considered antisemitic at this point,” said Emily Dische-Becker, a Jewish filmmaker based in Berlin. “There is a projection onto Palestinians as the new Nazis and it’s just assumed that everything they do is motivated by Jew hatred.”

While the debate over how to define antisemitism in the United States hinges on the nuance of how people talk about Israel, Germany has experienced far more explicit examples of hatred toward Jews masquerading as political demonstrations in recent years.

Prior to the 2014 demonstration El-Hassan attended, antisemitic crowds draped in Palestinian flags had been gathering across Germany. “Jew, Jew, cowardly swine, come out and fight on your own!” one group chanted in Berlin, while protesters in Dortmund and Frankfurt cheered, “Hamas, Hamas — Jews to the gas!” Some experts have pinned a significant increase in antisemitic street violence to the millions of asylum-speakers from Muslim countries like Syria, Afghanistan and Iraq that the German government has welcomed in recent years.

Contemporary accounts of the Al-Quds Day March said that it had stayed away from that kind of antisemitism, with organizers emphasizing that they were not protesting Jews. But later reports described many of the same offensive chants at the event, and El-Hassan apologized for her attendance after photos of her flashing a “V” sign with her fingers emerged in the press.

The Jewish establishment in Germany has expressed its concern about El-Hassan’s role hosting the science show on WDR, a public broadcaster, after the images became public.

“The public broadcaster has a great responsibility not to present anyone on the screen who has spread hatred of Israel and anti-Semitism,” Josef Schuster, president of the Central Council of Jews in Germany, said in a German statement earlier this month.

The German press has been less restrained. Bild, a German tabloid known for its inflammatory tone and massive political influence, seized on the story two weeks ago under a banner declaring: “Islamism scandal at WDR.” 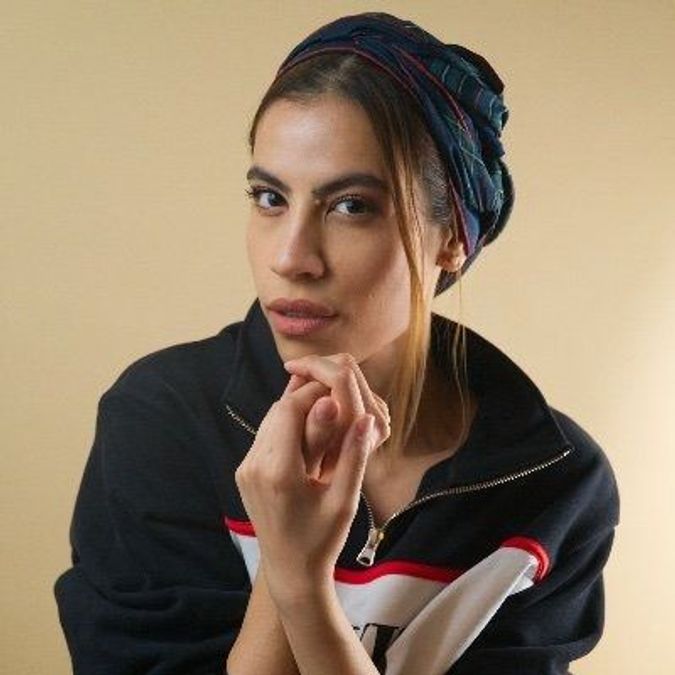 “I knew this was the way media and society treats Muslim people, basically, but it was still very hard to experience firsthand,” El-Hassan said in a recent interview with the Forward. “You are in the position to prove that you’re not an extremist.”

At the height of controversy, the newsweekly Spiegel noted that El-Hassan began crying as its reporters asked about her religious beliefs and why she stopped wearing a headscarf, after grilling her about a school trip she made to a controversial Hamburg mosque as a 15-year-old.

El-Hassan’s apology appeared to calm the storm for a few days before Bild ran a new article tagged, “‘Likes’ for Antisemitism,” that focused on her engagement with a series of Instagram posts from Jewish Voice for Peace, the left-wing American group that supports a boycott of Israel. The newspaper reported Tuesday that El-Hassan would not be allowed to host the science show, but might be kept on as a writer for the program.

While establishment groups in the U.S. like the American Jewish Committee and Anti-Defamation League describe the Boycott, Divestment and Sanctions campaign aimed at Israel as a haven for antisemites, they acknowledge that it also has followers who have a sincere interest in human rights. In contrast, Germany’s parliament declared BDS antisemitic in 2019 and there has been a recent push to declare it an extremist movement that would be subject to surveillance by federal police.

El-Hassan said she has never personally supported BDS and has twice visited Israel, where her father was born, once to participate in an art program with Israeli youth and again with a delegation of medical students. But she acknowledged “liking” a Jewish Voice for Peace post cheering on a boycott of several large companies that do business in Israel and said she doesn’t believe BDS is antisemitic.

“I think it’s fair enough for every person who is living under occupation to make that decision for themselves,” El-Hassan said.

The Central Council of Jews in Germany, the World Jewish Congress and the American Jewish Committee, which has an office in Berlin, all declined to comment on El-Hassan’s case or the discourse around BDS in Germany.

Much of the country’s broad support for Israel and hardline reaction to any flickers of antisemitism is rooted in shame and remorse over the German public’s complicity in the Holocaust. But as the far-right grows in the country, left-wing and “Islamist” antisemitism has become an easy target for Germans who are reluctant to focus on the rise of the xenophobic Alternative for Germany party, which is pro-Israel, or the alarming number of German police and military members who have been found to be harboring antisemitic views.

“They don’t like to look at their own antisemitic problems, so I was a popular case,” El-Hassan said.

Branding Palestinian advocacy as antisemitic has also placed left-wing Jews in Germany in a bind. Jewish Klezmer musician Nirit Sommerfeld has found it difficult to book German venues and receive public subsidies without attesting that she won’t say anything antisemitic at her performances, where she sings about Kristallnacht and Hanukkah. And Peter Ullrich, a sociologist with the Centre for Research on Antisemitism at the Technical University of Berlin, recounted the case of a group of Israeli artists who were about the Israeli occupation of the West Bank at an arts college in Berlin.

Ullrich said that in order to maintain the position that supporting Israel is an appropriate way to atone for the Holocaust, German society must take a hard line against anti-Zionist Jews, whose activism undermines that belief. The irony, said Ullrich, is that it is easy to view the attempt by German authorities to crackdown on leftist Jews as its own form of antisemitism.

“This is really a strange turn,” Ullrich said. “They are sorting between good and bad Jews.”

But Ullrich said El-Hassan’s case, along with that of some Jewish activists, is helping to create a genuine conversation around Israel politics in Germany that has been long shut down at the first mention of antisemitism. Hundreds of progressive leaders signed a letter defending her, and El-Hassan herself hopes that the controversy will force more careful assessments of claims around antisemitism in Germany.

“I’m not at the point to think about my future in journalism and whether there is still a career lying ahead for me or not,” she said. “As a society, I hope that in the future we will be able to distinguish between political claims that are fair and that should be discussed, and antisemitism that of course needs to be fought against.”