For African Hebrew Israelites, threats of deportation are dehumanizing — and déjà vu 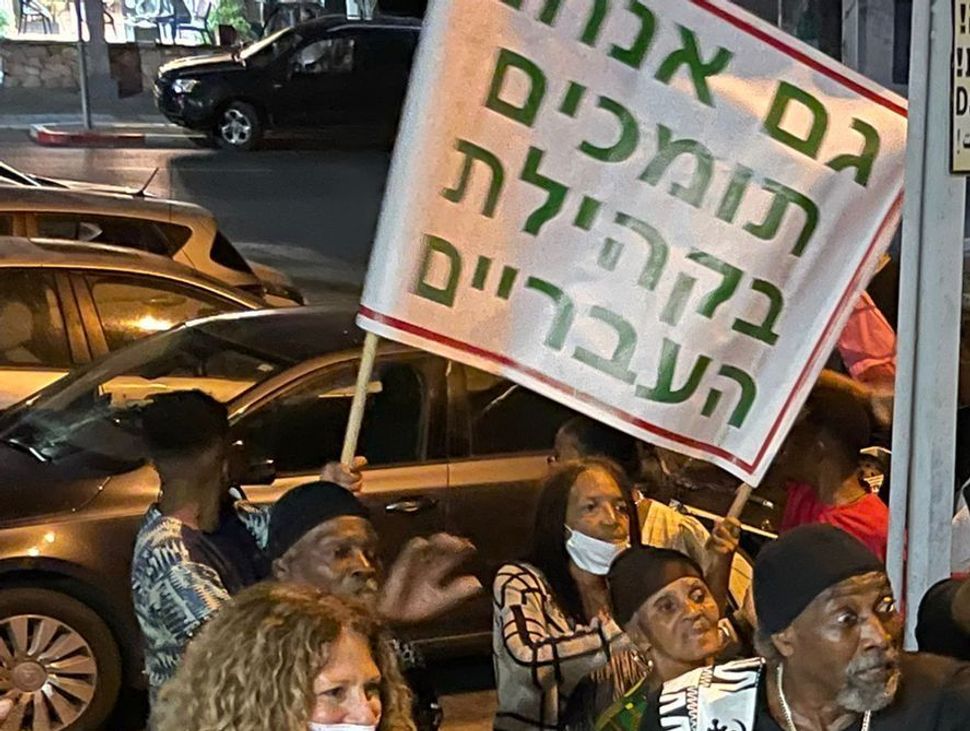 Last April, Israel’s Interior Ministry sent letters threatening 51 members of our community — including those for whom Israel is the only home they’ve ever known — with deportation within 60 days. Since then, an administrative appeals court has issued a temporary stay, but the threat remains. With it comes an overwhelming sense of déjà vu. We have been here before.

In the 1970s, dozens of our men were sporadically arrested at work sites in the Negev, imprisoned for weeks without contact and then processed for deportation. Family members would only hear from them weeks later — upon their arrival in New York, in the same clothes that they set out for work in. Some were able to make it back to their families after many years of bureaucratic haggling. Others never recovered from the experience — and never returned.

It happened again in 1986, when 46 members of our community were arrested at a citrus packing plant in the central Israeli town of Rehovot. Men, women and children ranging in age from 17 to 65 were roused from their sleep in the pre-dawn hours. Dozens were eventually deported, while the rest of the community members engaged in a protracted struggle that saw many renounce their US citizenship in order to prevent deportation and the separation of their families.

As Passover approached that year, we organized a protest march of the entire community to Jerusalem. On the morning of the planned march, we awoke to find our compound surrounded by police and IDF units – brandishing riot batons and shields, tear gas, dogs and, no kidding, sniper units on neighboring rooftops and ridges — in an effort to discourage our trek. Ben Ammi, our spiritual leader, passionately announcing that we would postpone our journey, asked “Where is our Passover?”

Fast forward to the present. On the eve of Yom Kippur — the highest Holy Day of the Hebraic calendar, a day set aside for reconciliation among brethren — the 51 community members received word of the Ministry of Interior’s denial of their appeals. “Where is our Yom Kippur?” we asked.

We’ve been here before.

Stepping away from the emotion of it all, why can’t those in the Ministry of Interior realize that our presence here is rather extraordinary. The founders of our community were not “misfits from the ghettos of America,” as was once a common refrain in the media. The inference, of course, was that in America, we were unable to fit in and had seized upon an opportunity to claim a connection to Israel.

Nothing is further from the truth. Our pioneers left America primarily because they refused to deny their Hebrew heritage. They came to Israel leaving behind what draws most people to America nowadays — jobs, homes and other material pursuits.

The only reason intelligent people endure ill-treatment, resist the urge to become angry and embittered and ultimately creatively contribute to the society that rejected them is that they have a higher motivation. We came answering the prophetic call of Zion, which tempered our resolve to stay in spite of the harsh treatment we encountered over the years. We are also thankful for the many kindred spirits in the general Israeli population who welcomed and supported us, souls who empathize and even identify with our struggle.

Through our pain, we recognize that many of the innovative lifestyle practices that are the hallmark of the community — veganism, preventive health, organic agriculture, education and a vibrant communal culture — evolved as a consequence of the hardships that we endured. As in the words of Joseph concerning the ordeal orchestrated by his brethren, “Ye thought evil against me; but God meant it unto good.” With veganism and other progressive aspects of our lifestyle taking hold in Israel in recent years, one might ask “What other good things are you doing in Dimona?” The annual stream of thousands of Israeli and international visitors attests to the question actually being asked, and the answer sought. But progress and mutual respect needn’t come so hard.

“The biggest challenge to Jewish society in Israel is to believe that the common ground that exists within the Jewish people can overcome our differences,” Rabbi David Stav of the religious-Zionist Tzohar rabbinical association, was quoted in the Jerusalem Post this year as saying, as Yom Kippur approached. These “differences” owe to a plurality of “Judaisms” and “Hebrewisms” (both words that yet register in our spell checking software).

Recent years have seen an increasing awareness of ancient pre-Talmudic linkages and forms of Judaic belief among people of African ancestry, even if such ontologies remain subject to European criteria and are accompanied by condescension and marginalization. An Israeli anthropologist friend of mine, Malka Shabtay, related the comment of a colleague after sharing with him a chapter I authored a few years ago on this issue: “It’s challenging,” he simply told her.

The case I laid out, like our presence, indeed poses a challenge. But not an insurmountable one. Challenges frequently leave those who encounter and overcome them stronger. That being said, it would seem that Rabbi Stav and I are actually on the same page. We have a promising opportunity here to begin the journey toward real reconciliation, a journey that will only be as long and arduous as our preconceived notions and prejudices necessitate. Otherwise, calls for Jewish solidarity will ring hollow and yield only more frustration and fragmentation.

“The first task in the government and the opposition,” says Rabbi Stav, “is to make mighty efforts to create a unifying dialogue among the different groups of the Jewish people.” I will presume his reference to “Jewish people” includes those who identify with Israel, though they may express their Judaism differently.

The Israeli Ministry of Diaspora Affairs ostensibly made such an effort in convening an inquiry into “worldwide communities with affinity to the Jewish people.” Although we find the term “affinity” to be condescending and insulting, let’s call it a start. In his testimony before the inquiry (as recorded in their official report), Rabbi Andrew Sacks, director of the Masorti (Conservative) Movement’s Rabbinical Assembly, noted that “the authorities, and especially the Ministry of the Interior contain built-in hostility towards those seeking affinity,” that the process “contains clear racial elements” and recommended that “(t)hese people should be removed from their post.”

Now that’s a thought. Would Interior Ministry personnel act with such impunity — regularly “misplacing” applications and files in a seemingly purposeful attempt to discourage — if they felt their jobs were in jeopardy?

The early 20th Century Zionist leader Ze’ev Jabotinsky had some thorny differences with other Jewish leaders, but he is widely revered as an Israeli pioneer. Labeled a “revisionist” for his insistence that the relationship between the Zionist movement and Britain be revised, he argued for unrestricted aliyah. Perhaps Israel’s immigration policies vis-à-vis African Hebrews are also due a revision.

We realize that no country in the modern world can afford entirely open borders. But what cannot be disputed is that the State of Israel’s very existence is owed to those who defied British authority based upon a spiritual imperative.

Herein lies an opportunity for a bold initiative: Let’s sit down and talk. How’s that for a novel idea? Maybe the first step, as Rabbi Sacks suggests, is to remove those prejudiced elements from the Ministry of Interior to jumpstart a reevaluation and fresh dialogue. “We will argue and fight” no doubt, as Rabbi Stav said, “but we will fight like brothers and family fight.”

The challenge of the 51 souls facing deportation in the Hebrew Israelite community is not something Israel has not resolved for other communities, such as the granting of nearly 5,000 permanent resident visas for Filipino immigrant workers and their children in 2006 and 2010. Despite their presence owing primarily to economic motivations, they were recipients of Israel’s humanitarian largesse. Surely, we who share such close spiritual, cultural and ideological underpinnings are worthy of similar compassion.

None of this is to single out Israel, for racism is a global phenomenon that continues to plague even America, the self-proclaimed champion of human rights. But we have been treated unjustly in too many instances by the Ministry of Interior while other government offices looked the other way. I reiterate that to have remained here under such circumstances is a testament to our faith in Israel’s biblical/prophetic imperative: that from Jerusalem such a model society is destined. Sadly, all of this hyperbolic enmity and hatred, generated by a few, has distracted from our ongoing contributions toward that objective.

Israel’s policies in today’s volatile world are often difficult to explain, but we have, whether defending Israel’s hotly-contested African Union observer status or rebuffing the nation’s label as a racist pariah state. This is especially true in many of the circles we frequent. (Imagine being queried about our 100% IDF enlistment rate by a vehemently pro-Palestinian audience!) But they can be explained. Such explanations are inherently more plausible coming from us, but not if our own experience of mistreatment lends itself to distrust and ill-favor. Israel needs all the help it can muster in this arena. Why not help us to help you?

In his final public address on the eve of his assassination, Martin Luther King issued a scathing indictment of America’s soiled legacy of racial oppression. King called for a “human rights revolution” to assuage the “long years of hurt and neglect” of those of lesser privilege and darker hue. Should that not happen, he warned, “the whole world is doomed.” How much more if such “hurt and neglect” is not worked out here in the very “Promised Land” he articulated at the end of that same momentous discourse?

Rabbi Stav lamented “this feeling of enmity and hate” between the various elements of Israeli society that “threaten to destroy every good thing we have”. Noble words, no doubt. But let’s be sure to apply them to the Hebrew Israelites.

We are confident that we shall be vindicated, because our hopes rest not just upon any political settlement or legal ruling which might mark the end of these proceedings, but upon the righteousness of our cause and the Creator’s will. And, of course, because we’ve been here before.

For African Hebrew Israelites, threats of deportation are dehumanizing — and déjà vu