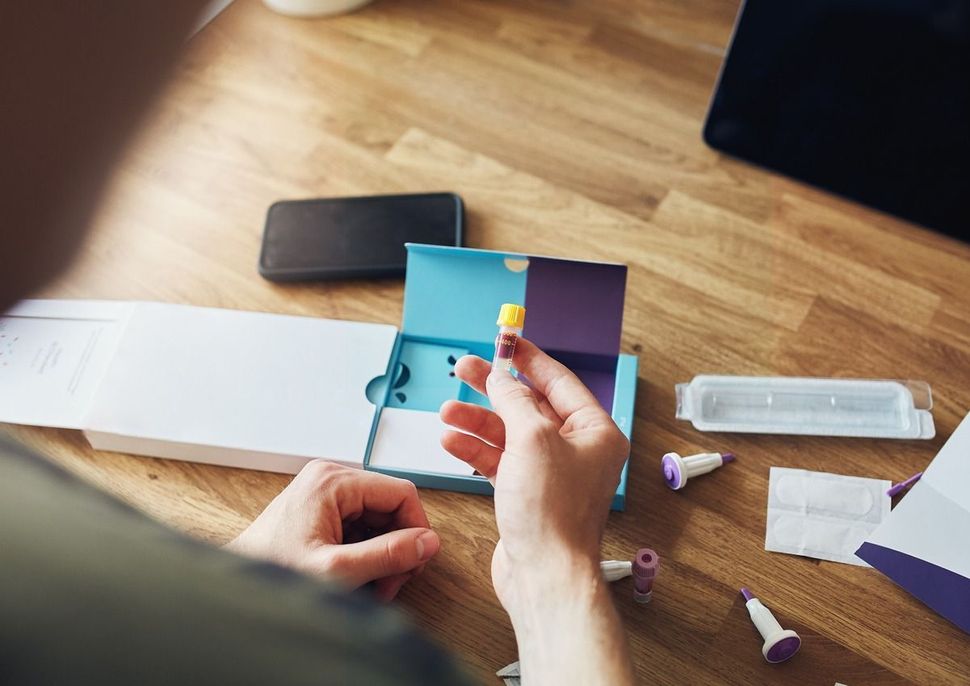 A man holds components of a home testing kit on top of a wooden table. Courtesy of iStock

It should have been a relaxing summer lunch with my maternal first cousins and their spouses, but instead, my mind was racing. I needed to ask a question that had been on my mind for months and I could not wait any longer. Pushing aside my plate, I spoke.

“I took an Ancestry DNA test and received some confusing results. It showed I am closely related to numerous people I’ve never heard of and only distantly related to a first cousin on my father’s side. Do any of you know anything that could help explain this?”

My cousin Joanie’s husband immediately answered. “Everyone in the family knows you were conceived by artificial insemination,” he said. “We thought you knew.”

Dumbstruck, I gaped. “What did you say?” my wife, Melody, blurted.

My cousin’s husband repeated his statement. At the age of 73, this stunning revelation would upend everything I thought I knew about my family history — and propel me toward another personal discovery I never could have imagined.

My journey started in 2017 when my wife gave me a mail-in DNA test as a Hanukkah gift. I completed the test but only glanced at the results. After all, I thought I knew everything I needed to know about my family. What else could I learn from my DNA?

Three years later, with a wealth of time on my hands during the pandemic lockdown of 2020, I decided to take a closer look at my DNA test results: 100% Ashkenazi Jewish. No surprise there. But when I examined the names of the people I shared significant amounts of DNA with, I didn’t recognize any of them. Further study revealed that my first cousin Sheila, the daughter of my father’s sister, was shown as an eighth cousin on my DNA match list.

I didn’t understand any of this. I sent away for another Ancestry DNA test kit, thinking the results were wrong. A couple of months later, the second test results arrived: they were identical to the first.

My wife and I began researching my close but unrecognized DNA matches to figure out how I might be related to them. Through Ancestry.com, I emailed six of the people identified as my first or second cousins on my DNA match list; only one responded. He had done extensive research into his own family which he generously shared, but we both remained puzzled by our newfound DNA connection. I combed the Ancestry databases for historic details about my other DNA matches and looked online for recent information about them. We learned a lot about the individuals and their families going back several generations, but nothing explained how I was related to these strangers.

Six months in, the answer seemed no closer than when I had started. Frustrated and losing hope, I reached out to a genealogist friend, Donna Bouley Goldstein, for help. She suggested I send away for a certified copy of my New York City birth certificate, as well as take a DNA test through a different provider, 23andMe, to see if I could find more DNA matches in their database.

In the interim, Donna began putting together lists of my known DNA matches from my mother’s family, father’s family and those who were related to neither of my parents. Donna’s careful analysis confirmed what I had been beginning to suspect: I was not my father’s biological son.

My mind was reeling. Born to working-class parents in the Bronx in the late 1940s, I knew of nothing unusual in my background. We had a large, extended family and frequently shared Jewish holidays and family celebrations with them. No one had mentioned anything about my being the product of anything other than a traditional conception and birth. I could not fathom how this genetic inconsistency could have occurred. With my parents, aunts and uncles, and only brother deceased, there was no one left to ask.

Adding to the mystery was a recently published Mother Jones article about a group of 19 strangers who discovered through home DNA testing that they were half-siblings. All of the half-siblings had been born in the Bronx in the 1940s and ‘50s, all had been fathered by the same sperm donor and all had been delivered by the same group of obstetricians. I, too, was born in the Bronx in the 1940s and had been conceived by artificial insemination. I wondered if I could be part of this fast-growing group.

Donna suggested that I reach out to some of my first cousins on my mother’s side to ask if they would take the Ancestry DNA test to confirm I was related to them. “Prepare yourself for a possible surprise if you do this,” I cautioned my cousins. “I will have my DNA tested with my eyes wide-open,” one cousin replied.

When my cousins’ results came back, they proved we were indeed first cousins as we had believed; I was still my mother’s son, not a total stranger in my skin as I had feared. But I still could not identify my biological father.

The answer came on Sept. 25, 2021, in a plain white envelope containing a certified copy of my original birth certificate issued by the New York City Department of Health and Mental Hygiene, and signed by the doctor who delivered me. Donna, Melody and I began scouring the Internet for information about my mother’s obstetrician to see if he was connected to the group of the Bronx doctors who had delivered the 19 half-siblings.

What we found was even more shocking: many of the names in the obstetrician’s family tree were identical to the names of my unexplained DNA matches.

My mother’s obstetrician was my biological father.

A few days after learning who my biological father was, the 23AndMe DNA test results arrived with more astonishing news: I had two half brothers, both delivered and conceived through artificial insemination by the same obstetrician as I. One half brother is a doctor — like our biological father and me.

During my many months of seeking to understand my mysterious DNA matches, I learned from a relative that my parents had had difficulty conceiving a child. I am guessing they sought help from a physician who was familiar with the cutting-edge work in infertility being performed by some of his colleagues on the staff of the hospital where I was born. I learned from Donna that the prevailing wisdom of the 1940s and ‘50s was for parents to absolutely not tell children born by artificial insemination, for fear of causing permanent psychological damage.

I have thought deeply about the possible motivation for my mother’s obstetrician performing artificial insemination. Could it have been for money? The excitement of being involved in a state-of-the-art medical procedure? In post-WWII New York City, could it have been to increase the population of world Jewry? I choose to believe it was empathy for a childless couple who wanted to start a family.

I will never know what my parents knew about the identity of their sperm donor. One can argue that it would have been more ethically straightforward to use sperm from another man, and why my biological father did not choose that option remains unclear. What is clear is that I feel indebted to him for what he did to bring me into this world. Without his efforts to help an infertile couple conceive, I would not have been born and my two children and five grandchildren would not exist.

Equally important is that I remain deeply grateful to my mother and father for the love we shared and the many sacrifices they made on my behalf. My father will always be my father and my family will always be my family, regardless of how much DNA we did or did not share.

Dr. Jay M. Ritt, MD, is a retired physician in Massachusetts. He continues to seek answers to the many remaining questions about his genealogy, including those regarding his genetic relationship to his beloved late younger brother.