The Beijing Olympics looks a lot like Nazi Germany’s

For Chinese leader Xi Jinping, the Olympics represent an opportunity to turn the world’s attention away from the Uyghur genocide. The IOC and Chinese flag are seen flying next to each other during the Opening Ceremony of the Beijing 2022 Winter Olympics at the Beijing National Stadium on February 04, 2022 in Beijing, China. Photo by Elsa/Getty Images

The parade of Olympic athletes in their national colors, the international diplomatic corps looking on approvingly, the blaring of triumphal music, the children singing and dancing, the iconic torch-lighting ceremony — and the genocidal dictator presiding over it all: was it 2022 in Beijing, or 1936 in Berlin? Sometimes, it was hard to tell.

Countries that host the Olympic Games derive an array of financial benefits, from tourism dollars to corporate sponsorships. Regimes that are perpetrating human rights violations enjoy an even more important benefit: an opportunity to gain international legitimacy and whitewash their abuses.

For Adolf Hitler in 1936, The Games were a chance to make the Nazi regime seem reasonable and distract from his oppression of German Jews. For Chinese leader Xi Jinping, the Olympics represent an opportunity to turn the world’s attention away from what the United States government and human rights groups have said is his genocidal persecution of China’s largely-Muslim Uyghur minority.

Then and now, the international community has largely gone along with the deadly charade.

No American officials were present at the opening ceremony, in accordance with the Biden administration’s diplomatic boycott of what critics have dubbed “the genocide games.” Only 10 other countries joined the U.S. in that very limited protest, keeping their diplomats home but letting their athletes participate. No Muslim-majority countries joined the diplomatic boycott, despite the genocide of their fellow-Muslims. Nor, sadly, did Israel.

The representatives of the 84 fully-participating countries will be carefully shielded from any evidence of Chinese human rights violations. In advance of The Games, according to the Washington Post, the Beijing government has even closed some of the notorious “re-education centers” where an estimated one million Ugyhurs have been interned.

Hitler employed a similar Potemkin strategy in the weeks preceding the 1936 Berlin Olympics. The antisemitic newspaper “Der Sturmer” was briefly removed from newsstands and “Jews Not Wanted” signs that had been posted along major thoroughfares were taken away.

Once The Games were over, the signs and the newspapers returned. The Chinese reeducation centers will no doubt reopen, too.

The similarities don’t end there: China invited skier Dinigeer Yilamujiang, an ethnic Uyghur who will be competing in The Games, to take part in the torch-lighting ceremony. NBC announcer Savannah Guthrie, who co-narrated the opening, called the choice of Yilamujiang “stunning.” 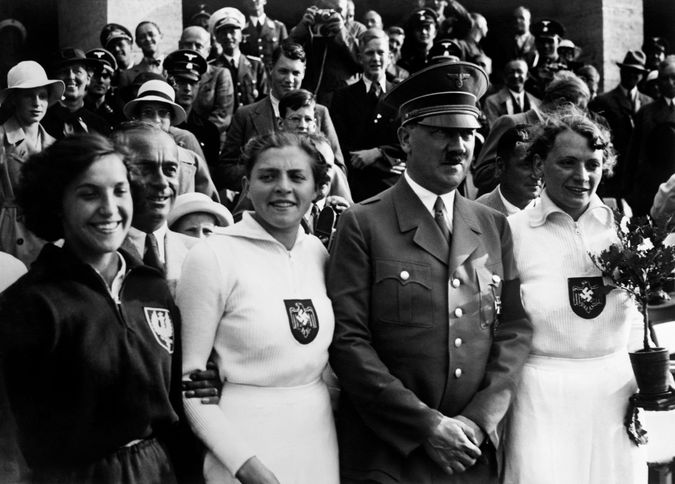 Hitler did something very similar. During the months preceding the Berlin games, critics pointed out that Jewish athletes were being systematically excluded from the German team. The Nazi leader sought to deflect the critics by signing up a token fencer who had a Jewish father, Helene Mayer. 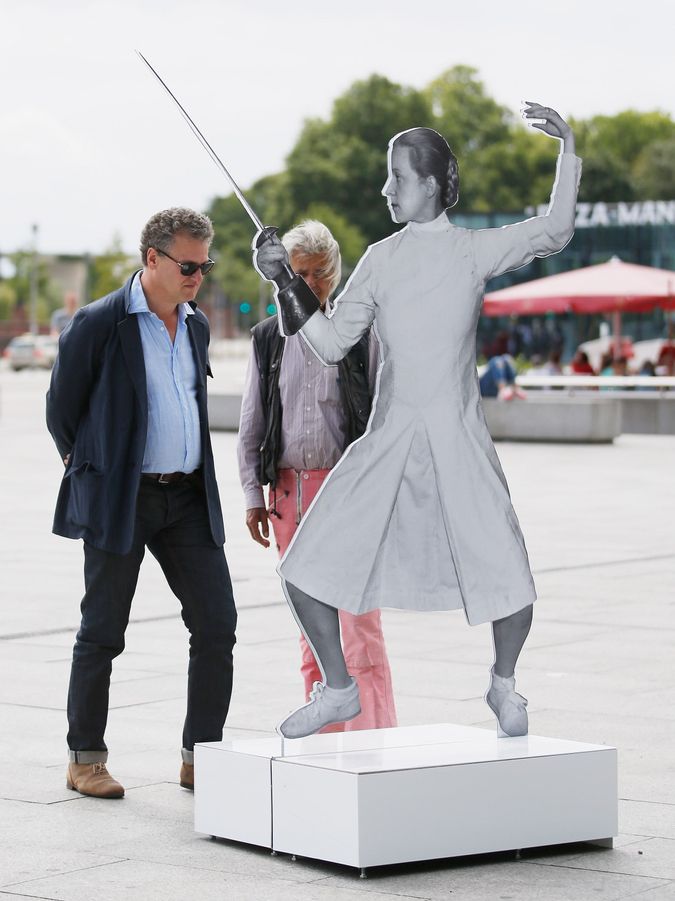 The life-sized sculpture of the Jewish athlete Helene Mayer is pictured during the exhibition opening ‘Between Success And Persecution’ at Washingtonplatz on July 23, 2015 in Berlin, Germany. By Boris Streubel / Getty Images

Mayer later explained that she gave the Nazi salute from the Olympics podium because her family members were still in Germany, some of them in concentration camps. One can imagine that Yilamujiang may well be laboring similar pressures.

Guthrie and the three other pundits who joined for NBC’s coverage of the opening ceremony made a few brief mentions of China’s human rights violations, although their words sometimes left much to be desired.

Commentator Andy Browne, of the Bloomberg New Economy Forum, made it sound as if the persecution of the Ugyhurs is a matter of dispute. He said — three times in the space of a few seconds — that the foreign descriptions of Chinese persecution are “allegations” which the Chinese government “strongly denies.”

Worse, he said that what they are alleging is that China is committing “a form of cultural genocide.” But there’s nothing “cultural” about the well-documented crimes against humanity China is committing, including forced sterilization, torture and internment of Uyghurs.

Prior to the opening of the Beijing Olympics, human rights activists urged athletes to boycott The Games. While some boycotted the ceremony, none are forgoing The Games completely.

Not many did in 1936, either, but at least there were a few whose conscience did not allow them to take part in Games hosted by a regime that was engaged in persecution.

The sports world was shocked by the Blackbirds’ decision. A prominent sports columnist, Frank Eck, chastised them for causing “ill feelings” by bringing the German Jewish issue into the discussion.

Things have not changed much since then. Boston Celtics center Ends Kanter Freedom has been a rare outspoken voice against Chinese oppression, but the NBA itself has not been as brave. 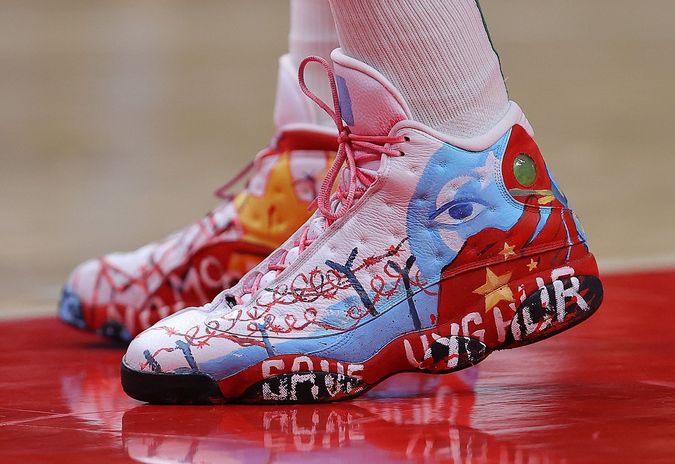 A view of the shoes worn by Enes Kanter #13 of the Boston Celtics against the Atlanta Hawks during the first half at State Farm Arena on November 17, 2021 in Atlanta, Georgia. By Kevin C. Cox/Getty Images

Those looking for parallels between 1936 and 2022 don’t have far to look. At the opening ceremony, troupes of choreographed Chinese children holding aloft cardboard cut-out doves, reminiscent of the 3,000 doves released at the Berlin opening as symbols of peace. Militaristic host regimes always want to be thought of as peaceful, right up until the moment they launch their next war. Then there was the stiff-legged, high-kicking manner in which a group of Chinese soldiers marched during the ceremony. In 1936, it was not only the soldiers of the host regime who did that, but also the athletes from Bulgaria, who at the opening ceremony “drew down handsome applause by flattering German sympathies” by goose-stepping as they passed the platform at which Hitler was seated, the New York Times reported. Five years later, the Bulgarians flattered him further by joining the Axis. More significant, however, is the question of whether international responses to the Beijing Olympics will parallel those of 1936. 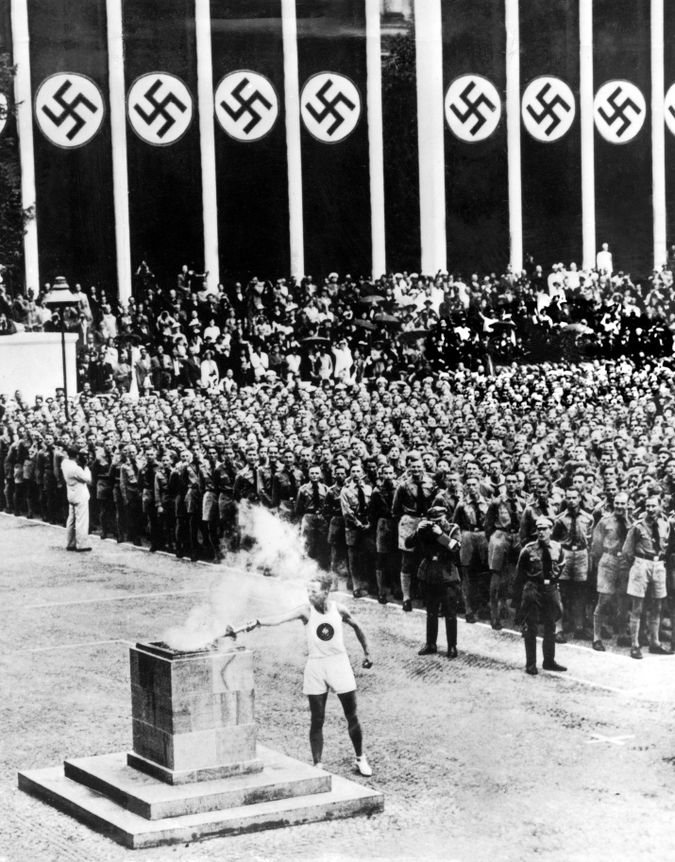 The torch, which had been lit by the sun’s rays on Mount Olympus and carried 1.800 miles by 3,000 runners through several countries, is placed by a young man in the Lustgarten during the opening ceremonies of the XI Olympic Games on August 1, 936 in Berlin, Germany. By Getty Images

The American news media’s generally positive coverage of the Berlin games vindicated Hitler’s hope that he could use The Games to soften Nazi Germany’s image abroad. The New York Times praised the German government for its “flawless hospitality.”

A Los Angeles Times correspondent wrote that “Zeus, in his golden days, never witnessed a show as grand as this.” An editorial in that newspaper even predicted that the “spirit of the Olympiads” would “save the world from another purge of blood.”

Even President Franklin D. Roosevelt was taken by the spectacle. He told Rabbi Stephen S. Wise how impressed he was to learn from two tourists who attended The Games “that the synagogues are crowded and apparently there is nothing very wrong in the situation [of Germany’s Jews] at present.”

Will the international community once again enjoy the athletic spectacle and turn away from the human rights crisis unfolding as The Games begin? Was the co-owner of the NBA’s Golden State Warriors right when he recently said that “nobody cares about the Uyghurs”?

The answers will soon become evident.

The Beijing Olympics looks a lot like Nazi Germany’s