Whether we allow the genocide to continue is the moral test of our generation. This picture taken on September 18, 2014 shows a truck carries ores from a quarry in the outskirts of Urumqi, farwest China’s Xinjiang region, where millions of Uyghur live. Photo by GOH CHAI HIN/AFP via Getty Images

Through constant surveillance, torture, sterilization, forced labor, “reeducation” and the destruction of thousands of mosques and holy sites, the Chinese government is attempting to eradicate a thousands year-old minority. More than 1 million Uyghurs have been sent to internment camps since 2017; millions more face systematic persecution.

Night raids are common. Once handcuffed, hooded and hauled into a station, police officers beat the Uyghurs and demand they “confess” to trumped up charges, a former Chinese detective in exile told CNN, “until they kneel on the floor crying.” Many women are sterilized against their will. One woman, after enduring the humiliation of being stripped naked and urinated on by guards, tried to kill herself — there was no rope, so all night, she gnawed on her own wrists.

Historians and politicians from across the ideological spectrum have been sounding the alarm about the Uyghur genocide for years. Whether we allow it to continue is the moral test of our generation.

We are failing that test. 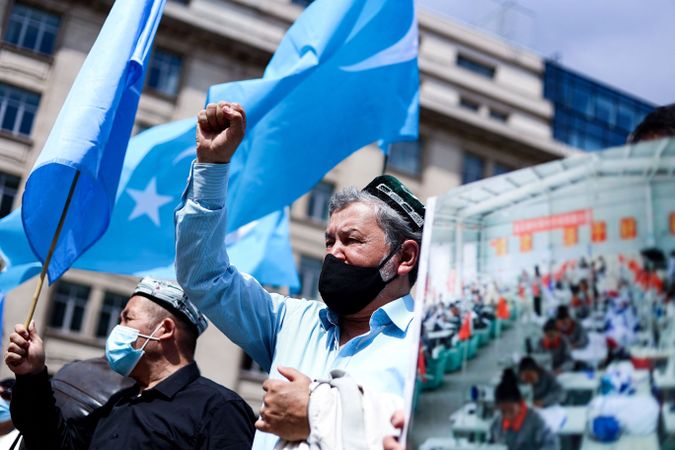 Demonstrators from the Uyghur Community gesture as they take part in a protest near the Belgium parliament in Brussels, the day Belgian MPs are due to vote a resolution denouncing ‘serious risk of genocide’ against China’s Uyghurs on July 8, 2021. Image by KENZO TRIBOUILLARD/AFP via Getty Images

“Now, before everyone’s eyes, scores of people are perishing in misery, millions at bloody graves, and in everyone’s ears are the sounds of wailing,” Abraham Cahan, the founding editor of the Forward, wrote in an editorial published on Sept. 10, 1939.

“Let’s pay our debts and get clear on who is who and what is what,” Cahan said. “And let us always remember it so that our children’s children can retell it.”

The situations are not the same. The Nazi regime systematically murdered 11 million people, including 6 million Jews. The Uyghur concentration camps are not death camps like the ones where many of our ancestors were systematically extinguished. I understand that comparisons to the Holocaust can often feel dangerous — nothing can compare to the most horrific genocide of modern history. And yet, the parallels are clear.

Holocaust experts were among the first to compare what the CCP is doing to the Uyghurs and what the Nazis did to the Jews of Eastern Europe. That it can be characterized as a genocide is one the few things that top diplomats for Presidents Trump and Biden agree on.

Tens of thousands of mosques, shrines, sacred pilgrimage sites and graveyards have been systematically destroyed — reminiscent of Kristallnacht. Like the Jews locked in the Warsaw Ghetto in 1940, most Uyghurs have no hope of ever leaving China; the families of the lucky few who escape Xinjang are often imprisoned, tortured or killed.

Posessing a Quran or anything related to Islam — or even a scrap of paper in the Uyghur or Kazakh language — can get you sent to the camps; Islamic crescents and pictures of mosques are banned, replaced with Chinese flags and pictures of President Xi Jinping. Loyalists of the Chinese Communist Party are sent to live with Uyghur families and watch their every move.

The Uyghurs are a tiny people — just like us Jews. There are an estimated 14 million Uyghurs in the world today, and about 15 million Jews worldwide — approximately the same number of Jews as there were before the Holocaust.

Today, as in the 1930s, accurate information about the extent of the atrocities is hard to obtain. Journalists and human-rights organizations generally cannot get inside Xinjiang, and rely instead on the rare few Uyghurs who manage to escape — and risk their families’ lives by speaking about the horrors they witnessed.

Throughout the 1930s and 40s, the Forward and other Jewish news outlets reported the daily horrors, often from the ground. Even when others refused to acknowledge the significance of what was unfolding, these Jewish journalists — my professional predecessors — risked their lives reporting in a region actively cleansing itself of its Jews.

The New York Times, likely tired of paying to hear about a constant drip of “anti-Jewish excesses,” as the paper of record often described Nazi crimes against humanity, dropped its subscription to the Jewish Telegraphic Agency in 1937, and the Associated Press soon followed suit. News of the Holocaust was quickly relegated to the back pages of most American newspapers, if mentioned at all.

“For the English-language press, what was happening to the Jews was a sidebar, a story that was ancillary to the main news — namely, the progress of the war,” the historian Deborah E. Lipstadt wrote in her introduction to a chapter on the Holocaust in the Forward’s “A Living Lens.”

But throughout the Holocaust, “the Jewish press continually admonished American Jewry for failing to adopt a more aggressive response,” another historian, Alex Grobman, once wrote. Though details were sometimes hard to come by, and much of the coverage was in Yiddish, everyone knew something terrible was happening, if only they bothered to look.

Hitler saw the Jews as an obstacle to world domination that had to be eradicated. Today, China sees Xinjiang — an area rich in natural resources — as vital to achieving its economic goals and the Uyghurs as an inconvenient obstacle to progress.

Today, we don’t have a language barrier to excuse inaction. Information is constantly at our fingertips; a Google search for “Uyghur genocide” turns up 4 million results. We don’t lack basic facts; we lack empathy.

It’s a nonstory to write that something isn’t happening. So instead, I’m writing that it must. 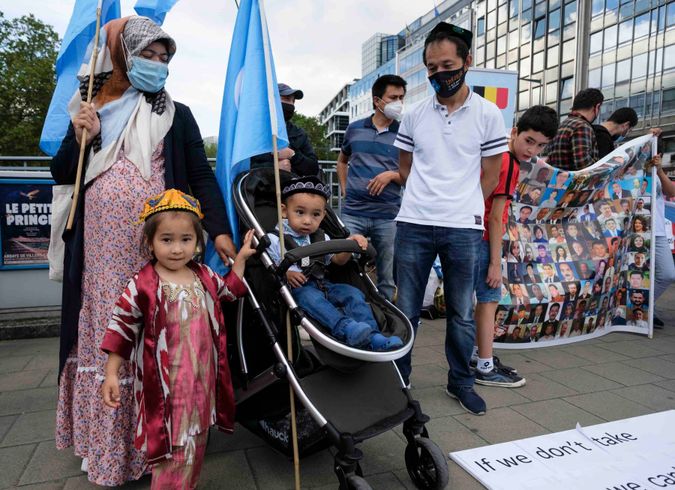 BRUSSELS, BELGIUM - JULY 8: Uyghurs opposants demonstrate near the Bank of China on July 8, 2021 in Brussels, Belgium. By Thierry Monasse/Getty Images

The first test of our moral fiber will occur in just a month: the 2022 Winter Olympics in Beijing. Following growing international pressure, including this essay in the Forward, the Biden administration is withholding U.S. diplomatic participation — an important symbolic move — though allowing athletes to take part.

It is not enough.

In 1936, the Nazis used the Olympics as a massive propoganda opportunity. There were protests — and protest games, which the Forward covered — but the Nazi regime successfully “exploited the Games to bedazzle many foreign spectators and journalists with an image of a peaceful, tolerant Germany,” as the U.S. Holocaust Memorial Museum’s website puts it.

We cannot afford the Chinese regime the same opportunity. Don’t watch the 2022 Games. Publicly call for your favorite athletes and teams to boycott them, your local radio and television stations not to broadcast the action.

The 1936 Summer Olympics is commonly referred to as the Nazi Olympics. Let’s call the 2022 Winter Games what they are: the Uyghur Genocide Olympics.

There’s only so much cultural boycotts and individual pressure can do. Economic pressure from the world’s superpower is another story: this month, following near-unanimous consent in both chambers of Congress, the United States banned the import of products produced by Uyghur slave labor — a vital move.

The U.S., Canada, the European Union and the United Kingdom have previously imposed coordinated sanctions against several officials and entities connected to the ongoing Uyghur genocide. But Muslim-majority states — including our allies in the Gulf Cooperation Council — have been “conspicuously silent” on the Uyghur genocide, and they must be pressured to crank up the heat.

Washington, using its full range of financial tools, should make life as difficult as possible for anyone with ties to the Uyghur genocide — especially if they step foot on American soil.

The next step proposed by Amnesty International is to “demand the immediate release of everyone arbitrarily detained” and to demand that Uyghurs be allowed to freely travel and practice their religion. But who can we demand this from? 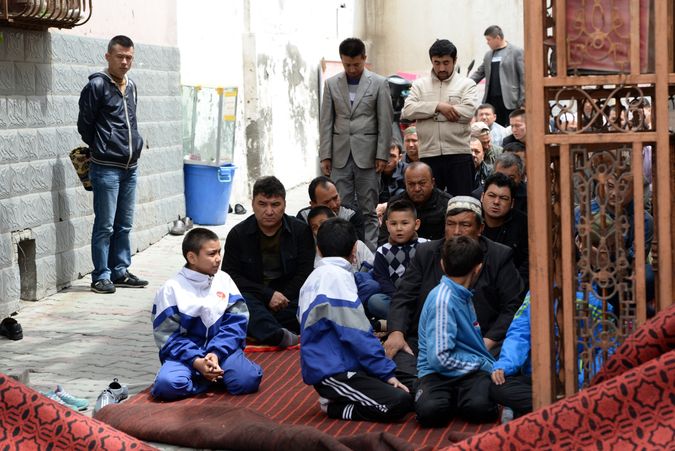 Children join the adults at a mosque for Friday prayers in Urumqi, the capital of farwest China’s Muslim Uyghur homeland of Xinjiang, on May 23, 2014. By GOH CHAI HIN/AFP via Getty Images

Nury Turkel, a Uyghur activist and current Vice Chair of the U.S. Commission on International Religious Freedom, has myriad suggestions. The United Nations could establish an independent mechanism to investigate human rights abuses in Xinjiang — though China, which absurdly sits on the U.N. Human Rights Council, has so far stonewalled U.N. requests for access to the area. Indeed, the body has recently been more likely to share sensitive information with the Chinese Communist Party than counter its crimes.

The Biden Administration could demand that China release family members of Uyghurs who are American citizens, or those whose relatives serve or have served the U.S. government or its contractors. The U.S. should also fund rehabilitation centers for Uyghurs who have escaped and now suffer from severe trauma.

And, to counteract China’s efforts to erase the Uyghur way of life, the U.S. should fund cultural institutions in the Uyghur Diaspora.

There’s also an easy lift for us as individuals: Listen to survivors — and remember well their testimonies.

“We are showing you all this now so that today and in the future, Jewish readers will remember, along with the rest of the world, that all peoples are this very day divided,” Cahan thundered in that 1939 editorial. “On one side are the free democratic countries and on the other side are the enslaved peoples under the bloody heel of dictators.”

As he decried Hitler and Stalin’s “enterprise of setting the world on fire,” he also implored us to “to remember each hour, each minute, the great accountability of these days.”

His words echo in my ears today. We are the inheritors of Cahan’s righteous fire, of the free world’s holy indignation when it finally chose to act.

We have the power to help put out today’s fires ourselves. The Uyghurs cannot wait.

Correction: An earlier version of this article incorrectly stated that Abraham Cahan’s 1939 editorial was written before Kristallnacht. We regret the error.