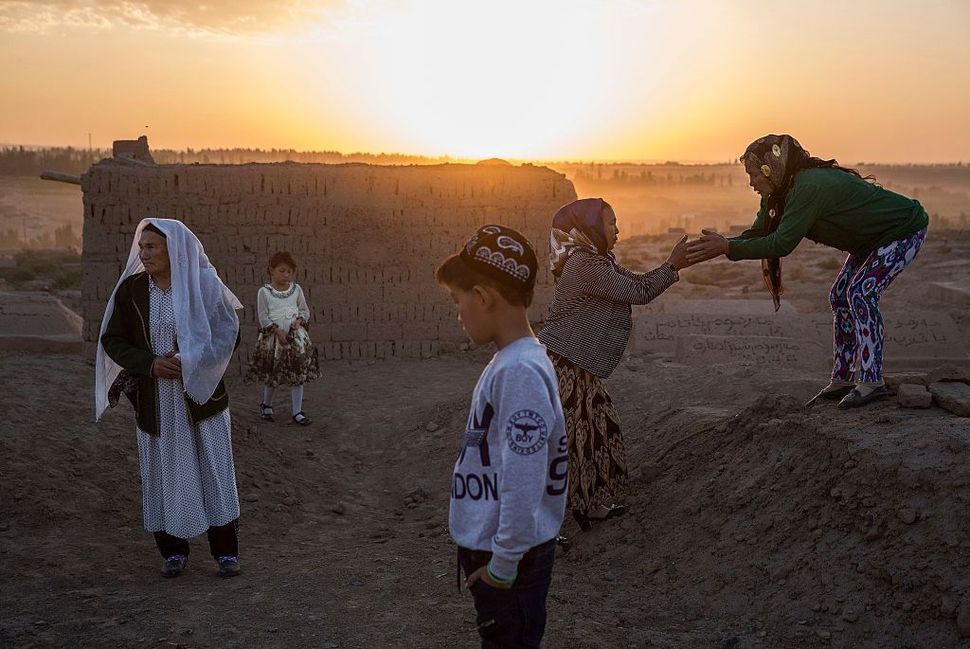 TURPAN, CHINA – SEPTEMBER 12: (CHINA OUT) Uyghur women greet each other as they arrive to pray at the graves of loved ones at a local shrine and cemetery on the morning of the Corban Festival on September 12, 2016 in Turpan County, in the far western Xinjiang province, China. The Corban festival, known to Muslims worldwide as Eid al-Adha or ‘feast of the sacrifice’, is celebrated by ethnic Uyghurs across Xinjiang, the far-western region of China bordering Central Asia that is home to roughly half of the country’s 23 million Muslims. The festival, considered the most important of the year, involves religious rites and visits to the graves of relatives, as well as sharing meals with family. Although Islam is a ‘recognized’ religion in the constitution of officially atheist China, ethnic Uyghurs are subjected to restrictions on religious and cultural practices that are imposed by China’s Communist Party. Ethnic tensions have fueled violence that Chinese authorities point to as justification for the restrictions. (Photo by Kevin Frayer/Getty Images) Image by Getty Images

When a powerful nation interns at least a million Muslims in concentration camps in an effort to eradicate their culture and religion, is that a Jewish issue? And if so, what can and should be done?

Because that is happening today.

Today, the Chinese government is holding an estimated one to three million Muslim Uighurs and other Muslim minority groups in what even the Trump administration, not known for championing human rights, is calling “concentration camps.”

Some of the sprawling facilities in the northwestern Xinjiang region are ringed with razor wire and watchtowers, according to Reuters and other reports. Former detainees have described being tortured during interrogation, living in crowded cells and being subject to a brutal daily regime of party indoctrination that drove some people to suicide. Journalists have noted that the Chinese government has ordered police batons and electric cattle prods for the camps.

The Chinese, who consider the Uighurs a security threat, claim that the facilities are vocational skills education centers.

That’s about as believable as the Nazis proclaiming on the doorpost of Auschwitz that work will set you free.

Randall Schriver, an assistant secretary of defense, defended the Nazi analogy at a press briefing May 3, saying that it was justified “given what we understand to be the magnitude of the detention, at least a million but likely closer to 3 million citizens out of a population of about 10 million.”

My former colleague Sigal Samuel, who has written about this extensively for Vox, says that many scholars think use of the description “concentration camps” is appropriate — especially given the cattle prods — but they have avoided the term because they didn’t want the public to think they were exaggerating.

They’re not exaggerating. We cannot avoid this outrage any longer.

“We Jews vowed ‘Never Again’ and have an obligation, because of our Torah and our history, to prevent this cruel dehumanization and slaughter from happening again, to any of God’s children,” Rabbi Simkha Y. Weintraub, the rabbinic director of the Jewish Board in New York, told me in an email.

He already has experience mobilizing American Jews on behalf of Muslims in Asia as coordinator of JACOB: the Jewish Alliance for Concern Over Burma, which focuses on the plight of a million Rohingya Muslims who fled Burma (or, if you wish, Myanmar) to makeshift camps in neighboring Bangladesh. That group works closely with the Jewish Rohingya Justice Network, housed at the American Jewish World Service, which represents 19 Jewish organizations and all four major religious denominations.

Now, Weintraub tells me, he is intending to launch ESAU (Every Synagogue Advocating for the Uighurs), a network of synagogues starting in the Washington area which would pledge to educate their communities about what is happening to the Uighurs, advocate for legislation to pressure China to stop the genocide, and publicly advocate on the Uighur’s behalf.

Meantime, on the West Coast, Jewish World Watch, a genocide and mass atrocity awareness and prevention organization, is also making the Jewish link to this crisis.

“Our interest in the Uyghurs (an alternative spelling) lies in the common indicators of genocide that are already demonstrating themselves: the physical isolation (internment/ghettoization), the persecution (torture, deprivation), and the culture cleansing,” Ann Strimov Durbin, JWW’s director of advocacy and grant making, said in an email. “All these are ‘phases’ of genocide that have repeated themselves again and again in genocides the world over.”

JWW and other advocacy groups — including the Anti-Defamation League — are pushing Congressional action on the Uyghur Human Rights and Policy Act, which urges high level U.S. engagement on the issue, including publishing a list of the Chinese companies involved in the construction and operation of these camps.

At the same time, American Jewish Committee’s Jacob Blaustein Institute for the Advancement of Human Rights is working the halls of the United Nations, urging U.N. figures to speak out about these human rights abuses, says Felice Gaer, JBI’s director. Even though the U.S. formally withdrew from the U.N. Human Rights Council, she says that her group and others are still encouraging the Americans to participate in a review of China’s appalling human rights record.

Jewish organizations large and small are waking up to these atrocities, and discussion is mounting in Washington. It’s refreshing to see our community taking the burden of our history so seriously.

Jane Eisner is the Forward’s writer-at-large. Contact her at [email protected]