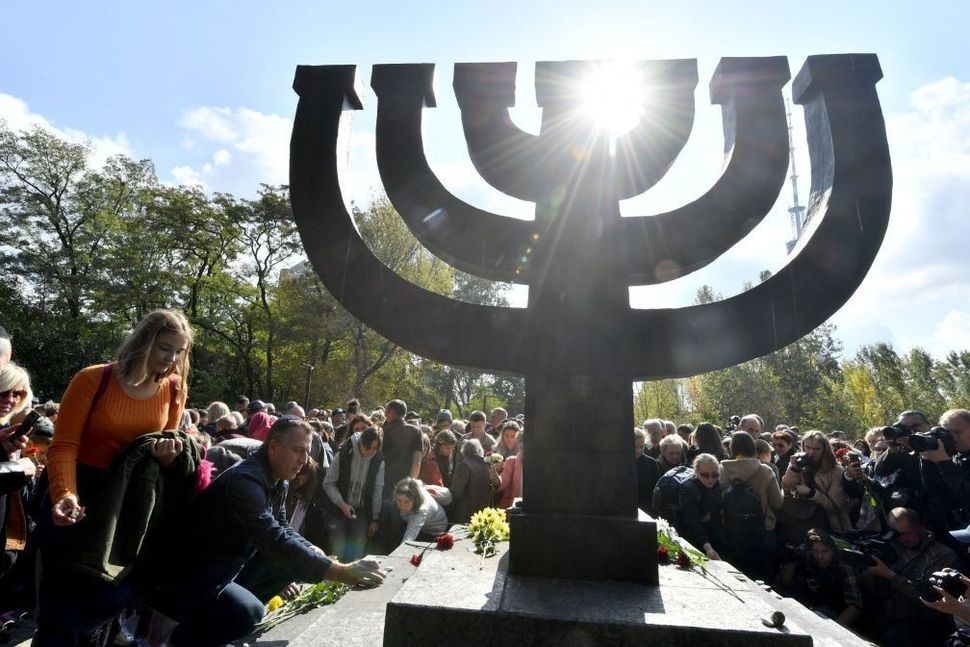 People lay symbolic stones and flowers at Minorah Monument at the Babyn Yar (Babi Yar) Holocaust Memorial in Kiev, on September 29, 2019, during a mourning ceremony marking the 78th anniversary of the beginning of mass execution of Jews in September 1941. By Sergei Supinsky/AFP via Getty Images

For over a decade, I lived down the street from a small urban park improbably named Babi Yar. It was located on the border of Brighton Beach, a community in Brooklyn primarily populated by Jewish members of the former Soviet Union since the 1920s, and Manhattan Beach at the southern tip of Brooklyn.

A small plaque at the entrance reminded me that the park was named in 1981, decades before a memorial would be built at the actual site of the massacre. I wondered how a city park with a playground could be a memorial for Babyn Yar, a site of mass murder where nearly 34,000 Jews were shot in a pit in central Kyiv in Sept. 1941. Were we supposed to remember the massacre when we brought our young children to play?

Just this week, Russian missiles, likely aiming at a television station, bombed and partially damaged the site of Babyn Yar. Ukrainian president Volodymyr Zelenskyy, a Jewish descendant of Holocaust survivors, expressed anger, tweeting: “To the world: what is the point of saying ‘never again’ for 80 years, if the world stays silent when a bomb drops on the same site of Babyn Yar? At least 5 killed. History is repeating.”

Russian Prime Minister Vladimir Putin justified his invasion of Ukraine, a sovereign country, by claiming “de-Nazification.” While Putin claims that his mission to de-Nazify Ukraine means removing the Nazi elements in the country, his de-Nazification is actually carried out by bombing the site of a Nazi atrocity, by trying to erase its memory.

Over 33,000 Jews were shot in two days at the site in Kyiv. Their corpses were in layers as one group was shot on top of the next. While Ukraine was part of the Soviet Union, the Jewish community was rarely able to properly commemorate the atrocity. Even when the massacre was openly acknowledged, emphasizing the Jewish specificity of those executed was strongly discouraged. The Soviets replaced the Nazis in Ukraine, but for both regimes, antisemitism was policy. Russian dissident poet Yevgeny Yevtushenko’s famous 1961 poem “Babiyy Yar” opened with the lines: “Over Babi Yar, there are no monuments.” Part of the memory of Babyn Yar, therefore, was that there was no memory.

Jewish memory, however, is a living memory. It is an active recollection that lives in prayer (Kaddish), in ritual (shiva), and in holidays that commemorate both our persecution and our triumph over the persecution. On Pesach, for example, we simultaneously remember what it was like to be enslaved by Egyptians and to be freed by eating matzah, at once poor man’s bread and the bread of freedom that can be baked quickly.

On Purim, we erase the evil Haman’s name by stamping it out with noisemakers when we hear it recited in the megillah. Rituals such as these simultaneously commemorate our persecution as well as our triumph over said persecution.

The Jewish people don’t need a site to remember the horror. While sites of memory such as memorials, museums and even small plaques in urban parks serve as witnesses, Jews have never solely depended on these sites to mourn or remember. Our memory is embedded in time and ritual — we eat matzah for seven days remembering that we too, were refugees fleeing Egypt; we shake our groggers to blot out Haman’s name.

While sites of persecution serve as witnesses, we are not dependent on them. Putin may try to erase Jewish memory but our memory is long, it is robust and it is ritualized. Until the invasion what could better serve as poetic justice than a Jewish president on the site of Nazi mass murder? (May God keep him safe.) That cycle of persecution, death, triumph and of rebirth is deeply and inherently Jewish. We live with both every day and within our collective memory lies our key to survival.

We are an ancient people and one of the reasons we have survived is that we remember. We carry the anger and the persecution of our ancestors, and we do not forget. We have not forgotten our period of enslavement, we have not forgotten an ancient Persian king who tried to annihilate us and we will not forget Babyn Yar. My family was not there, but everyone who was there was my family.

Shoshana Batya Greenwald is a speaker, writer, educator and design historian living in New Jersey. Her interests lie in the convergence of Jewish material culture, art, design and Orthodox life.