Iran is a Jewish issue. Why is the community silent? 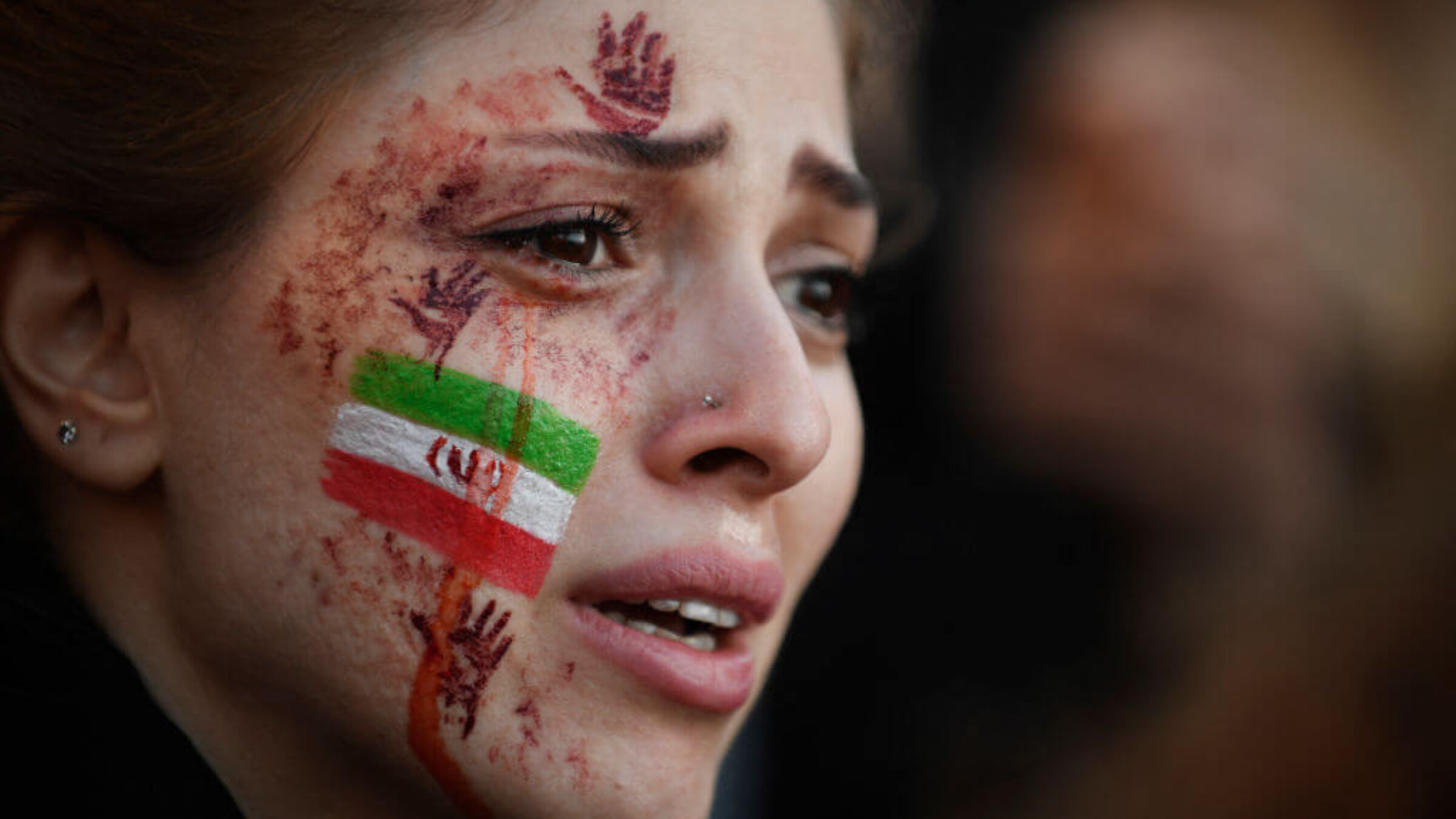 A demonstrator with an Iranian flag and red hands painted on her face attends a rally in support of Iranian protests in Paris on Oct. 9, 2022, following the death of Iranian woman Mahsa Amini. Photo by Julien de Rosa/AFP via Getty Images

At least 488 Iranians have been killed since the women-led protests began in September. Over 18,000 are reported to be arrested, and as of now, two have been executed, hung to death from construction cranes after being tortured into false confessions and sentenced in sham trials.

The world has not been completely unmoved to action by the shocking death of 22-year-old Kurdish-Iranian woman Mahsa Jina Amini for “improperly” wearing her hijab. Just this week the United Nations expelled Iran from its Commission on the Status of Women, in response to a grassroots movement. Yet as a queer Iranian-American Jew, I am discouraged by the silence among the American Jewish community, the absence of the Iranian protests from synagogue sermons and communal spaces.

The Iranian people are in a desperate fight for dignity and basic rights, and their slogan: “Zan, Zendegi, Azadi” (“Women, Life, Freedom”) has shaken the underpinnings of the ayatollahs’ brutal theocratic regime.

Where is the Jewish community’s support for the thousands of Iranians who are risking their lives daily, standing up to regime “security” forces that assault, rape, and murder peaceful protestors? Jews have lived in Iran since the 6th century B.C.E.; do American Jews truly not see Iran as a Jewish issue?

Like many Jewish Iranians, I feel a deep sense of connection to my parents’ homeland, one of the oldest Jewish diaspora communities in history. Jewish Iranian life has been rich and cultured, despite an extensive history of persecution, including the 1839 Allahdad pogrom — a mass forced conversion against the Jewish community in Mashhad — and the 1910 blood libel pogrom against Jews in Shiraz.

Though the Jews of Iran were legally emancipated in the revolution of 1906, it wasn’t until 1941, when Shah Mohammad Reza Pahlavi took the throne, that Iran’s Jewish minority began to prosper. By the 1970s, Iran was one of the most modern and Westernized countries in the Middle East, and the Jewish community was over 100,000 strong.

The head of the Jewish Association of Iran, Habib Elghanian, was executed at the onset of the 1979 Islamic revolution, sending a clear message to the Jewish community that they were not safe. Most left the country. My grandfather was smuggled out on donkey back through the mountains to Pakistan, where he suffered a stroke and remained sick for months. Separated, my mother’s family eventually reunited in Europe and then the United States, but the refugee experience left them traumatized. This is a common story for many Jewish Iranian families.

The danger to the Jews in Iran was reinforced in 1999, when the regime arbitrarily arrested 13 Jews, including a rabbi, two university professors, three teachers of private Hebrew schools, and a 16-year-old boy, and accused them of spying for Israel. As a recognized religious minority, Jews are permitted one symbolic member of the Majlis, Iran’s Parliament — as are Christians and Zoroastrians — but they suffer significant discrimination and have been conditioned to keep a low profile.

Today, about 10,000 Jews live in Iran, but life in modern Iran is challenging for minority populations, and for Jews in particular. They must be careful not to draw the ire of the Islamic Republic, thanks to its regime’s anti-Israel obsession and legally defined view of religious and ethnic minorities as inferior.

The Islamic Republic has arrested five Jewish citizens during the ongoing protests in the cities of Tehran and Shiraz. Only one has been released, with the others still being held; two are believed to be university students. The Jewish community of Iran has been placed in a difficult position and, in an act of self-preservation, has released a letter supporting the theocratic government and condemning the anti-government protests. At the same time, the community leadership has made the unprecedented decision to warn members against visiting synagogues and curtail religious services due to the ongoing unrest.

Iranian Jews in the United States have been freer to speak up, and many have united in support of those protesting for Iranian freedom, but we must constantly weigh our advocacy against the danger to our community in Iran.

The only request the people of Iran have made of us is to “be our voice.” Each of us can do this; we can and must have a part in this revolution by using our voices to speak out against the atrocities of this evil regime. Our biggest weapon is social media; utilize it, share posts, retweet, and use hashtags. Speak about it at Shabbat dinner and with your friends. Share the stories of the precious bright young souls who have given their lives fighting for freedom.

An Iran that profoundly changes its governing values, finally representing the much more modern and tolerant values of Iran’s people, would cease to be the greatest threat to regional stability. A stabilized and free Iran could pave the way to a whole new reality for peace in the Middle East.

I dream of visiting a free Iran one day, of reconnecting with the lands of my heritage without risking my life and freedom. Iran’s people are yearning to breathe free, and restore the rich Persian legacy of culture, trade, and statecraft that for millennia has contributed so much to the world. For these dreams to come true, the murderous regime of the ayatollahs has got to go. As a Jewish-Iranian, I urge our community to help make this dream a reality.

Matthew Nouriel is a nonbinary digital activist who advocates for LGBTQ+ rights and equality in the Iranian and Jewish communities. They’ve held leadership positions with JQ International, JDC Entwine, and Tel Aviv Institute, and currently work as a program coordinator at JIMENA – Jews Indigenous to the Middle East and North Africa. They are the recipient of the TrailBlazer Award at the JQ International Impact Awards.

Iran is a Jewish issue. Why is the community silent?