The Nazis didn’t care if you were an Orthodox Jew or an assimilated Jew or anything in between. This would seem to be a powerful argument against defining anti-Semitism based on how you define your Jewish identity.

Yet, in a recent op-ed, the Forward’s Opinion Editor Batya Ungar-Sargon argued that American and Israeli Jews have developed “two different ways of understanding what it means to hate Jews” based on their “almost diametrically opposed” views of what it means to be a Jew.

Her analysis seemed very persuasive: “Because the American Jewish community’s view of what it means to be a Jew is bound up in liberal values like justice and equality, American Jews view the threat of anti-Semitism as coming from those who hate us for being liberal,” she wrote. Therefore, “American Jews view the chief purveyors of anti-Semitism as white nationalists, neo-Nazis, and even President Trump when, for example, he targets George Soros for helping refugees.”

Israelis, on the other hand, tend to define their Jewishness in terms of their national identity, and therefore “they interpret a hatred of Jews as being political.” This means that Israelis regard anti-Zionism as the most dangerous form of contemporary anti-Semitism, with mainly the left and Muslims seen as fomenting this newest form of the oldest hatred.

But while these observations sound very convincing, it would be alarming if American and Israeli Jews were really so divided by a focus on the seemingly different motivations for the anti-Semitism that threatens them.

I have argued repeatedly in my previous   writings that there is plenty of evidence to justify doubts about the usefulness of trying to draw neat dividing lines between the kind of right-wing anti-Semitism that is widely seen as the main threat by US Jews and the supposedly left-wing anti-Semitism that often masquerades as anti-Zionism and threatens Israeli Jews.

It also is debatable if it makes sense to focus on the professed motives of anti-Semites.

While it is definitely true that Jew-haters throughout the centuries have been convinced that they hated Jews for good reason — i.e. because of something the Jews were accused of doing — we know that the Jews didn’t poison the wells in medieval Europe, that they didn’t snatch Christian children to get their blood for baking matzos and that all the conspiracy theories expounded in the notorious “Protocols of the Elders of Zion” are just vile fabrications.

So if you think that anti-Semites hate Jews for what Jews actually do and hold dear, you ignore centuries of evidence to the contrary and fail to understand the nature as well as the amazing adaptability of anti-Semitism.

It is therefore also wrong to conclude, as Ungar-Sargon did, that Pittsburgh shooter Robert Bowers “murdered 11 Jews in the Tree of Life Synagogue explicitly because he believed they were liberals who were helping refugees enter America” and that he was specifically motivated by “a murderous hatred for the liberal character that is the unique heritage of liberal American Jews.”

Instead, like most Jew-haters, the Pittsburgh shooter subscribed to a worldview summarized by the Nazi-slogan “the Jews are our misfortune.” Just like Jew-haters ever since the Middle Ages, Bowers and his ilk feel that the Jews are to blame for whatever bothers them most — and that’s why they would even blame the Jews for their disappointment with Trump, who might seem like “a good, strong white leader” but was only a Jewish-controlled puppet put in place to deceive and “control Whites.” 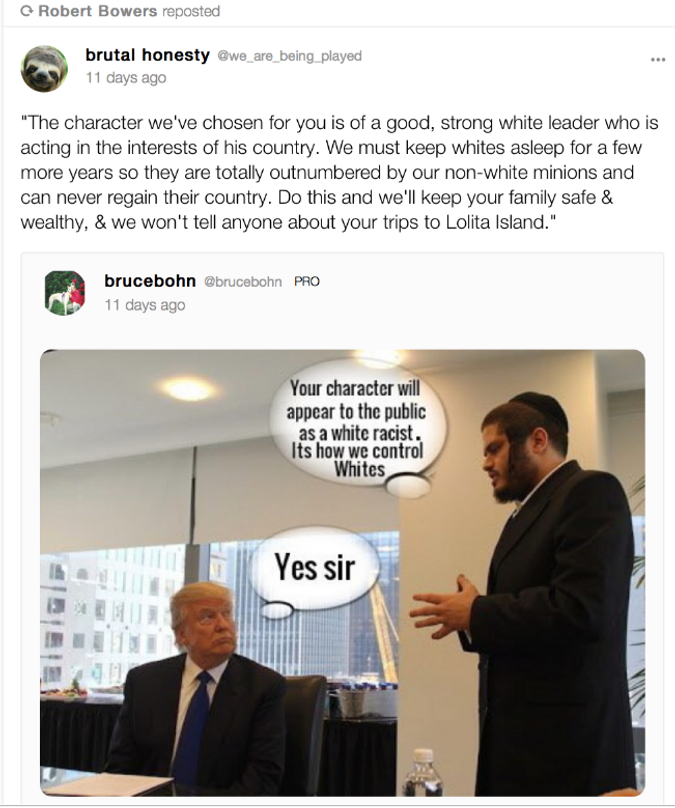 While Bowers cited Jewish support for immigrants as a motive for his attack, the long history of anti-Semitism tells us that he would have been equally inclined to murder Jews for anything else he disliked, irrespective of whether it had anything to do with liberal Jewish values.

Indeed, even if Bowers had shot Trump because he saw him as a puppet of the Jews, the motivation for his crime would still have been anti-Semitic, even though Trump isn’t Jewish, is opposed by the vast majority of American Jews and even blamed for fostering anti-Semitism.

While Naftali Bennett is a politician whose views and agenda I abhor, I think he was more or less right when he said, “From Sderot to Pittsburgh, the hand that fires missiles is the same hand that shoots worshippers.”

Yet, Ungar-Sargon argued that American Jews had every reason to reject Bennett’s words as “deeply offensive,” because in her view, “[t]he rockets at Sderot may be hurled by people who harbor anti-Semitic thoughts, but they are hurled for political, rather than racist reasons.”

The founding charter of Hamas explains very clearly why the Islamist terror group hurls rockets at Sderot. As the historian Jeffrey Herf once put it, Hamas’s “philosophy is rooted in the totalitarianism and radical anti-Semitism that has undergirded Islamism since its rise in the 1930s and 1940s.” Herf also highlighted the fact that “Hamas’ seizure of power in 2007 gave it the opportunity to make policy based on its guiding goal — namely, the destruction [of] the state of Israel.”

Indeed, the goal of destroying Israel is stated right at the beginning of the Hamas charter: “Israel will exist and will continue to exist until Islam will obliterate it, just as it obliterated others before it.”

There’s no justification for ignoring the fact that Hamas proudly associates itself with a long tradition of Islamic imperialism which leaves no room for Jewish sovereignty in any borders. Yet at least parts of the Hamas charter would sound perfectly reasonable to the Pittsburgh shooter, because they are “informed by and directly based on the Protocols of the Elders of Zion.” This western-style Jew-hatred is combined with elements taken from Islamic texts that are presented as justification for unrelenting hostility and merciless warfare against Jews.

When people openly espouse a basic worldview that demonizes Jews as an intolerable evil, it just doesn’t matter much what specific pretext they choose to justify their attempts to eradicate this evil.

Petra Marquardt-Bigman is a German-Israeli researcher and writer with a Ph.D. in contemporary history. Follow her @WarpedMirrorPMB