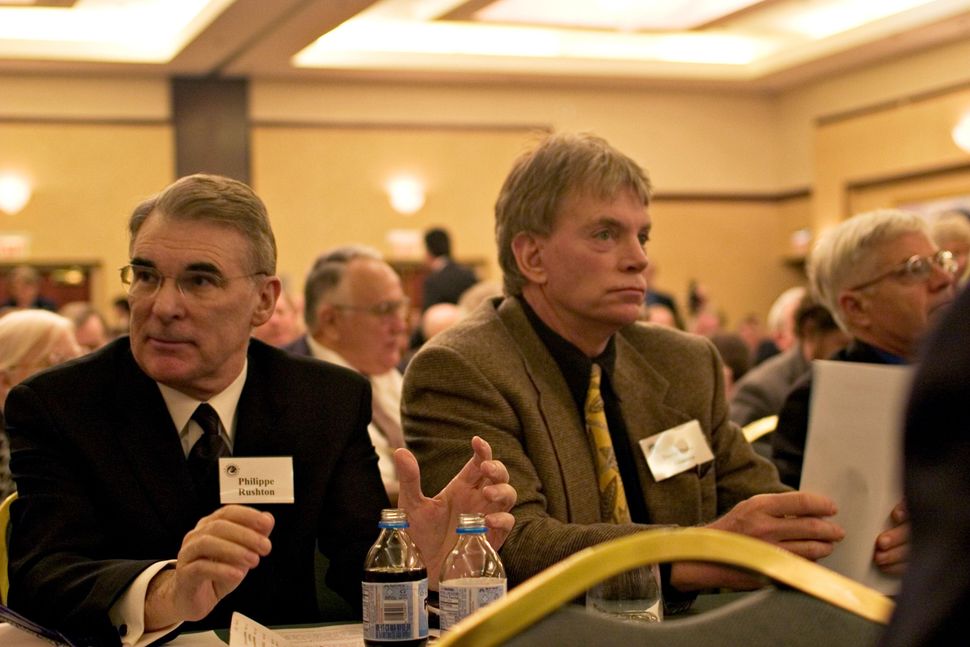 The furious reactions by Hill’s supporters reflected the widely-held conviction that he should be applauded for his passionate advocacy for Palestinian rights and that his critics were trying to silence him with unfair accusations of anti-Semitism.

And yet, in defending him, many of Hill’s supporters misconstrued his words. They elided the threat to Jews that he clearly endorsed. This white-washing of Hill’s words, while despicable, is not surprising. It is simply de rigueur on the left now to whitewash anti-Semitism on its own side and focus only on the right.

The claim that Hill had merely criticized Israel and was now smeared as anti-Semitic was particularly popular on social media.

Criticizing the actions of Israel is not anti-semitism. Since when is advocating for human rights a fireable offense? Join us in standing in solidarity with Dr. @MarcLamontHill: https://t.co/5Sd3b1qdBK

Linking to a campaign to pressure CNN to reinstate Hill, the prominent American actor Mark Ruffalo told his 4.3 million Twitter followers in a widely shared tweet: “Criticizing the actions of Israel is not anti-semitism. Since when is advocating for human rights a fireable offense? Join us in standing in solidarity with Dr. @MarcLamontHill.”

Ruffalo linked to a statement by If Not Now, a group of American Jewish millennials claiming to oppose Israel’s occupation of the West Bank while maintaining ambiguity on the question whether Israel should exist as a Jewish state.

Under the title “Tell CNN: Reinstate Marc Lamont Hill. Advocating for Palestinian Rights is not Antisemitic,” the statement asserted that Hill had been fired “under pressure from right-wing leaders and the Jewish establishment.”

Hill’s support for “Palestinian freedom” was declared to be “in no way …anti-semitic [sic!].” If Not Now insisted that “Marc Lamont Hill has spent much of his life fighting against racism and oppression in America” and argued that “[e]specially in the Trump Era, it is dangerous to link advocating for Palestinian rights to anti-semitism. It distracts from real threats to Jewish community — the rise of white nationalism.”

But this is only partially true. Or rather, it accounts for only a portion of the threats faced by Jews in 2018.

While the recent Pittsburgh synagogue shooting demonstrated all too painfully that American Jews have indeed every reason to worry about the rise of white nationalism, Israeli Jews obviously have as much reason to worry about Palestinian terrorism and unrelenting Arab-Muslim enmity towards the Jewish state.

And it was precisely because Hill’s UN speech — as well as his previous activism — seemed to justify both Palestinian terrorism and the goal of doing away with Jewish sovereignty between “the river and the sea” that his speech was so controversial.

It was a fact that was lost on Hill’s left-leaning supporters, including his many Jewish supporters.

It was not lost on David Duke, the former Grand Wizard of the Ku Klux Klan. According to the Anti-Defamation League (ADL), David Duke “has been active in the white supremacy movement for over 40 years” and could be considered as “perhaps America’s most well-known racist and anti-Semite.”

And when it comes to Israel, Duke tends to agree with some prominent lefties, including Hill, whose views on Israel Duke tweeted “no decent person can disagree” with.

Might disagree with Marc Lamont Hill on much, but no decent person can disagree for his beliefs on Israel. .Israel was created by horrific human rights crimes – forced ethnic cleansing by terrorism because the Zionists wanted a “Jewish State!” Free Palestine & Free the USA too! https://t.co/lSuV1HEuNP

Ironically, Hill himself regards Duke’s endorsement as a sign that the endorsee should be condemned. Likely in response to President Trump’s false claim that white South Africans are possibly being killed and robbed from en masse, Hill tweeted, “The fact that David Duke is thanking Trump for his South Africa tweet says everything.”

The fact that David Duke is thanking Trump for his South Africa tweet says everything.

Hill is right: it “says everything” when David Duke endorses statements that clearly reflect the thinking and worldview of the person who made the statement. And it arguably “says everything” that when Duke agreed with Hill, it was by no means the first time that he looked for — and found — common ground with prominent activists who demonize the Jewish state in terms echoing age-old anti-Semitic tropes.

A few years ago, when the American writer and activist Max Blumenthal focused all his energies on demonstrating that Israel was the new Nazi Germany, he garnered not only praise in progressive circles, but also got some well-deserved endorsements on Duke’s website, which described “Blumenthal’s recent book and much of his other work” as “extremely valuable.”

The far-right site even objected when Blumenthal’s work was denounced as anti-Semitic by the Simon Wiesenthal Center, asserting that he and others were “placed on the Zionist blacklist simply for publicly recognizing some of the obvious truths.”

Duke also keenly appreciated the work of Israeli academic Shlomo Sand, whose efforts to depict the Jews as an “invented” people with an “invented” homeland got rave reviews on websites dedicated to the relentless vilification of Israel, such as The Electronic Intifada and Mondoweiss.

When Pink Floyd star Roger Waters provided the radical magazine CounterPunch with his take on the views fashionable among far-left activists in December 2013, David Duke was delighted to see that “Waters has revealed that the ‘Jewish lobby’ controls the political discourse in America and the music industry in America — and uses that power to suppress any dissent about Israel.”

It also didn’t escape Duke’s attention that prominent American-Palestinian activist Linda Sarsour sometimes made statements that he could fully embrace:

What’s that saying about a broken clock? https://t.co/63JAdcE1Ub

Given that both Sarsour and Hill have ties to Nation of Islam leader Louis Farrakhan and have been reluctant to clearly denounce him for his breathtakingly vile anti-Semitism and all-around bigotry, it is also noteworthy that David Duke agrees that the notorious hate-preacher deserves some respect — very much for the same reason as Linda Sarsour:

There is much that Mr. Farrakhan and I disagree about. However, I do respect him for always standing up for his people & their interests. https://t.co/J6Xpu4zHu5

There is clearly a pattern that points to substantive agreements between the far-right and the far-left when it comes to the world’s only Jewish state.

David Duke doesn’t seem embarrassed to find common ground with the far left. But progressives who claim to oppose anti-Semitism should be ashamed to find themselves in such ugly company.

Petra Marquardt-Bigman is a German-Israeli researcher and writer with a Ph.D. in contemporary history. Follow her @WarpedMirrorPMB