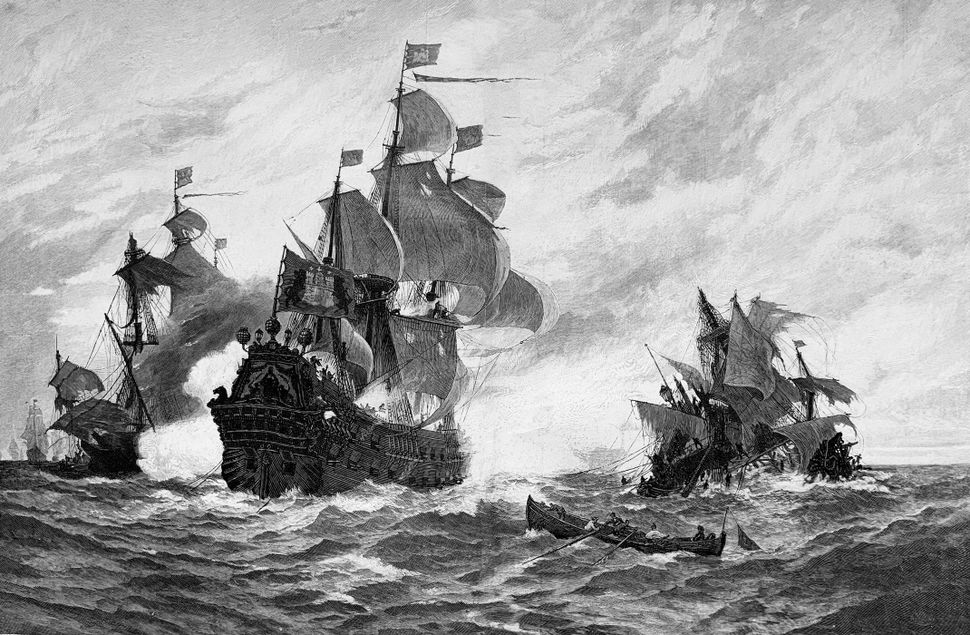 A recent internet fascination with sea shanties must have prompted the Forward editors to concoct a Jewish connection. “Once Upon A Time, Jewish Pirates Ruled the Sea” says the headline. Well, shiver me timbers! Or is it sit shiva and timber?

Or should I say Ahoy Vey?

This is just the latest shot across the bow from an armada of examples of how the Forward obsessively overreaches to spin a Jewish compass on just about everything. A Jew invented this! A Jew invented that! The Secret Jewish history of this or the hidden Jewish story of that, the untold or undiscovered Jewish link to….well you get my drift. The editors need to set this anchor a little tighter.

I was prompted to write a similar letter in 2018 after the Forward published article claiming that the larger-than-life Danish explorer and adventurer Peter Freuchen was Jewish. That, too, was a stretch.

There indeed have been Jewish pirates, in ancient times and due to the Spanish Expulsion. Some believe that Hebrew sailors in the Levant almost crippled Rome by marauding shipments of wheat from the breadbasket of Egypt. However, this hyperbolic and sensational headline was way over the top of the mast (masthead?). And somehow the Forward missed that this history was documented in a popular 2008 book titled “Jewish Pirates of the Caribbean.”

The day that “Jewish Pirates of the Caribbean” hit the stores, its author, a New York native named Ed Kritzler was intently watching sales (sails?) rise from the depths on Amazon.com (depths of the Amazon?). Ed was a guest that day in my home, just a mile from the U.S. Naval Academy, where there are four buildings and memorials honoring Jewish naval officers, some of whom may have even fought pirates. I arranged for him to speak that night at a nearby synagogue.

Besides pirates, there are plenty of other Jewish maritime connections to explore. Start with Moses, who navigated his own tiny boat down the Nile River while just an infant. Later of course, he led his people across the Red Sea, which was conveniently dry for a time. Scholars are divided as to whether Moses sang sea shanties to the Israelites.

And what about submarines? The Forward could have published an historical account of Russian-born Adm. Hyman Rickover, as in the “father of the nuclear Navy.” How about Maurice Rindskopf, Herbert Irving Mandel or perhaps even Russian naval officer Boris Gindin, who served aboard the actual Soviet submarine FFG Storozhevoy that inspired Tom Clancy’s bestselling “Hunt for Red October?”While Rickover may be known to many, the amazing and true stories of these men are vastly more exciting and noteworthy than the romantic, fanciful, misty-eyed speculation about Jewish pirates ruling the sea while singing sea shanties.

The intersection of Jewish history and maritime history, including the migrations from Spain to the Americas has not been covered as much as compared to other mass migrations in Jewish history, whether Iberian Jews went to Turkey, Egypt, or the New World.

That is where the story of more-modern Jewish pirates arose, but to hype it as the Forward did prompts me to ask why must we glorify and romanticize to bring these stories to the surface? The writer, Mira Fox, and the Forward, short of walking the plank or getting keelhauled, should at least get a few lashings on deck with a wet kugel or spend an hour peeling potatoes in the galley to complete this kugel.

In the final analysis, the most telling piece from this article may have been the real “hidden” or cryptic impetus that explains why the Forward sailed into this story. Fox wrote of these pirates that “Jewishness seems to serve as ethnic identity more than religious affiliation for most pirates. At most, their Jewishness was likely the part of the impetus toward a job on the fringes like piracy.”

That’s something that I would hope would lead the Forward’s editors to dig into their treasure chests, put some pirate weed in their pirate’s pipe and puff on for a bit. Or grab a bottle of Captain Morgan and….RUMinate.