Reality and Dreams: Michael Feinstein and Dame Edna Together at Last 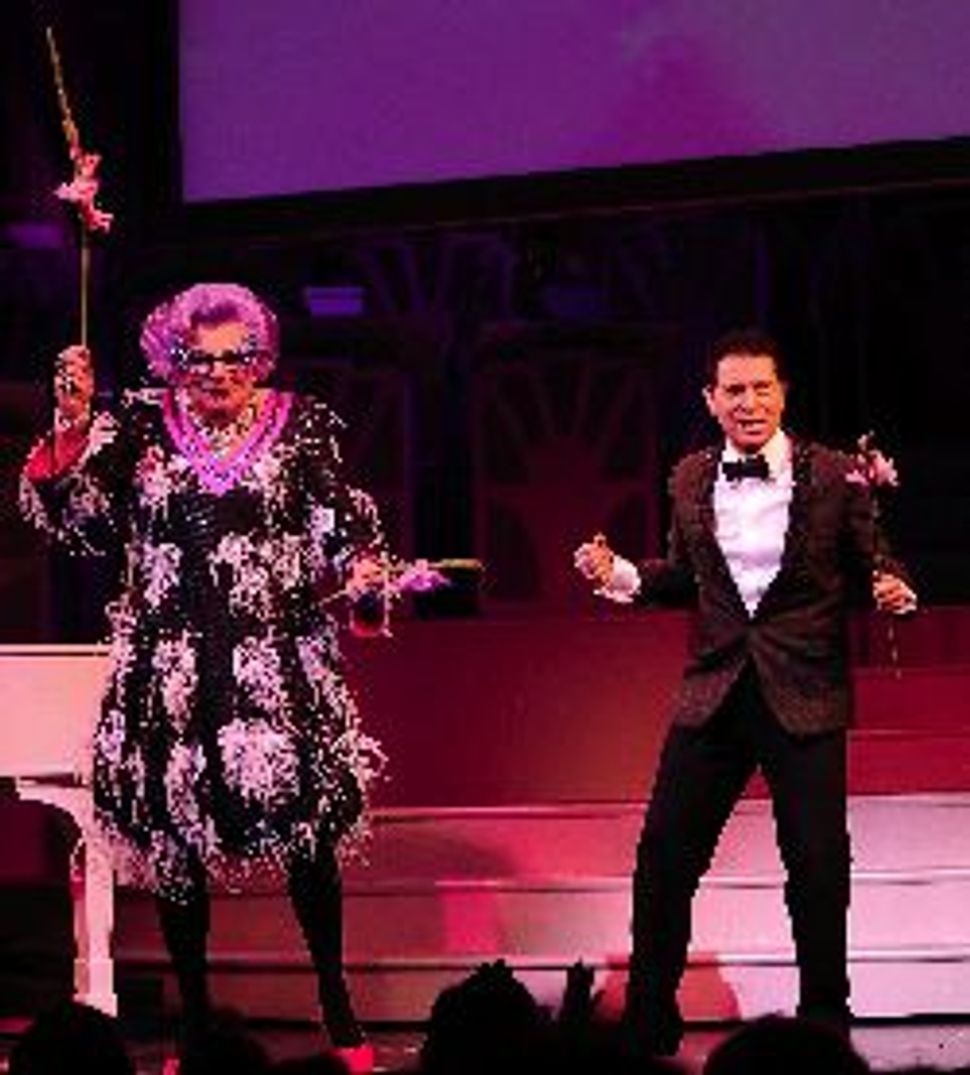 The Ohio-born Jewish entertainer Michael Feinstein opened on Broadway on March 18 in a musical review, “All About Me,” co-starring the Australian comedian Barry Humphries (better known as Dame Edna Everage). As Feinstein explains in his 1995 memoir, “Nice Work If You Can Get It: My Life in Rhythm and Rhyme” (Hyperion), he has devoted his life to preserving and celebrating works by Tin Pan Alley composers, a great many of whom were Jewish. Feinstein’s reedy voice may be wispy, but his piano playing is charmingly fluent, when not overelaborate, in songs famous, forgotten and almost lost to posterity.

“All About Me” celebrates a New York that never existed beyond the Broadway stage. It is this surreal aspect of Broadway musical expression that makes the 76-year-old Humphries such a canny choice as a stage partner for Feinstein, whose persona as nice Jewish boy is due, at age 53, for some freshening up. Humphries’s warm rapport with Jewish comedians like Matt Lucas, and brilliant timing, make his relations with audiences a delight to watch. Dame Edna is so amenable of late that she has even claimed implausibly to be “possibly Jewish,” maybe for an even closer rapport with her co-star.

A sharper satiric edge was visible in Humphries’s earlier work. In 1971 he offered Australian television audiences a sober warning about the dangers of sitting on Santa’s lap at Christmastime, and as the character of Dame Edna evolved in the 1970s, Humphries also created a gross Australian character, less known internationally, Sir Les Patterson, an amalgam of everything potentially disgusting about Australian life. An acid test of Feinstein’s abiding status as nice Jewish boy and doyen of the elegant Park Avenue supper club Feinstein’s At the Regency would be to have him confront Sir Les Patterson instead of Dame Edna on matinees. A steelier, more defiant Feinstein might emerge from the struggle.

To see a promo for “All About Me” on Broadway, click here:

For Dame Edna in prescient maternal mode in 1978, click here:

Reality and Dreams: Michael Feinstein and Dame Edna Together at Last