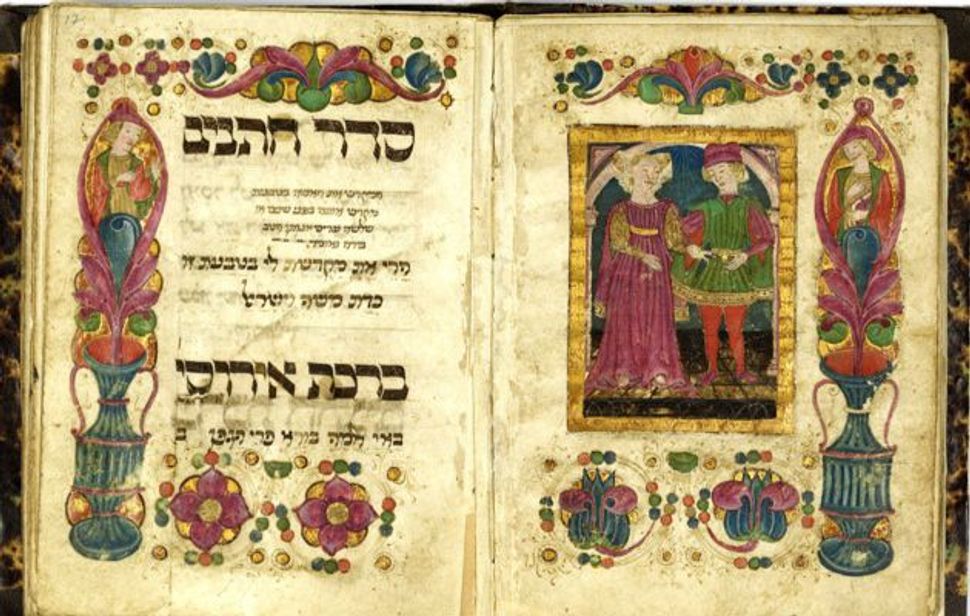 A new exhibition at the Yeshiva University Museum presents a sampling of such works, mostly Esther scrolls, Jewish marriage contracts and various manuscripts and printed books, from the private collection of Renee Braginsky. The exhibit, called “A Journey Through Jewish Worlds,” traces the history of Jewish life in relation to sacred Jewish texts and important documents.

“Texts are the Jewish world in which we live,” said Gabriel Goldstein, Associate Director for Exhibitions and Programs at YUM, noting that the exhibit is aimed at charting that history and that relationship vis-à-vis the texts themselves. While the exhibit includes some items that are especially significant from an historical perspective, the show’s primary strength is in the “quality of the artistry,” Goldstein said.

Some of the show’s highlights include the earliest known illustrated Esther scroll, which was written by a woman in 16th-century Venice. Another is an early to mid 19th century “marriage” contract between God and the Jewish people, from Gibraltar, which is read in some North African Jewish congregations on Shavuot. This one shows clear British influence, and points to the fact that Jews often lived at the intersection of various cultures.

The earliest item on display is a 1288 copy of the Sefer Mitzvot Gadol, a halakhic work written by Rabbi Moses ben Jacob of Coucy. Also intriguing is an original 1720 manuscript on Jewish mysticism by the Vilna Gaon, who was well known for his opposition to Hasidism.

Eighteenth century illustrated works are another focus of the exhibition. Despite the advent of the printing press some centuries prior, a renaissance of illustrated manuscripts was taking place, and court Jews, wealthy and prominent in 18th century Vienna, commissioned such works. Among them is a heavily illustrated Purim book, various books of blessings (including blessings that were to be said upon encountering a king, not an unlikely occurrence for court Jews) and books with prayers for circumcision.

In terms of tracing the Jewish journey through worlds, one item in particular stands out. It is a Tanakh, or Bible, that was begun in Spain in 1491, and completed in Portugal in 1494, soon after the Spanish expulsion and just before the Jews were also expelled from Portugal.

And, just in time for Passover, the exhibit also includes several heavily illustrated Haggadot, including the earliest known manuscript to be illustrated by a woman.