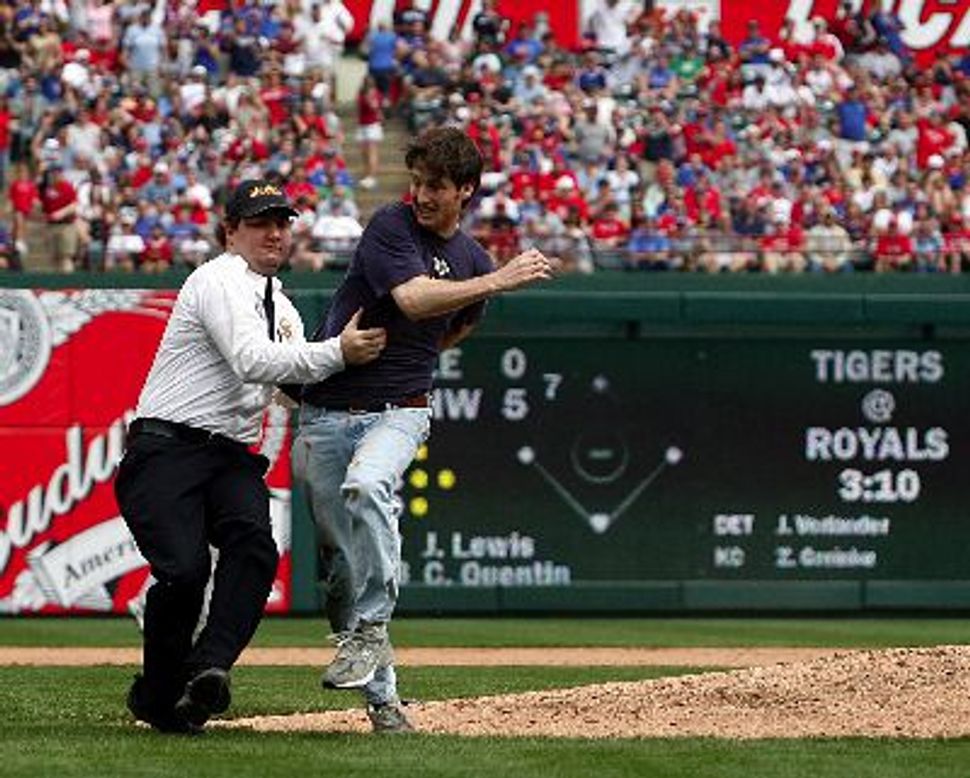 Jeremy Pinsly doesn’t play professional baseball, but during the Texas Rangers’ opener on Monday, he stole second base.

Here’s how it went down: The Blue Jays were leading the Rangers 4-3 at the bottom of the eighth inning. So Pinsly traded his hockey T-shirt for a friend’s Rangers one, waved goodbye to his friends and their center-field seats, and stepped to the edge of the box where a barrier loomed — higher than the homerun wall — meant to separate spectators from the field.

Pinsly sidled up to a man at the wall’s edge, and asked, “Is this a bad idea?” before leaping over it, hanging, dropping on to the concrete, and finally hopping over the lower second wall and on to the field.

“I took off sprinting,” Pinsly said. “There was a moment when I knew it was in the bag.” Since he had plenty of time, the Dallas resident dove headfirst into second. The crowd cheered. He gave a half-hug to Blue Jays second baseman Aaron Hill (which, “almost got me in legal trouble”) then waved his hands in the air (“to pump up the crowd”). Pinsly waited patiently to be escorted from the field by security guards, who walked him down the third baseline. People screamed and took pictures. Pinsly hollered, “Go Rangers.”

“I’m not even a big Rangers fan,” he told The Shmooze.

He didn’t have a driver’s license on him, so he produced a traffic citation, and was supervised for the remainder of the game. Pinsly is banned from Rangers Ballpark for a year, and Jewish or not, he is $1,100 richer. He’s also sort of famous — strangers shout, “Hey you’re that guy,” and he’s received Facebook messages ranging from marriage proposals to genuflection. One note sums up the afternoon well: “dude … amazing.”

Pinsly admits that fame has been seductive, “If I had known, I would’ve tried to do some more stuff out there. Hindsight’s 20/20.”

The Rangers pulled out a win in the bottom of the ninth, but Pinsly can’t say whether or not he had anything to do with it.

“You never know. You’d like to think so,” he said.