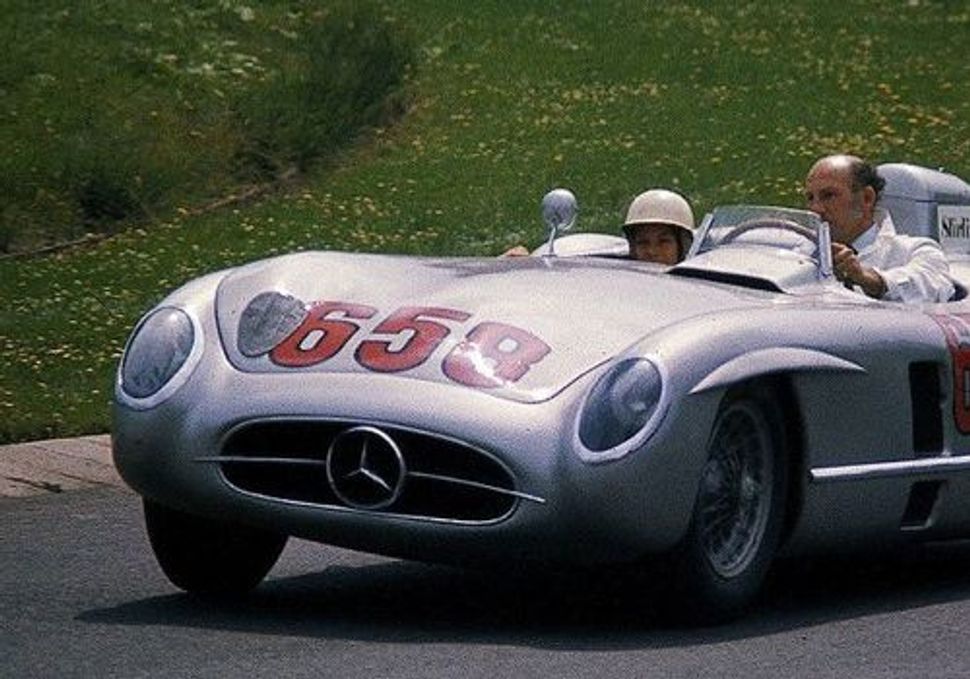 Having recently, at the age of 80, survived a three-story fall down the lift shaft of his Mayfair home, Sir Stirling Moss will be around to publicize his new autobiography “All My Races.”

The authorized biography of this legendary racing driver (Weidenfeld & Nicolson, 2002) explains how Moss was born in London in 1929 to a Jewish family (his grandfather changed his last name from Moses to Moss to better assimilate). Sir Stirling’s gritty new book further celebrates the courageous and insatiable drive which made him into a driver whom some aficionados still consider the greatest of all time.

Moss’s father, a Jewish dentist and part-time racing driver himself instilled physical courage in the boy, who was bullied at school for being Jewish. Never mentioning the bullying to his parents, Moss instead used it as motivation to succeed.

The sheer number and variety of racing formats enumerated in “All My Races” is astounding, as is Moss’ oft-stated regret at having retired “too early.”

Within the milieu of auto racing, however, Moss is neither the first nor the last overachiever of Jewish origin. 1920s British racer Woolf Barnato was the son of 19th century mining tycoon Barney Barnato, born Barnet Isaacs. UK driver Sheila van Damm likewise came from a Jewish family. In France, there was René Dreyfus and François Cevert, born Goldenberg. Ohio-born Mauri Rose is a member of the International Jewish Sports Hall of Fame in Netanya, Israel, while Sweden’s Joakim Bonnier came from a family of German Jewish origin, who changed their name from Hirschel.

The noted Dutch driver Tom Coronel is also Jewish, according to reports. 23-year-old American driver Jon Denning, from a New Jersey Jewish family, has spoken about openly antisemitic comments overheard at NASCAR races, where he is the only Jewish driver in an overwhelmingly evangelical Christian milieu.

Happily, Denning and today’s other young Jewish women and men who feel a need for speed can look to time-honored and closer predecessors for inspiration on how, as with the great Stirling Moss, oppression can be translated into motivation.

Watch a tribute to Sir Stirling Moss from October 2009 below.