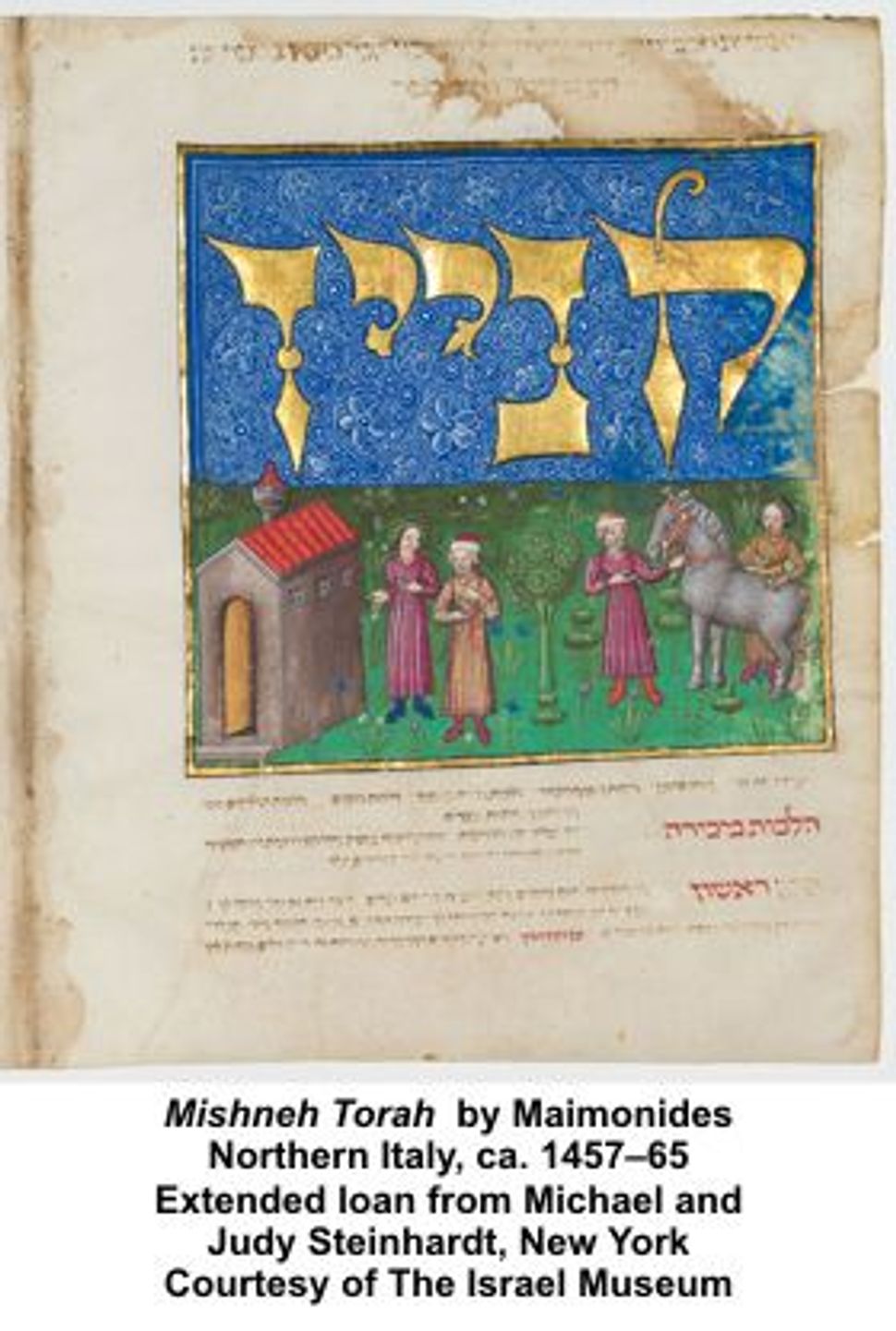 When the Israel Museum reveals its newly renovated campus in July 2010, it will display a curious (and extreme) blend of Renaissance and modernism.

The museum will feature two large-scale, site-specific works by Indian sculptor Anish Kapoor and Danish installation artist Olafur Eliasson, as part of the site’s $100 million architectural reconfiguration. And, for the occasion, the museum will receive — on extended loan from New York benefactors — an illuminated manuscript by a scribe called Nehemia of the final eight books of the Mishneh Torah (originally written by Maimonides in the 12th century). The manuscripts — the first volume is at Rome’s Vatican Library — will sit in the Jack, Joseph, and Morton Mandel Wing for Jewish Art and Life.

The Kapoor and Eliasson installations increase the museum’s holdings of both artists and extend the sculpture into the heart of the new axis of entry. The museum, perhaps more famous as the home of the Dead Sea Scrolls, also has a beloved sculpture garden containing numerous iconic works.

Eliasson and Kapoor are recognized for creating visually striking works that inspire engagement, interaction and awe.

Eliasson, who famously installed four skyscraping waterfalls in New York Harbor in 2008, will contribute a 13-meter-long series of 360 hand-painted canvases that will, from a distance, look like an elongated rainbow. As you approach, however, each individual canvas will become visible. Whereas Eliasson’s piece is more conceptual, distorting our concept of light and space, Kapoor’s stainless steel hourglass sculpture — called “Turning the World Upside Down, Jerusalem” — has a spiritual spin. Sitting at the highest point on the museum’s campus, the sculpture inversely reflects the sky in the hourglass’s base, while reflecting the museum’s landscape in its upper half. It’s meant to capture Jerusalem’s inherent mythical and spiritual duality.

The Mishneh Torah — in the Northern Italian Renaissance style — emphasizess the museum’s considerable historical collections, and will add to its already robust cadre of illuminated Hebrew manuscripts. Maimonides’s Mishneh Torah is one of the few works its author wrote in Hebrew rather than in Arabic, his native tongue. Illustrated with six painted panels festooned with gold leaf and lettering, the volume also has scholarly significance: it contains previously unknown rabbinic interpretations.

Despite the Mishneh Torah, the contemporary installations, prominent as they are, are sure to cause a stir on the international art scene.

This blog entry has been amended to note that the manuscript displayed is a copy by Nehemia from the 15th century.