Antisemitic Riots in Oslo: Part of a Trend? 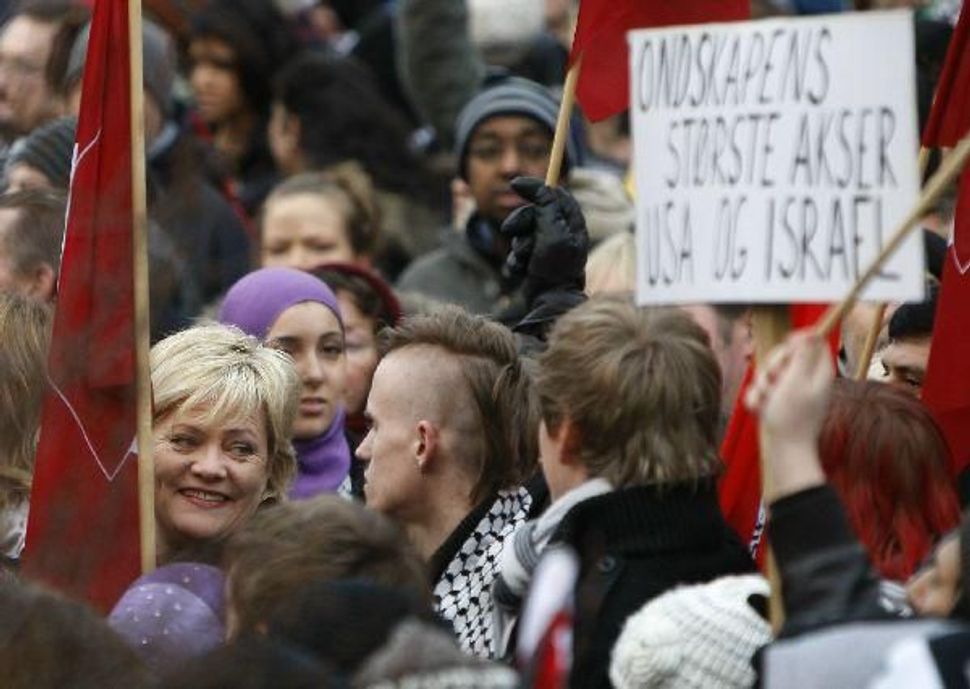 According to “The Anti-Jewish Riots in Oslo,” a cogent new book by Norwegian historian Eirik Eiglad, the riots of January 2009 in Oslo, ostensibly against the war in Gaza, actually followed “age-old patterns of antisemitic hatred.”

Himself beaten, kicked, and spit on by demonstrators, Eiglad, who had not joined any side, recounts how a deranged Internet rumor that McDonald’s restaurants are Jewish-owned led to five McDonald’s in Oslo being burned by angry mobs. Norway’s then-Minister of Finance and current Minister of Education Kristin Halvorsen was photographed smiling next to a poster reading: “The greatest axis of Evil, USA and Israel.”

Along with a national neurosis over finite wealth based on exhaustible reserves of oil and herring, Norway is currently experiencing a stiff-necked rebirth of nationalism. Oslo’s paltry Jewish population, only 800 by one count, is the time-honored target.

One symptom was the bizarre government decision to celebrate Norwegian author Knut Hamsun, once a taboo subject for his wartime Nazi collaboration. In 2009, among other honors, a Hamsun postage stamp was printed, shocking many observers.

When I visited Oslo myself a couple of years ago, I noticed a poster of a man in a downtown bookshop and asked if it was advertising an author’s appearance. “No,” a Norwegian told me cheerily, “That’s Quisling!,” referring to the notorious Nazi collaborator Vidkun Quisling, whose face happened to be on the cover of a Norwegian history magazine that month.

That same trip, I revisited the Henie Onstad Art Centre south of Oslo, where a splendid modern art collection had been donated by the Olympic skater and Nazi collaborator Sonja Henie. On a previous visit, I noticed that Henie’s museum trophy room featured a giant news photo of Henie shaking hands with Hitler as Goebbels looked on, grinning. On my second visit, I noticed that this photo had vanished. When I asked a museum curator why, I was told the photo confused some visitors, who might interpret its presence other than as it was intended—an ironic reminder of Henie’s culpable stupidity. This confusion is unfortunately being experienced nationwide, overshadowing Norway’s past legacy of heroic wartime resistance.

Antisemitic Riots in Oslo: Part of a Trend?