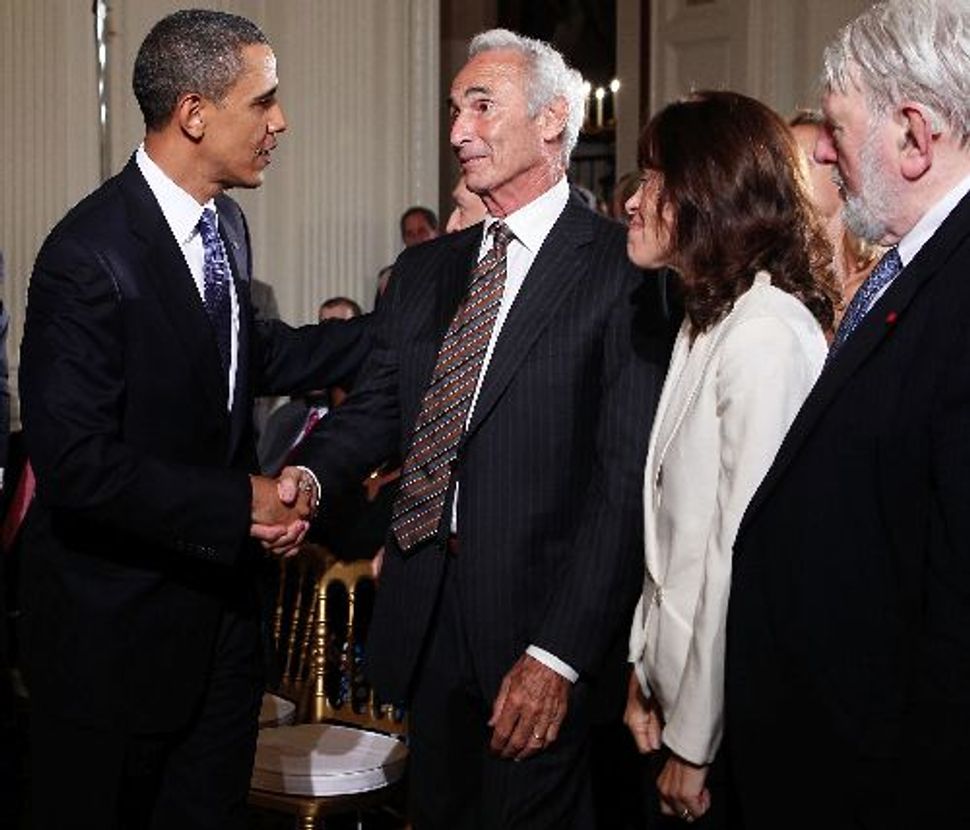 True, it was an opportunity to shake hands with President Obama, to shmooze with Supreme Court nominee Elena Kagan and to count more than 30 Jewish lawmakers who showed up for the first ever White House Jewish American Heritage Month reception.

But for many, the most thrilling moment was getting to shake hands with and ask for an autograph from baseball legend Sandy Koufax. At 75, Koufax was the biggest attraction in a room filled with accomplished Jewish Americans. Even Obama chose to make Koufax the center of the only joke he weaved into his speech. “Sandy and I actually have something in common — we are both lefties,” Obama said. “He can’t pitch on Yom Kippur; I can’t pitch.”

The guest list at the event — which included an hour-long reception (with kosher food, according to a White House aide), a short welcome by the president, two songs by Regina Spektor and a reading of an Emma Lazarus poem — was far from the usual inventory of Jewish leaders that attend the White House’s annual Hanukkah receptions or roundtable discussions. Only a few organizational figures were on hand, most of them with close ties to Obama (Conference of Presidents chairman Alan Solow and AIPAC president Lee Rosenberg, both of whom have known Obama from his Chicago days; Nathan Diament, who used to shoot hoops with Obama when the two attended Harvard Law School; and Rabbi David Saperstein, who gave the invocation at the Democratic convention.) Instead, the White House invited Jewish Americans who they believed represented different facets of the history and culture of Jews in America. They included Supreme Court justices Ruth Bader-Ginsburg and Stephen Breyer, and athletes like Koufax, Olympic swimmer Dara Torres and former professional basketball player Nancy Lieberman. Among the journalists invited were Diane Sawyer, Thomas Friedman, David Brooks and Roger Cohen. And, of course, almost all Jewish senators, members of Congress and Jewish White House officials were on hand.

“Yes, Jewish Americans have garnered success in industry and in government — as we can see by the guests gathered here today. Yes, Jews have helped to pioneer incredible advances in science and medicine across countless fields,” said Obama in his speech, “but the contributions of the Jewish community to America run deeper. As a product of history and faith, Jewish Americans have helped to open our eyes to injustice, to people in need and to the simple idea that we ought to recognize ourselves in the struggles of our fellow men and women.” Obama mentioned the role Jewish Americans played in fighting against racism and for women’s and workers’ rights. After Obama’s speech, Rabbi Alysa Stanton read the Lazarus poem “The New Colossus,” which is engraved on the Statue of Liberty. Stanton is the first black woman rabbi in America.

Was the high-profile reception part of the Obama administration’s charm offensive intended to win back support of Jewish Americans? “It’s just a nice thing to do and it was planned way in advance,” said one attendee as he walked out of the East Room into the blazing Washington sun. The fact that those invited were not representatives of the Jewish organizational establishment is further proof that the gesture was genuine, not politically motivated, commented another guest.