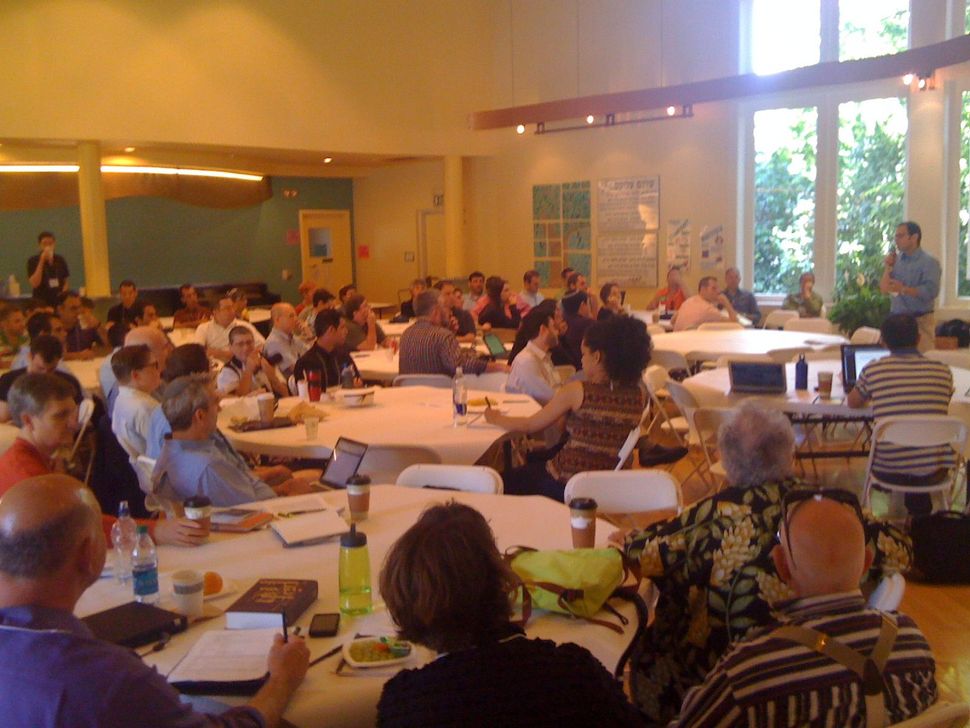 LGBTQ Jewish conferences aren’t new, but over the next couple of days in Berkeley a different kind of gathering is taking place. Called a “Jewish Movement-Building Convening” (using the URL JewishInclusion.com), the meeting is, ironically, an invitation-only event. The net was cast wide however, and it seems that just about every LGBTQ-Jewish related organization is represented. Funding for the conference comes mainly from the Charles and Lynn Schusterman Family Foundation, with support from the Richard and Rhoda Goldman Fund.

Organized by Nehirim, Keshet, NUJLS and Jewish Mosaic, the conference includes representatives from Congregation Beit Simchat Torah, JQ Youth, He’Bro, World Congress of LGBT Jews, and about 50 other organizations including my own, GayGevalt. Thanks to the gathering I’ve already had the privilege of meeting Josh Furman, co-founder of Kolenu in Seattle, WA. The group has only been around for a year and a half, and already draws over 150 people to its programming.

As befits any group of over-achievers, the convening has lofty goals, including forging “a strategic vision to inspire and guide our actions over the next three years” and reducing “intra-movement tensions.”

Will it work? The world of LGBTQ Jewish organizations and projects raises millions of dollars a year and engages thousands of participants. And with founders, executives, and visionaries from organizations old and new, it will be interesting to see how quickly everyone jumps on board.

Having worked with many of the organizations in the room, however, I know there is a desire for more collaboration and cooperation. And with the recent mergers of Jewish Mosaic with Keshet and NUJLS (National Union of Jewish LGBT Students) with Nehirim, this could be the dawn of a new and fabulous era in Jewish LGBT rights, service and education.

Gabriel Blau is the founder of GayGevalt, the online event calendar for and by the Jewish LGBTQ community in the U.S. He is on the Board of Directors of Congregation Beit Simchat Torah, on the Board of Advisers of Nehirim, and on the leadership team for the LGBT Religious Archives Network.