Jews and Bulls: A French Philosopher Defends the Corrida 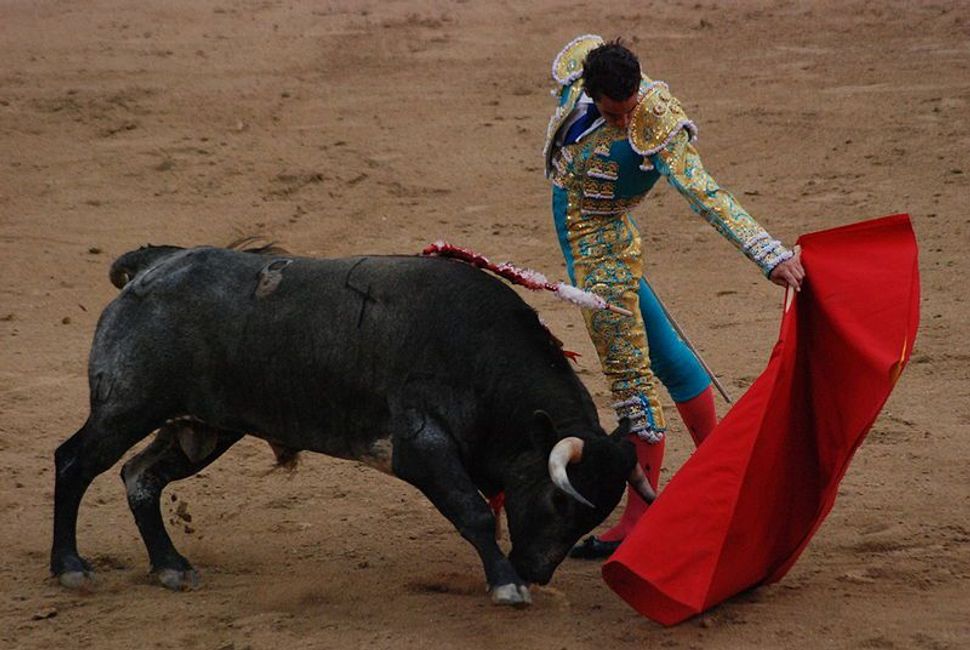 When Jews try to fight bulls, the results can end in tears, but the simple desire to watch bullfights has a more ambiguous outcome, as proven by the latest book by the French Jewish philosopher Francis Wolff.

An author of academic works on Aristotle and Socrates who teaches in Paris, Wolff should not be confused with the late German Jewish jazz photographer of the same name. France’s Francis Wolff has organized seminars in honor of Jacques Derrida, but he is more noted — or notorious — for his defense of bullfighting, both in France and Spain.

As a follow-up to his 2007 “Philosophy of the Corrida” from Les éditions Fayard, Woolf, who frequently lectures on bullfighting’s ethics and aesthetics, has just published a new short book, “50 Reasons to Defend the Corrida” with Mille et une nuits/Fayard éditions.

European talk radio hosts report, according to Wolff, that only two topics incite home listeners to write thousands of angry letters: the “corrida and (I’m ashamed to link the two, but so goes human nature) the Israeli–Palestinian conflict.” Wolff adds that “disproportionate” responses in the context of vast worldwide suffering are “always irrational.”

Wolff scorns animal rights activists who dare to compare bullfighting to Nazism, hyperbole that he describes as “approaching a kind of Holocaust denial.” While bullfighting was exploited as a popular spectacle by Spain’s dictator Franco, Wolff notes, it is not inherently fascist. Instead, Wolff states, like religion in Karl Marx’s famous definition, bullfighting may be the “opium of the people…the spirit of a heartless world.”

Wolff warns against blaming bullfighting on the “dark history of Spain,” along with tragedies like the 1492 Jewish Expulsion, or the Inquisition. Instead he cites creative personalities, many of them Jewish, who have been inspired by the corrida, including the Belgian painter of Russian Jewish origin Pierre Alechinsky, author Gertrude Stein, and the filmmakers Sergei Eisenstein and Abel Gance.

Preferring “ceremonial rituals” like bullfighting over “pagan rites,” Wolff asks if we ban bullfighting, “who or what will be banned tomorrow?” Wolff compares those who wish to ban the corrida outright with the Afghan Taliban who destroyed giant statues of the Buddha, even linking bullfighting and Buddhism as being “deeply rooted in history and inserted into today’s modernity.”

Wolff may not cause many animal rights activists (or Buddhists) to shout “¡Olé!” but he has eloquently argued his case.

Watch Francis Woolf discourse in 2009 on the relationship between man and animal:

Jews and Bulls: A French Philosopher Defends the Corrida