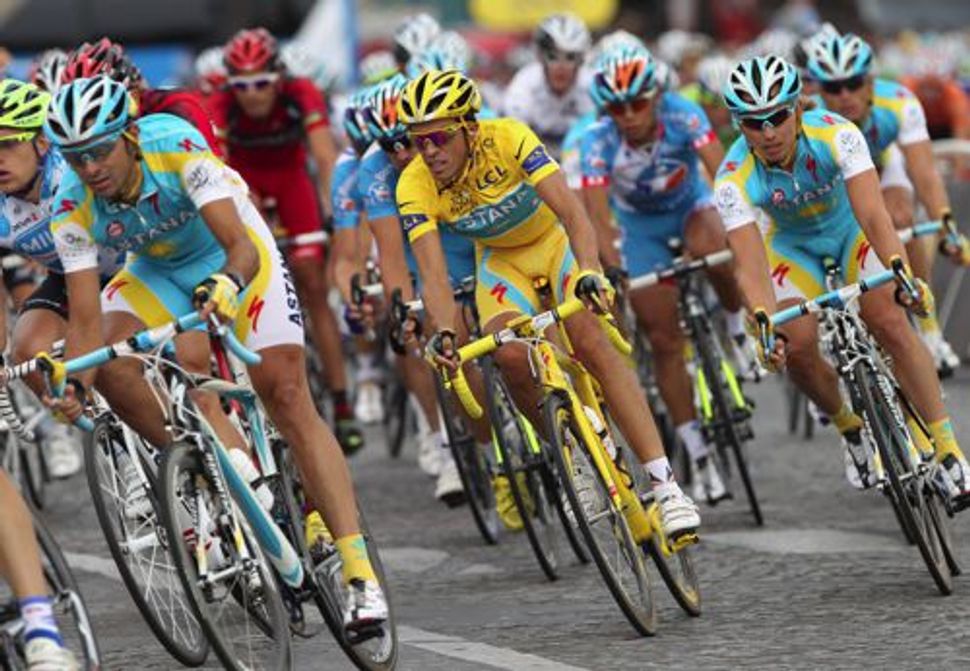 It turns out that the world’s most famous bicycle race, the Tour de France, has an unlikely origin: It was a direct result of the notorious Dreyfus Affair.

The slightly condensed, rather confusing story goes something like this: When pro-Dreyfus Émile Loubet became president of the French Republic in 1899, he was attacked (and beaten on the head with a walking stick) by the passionately anti-Dreyfus Count de Dion, one of France’s major bicycle and auto manufacturers. De Dion was jailed for the attack, and the resulting scandal was featured prominently in the then-major daily sports paper Le Vélo (The Bike), whose editor, Pierre Giffard, was just as passionately pro-Dreyfus.

De Dion, who happened to be the biggest advertiser in Le Vélo, was so infuriated, he pulled his ads and persuaded fellow advertisers Adolphe Clément and Edouard Michelin to found a rival sports paper, L’Auto-Vélo. After Giffard sued, the name became simply L’Auto. L’Auto was failing, and so, in desperation, a meeting was held regarding what could be done to save it. The solution, creating the biggest, longest bicycle race, ironically was the suggestion of a reporter poached from Le Vélo. The race’s antisemitic purpose was explicit in the announcement that sending “strong, uncomplicated men” all over France would be done with the same force with which Émile Zola defended “the plowman” (a derisive reference to Zola’s brave, historic defense of Dreyfus, “J’accuse…!”). Outside of that reference, L’Auto made a policy of no politics in its pages. The 1903 Tour de France was such a sensation that it put Le Vélo out of business and L’Auto became France’s major sports daily.

Ironically, after the liberation in 1944, L’Auto itself was charged with treasonous collusion with the enemy. The government seized the rights to both the paper and the Tour de France. The editor, however, was permitted to publish a new paper, L’Équipe (The Team). Charles de Gaulle allowed L’Équipe to regain the rights to the Tour de France, reportedly because the only alternatives had communist ties, and because right-winger Philippe Amaury, a member of the Résistance, defended the editor against charges of Nazi collaboration. His reward? L’Équipe — still France’s major sports paper — became part of his media empire, Éditions Philippe Amaury, and EPA’s subsidiary Amaury Sport Organization currently runs the Tour de France, as well as other sports events.

If there was any doubt of the continuing divisiveness over L’Affaire Dreyfus” when Socialist French President François Mitterrand commissioned a statue of Alfred Dreyfus in 1985, the minister of defense refused to install it in the intended location, the École Militaire.