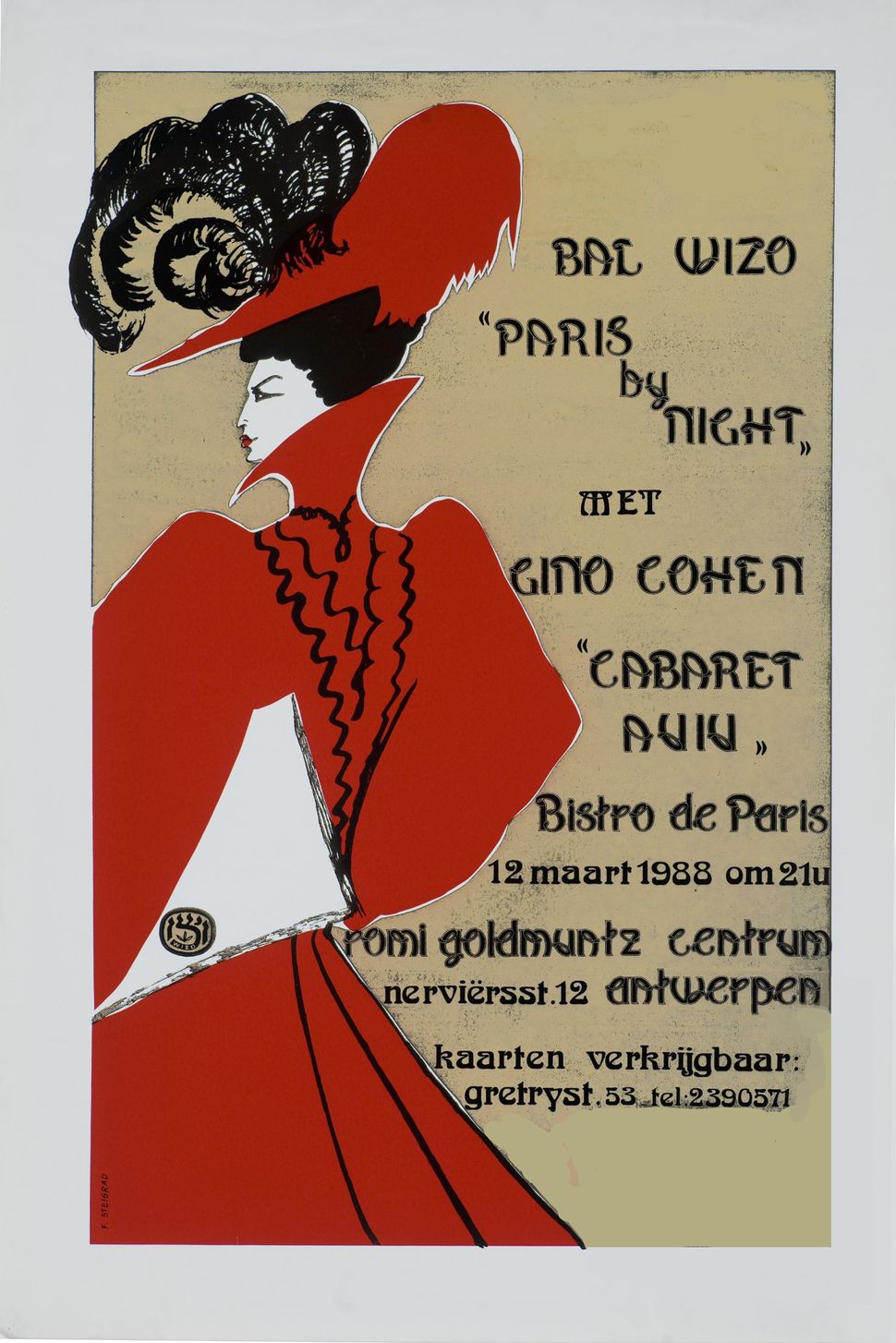 Posters can be a form of performance art. This is one conclusion to be drawn from “Public Notice: Jewish History in Posters,” a new exhibit at Brussels’ Jewish Museum of Belgium which opened June 18 and runs until October 3.

The items in the exhibit range from anonymous 19th century anti-Semitic images like The Wandering Jew, to bourgeois advertisements for a pharmacist’s shop and a cigar manufacturer.

As the posters progress, an art nouveau elegance gives way to a more modernist verve. An image announcing the First World Congress of Jewish Students in Antwerp in 1924 exudes an energy akin to classic 1920’s French posters advertising aperitifs and six-day bicycle races.

Such exuberance unfortunately did not last, and soon anti-Semitic imagery again become rife in Nazi-occupied Belgium. Moreover, the postwar works included in “Public Notice” suggest that Belgian Jewish artists never fully recovered their bold creativity. “Never Again,” a desperately tragic poster circa 1960, was created in response to a 1959 upswing in neo-Nazi aggressions across Europe. Despite its title, it was clear that in terms of anti-Semitic violence, “Yes, Again” was a more accurate slogan.

There were some postwar attempts at festivity, however, like a 1968 Antwerp concert by the popular Israeli singer Rika Zarai, who made records in both Hebrew and French. There were also profound Yiddish cultural achievements, like Belgian writer-director Samy Szlingerbaum’s 1980 film “Brussels Transit,” about a Polish Jewish family moving to Belgium.

Still, there is something fragile about many of the more recent posters. A 1988 advertisement for a performance by Gino Cohen’s orchestra shows a lady whom the catalogue authors liken to a rambunctious Toulouse-Lautrec character, but in truth she is closer to the ethereal, wispy drawings of Aubrey Beardsley, as if illustrating the precariousness of Belgian Jewish life.

Only the most recent image in the exhibit contradicts this trend, a 2006 visual plea in support of Israeli hostage Gilad Shalit, who remains a captive of Hamas. Even if posters cannot change history, they do remind us of our ideals.