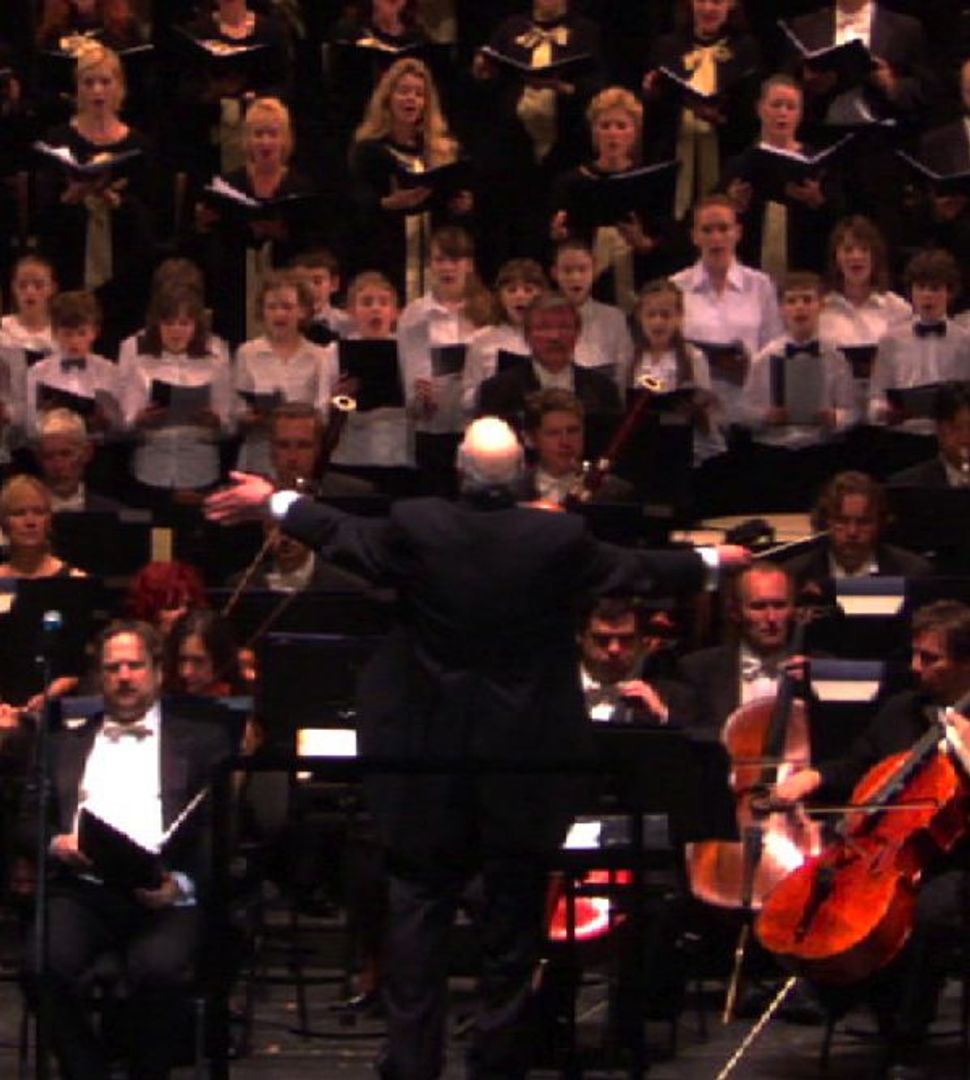 Charles Fox conducting his Oratorio, ?Lament and Prayer? with the Polish National Opera Company, Chorus and Orchestra at the Warsaw Opera House, June 30. 2009.

The tensions in that relationship will be laid bare when Fox conducts a chamber orchestra on August 21 in the city of Gdansk, to mark the 200th anniversary of Chopin’s birth.

“A lot of people have a very complex relationship with Poland,” Fox said during an interview at his home studio in Los Angeles. “They consider it the cemetery of the Jews.”

Fox’s father was born in the town of Szydłowiec and fled to Palestine in 1920 to avoid being drafted into the Polish army. He never saw his family again. Last year while touring Poland with 70 cantors and a documentary film crew in tow, Fox visited his father’s village.

“There’s no visible sign that a Jew ever lived there except for a pub that has a Jewish star on it,” he said. Despite the fact that the town has had no Jews living there since World War II, the mayor received Fox with open arms.

“I was welcomed like a native son,” he recalled. Now he plans on converting the pub into a museum to commemorate the Jewish community that once lived there. “I’ll be visiting with the Mayor when I return to Poland. He wants to help with the museum.”

Commissioned by the Polish government to compose a piece celebrating Chopin’s bicentennial, Fox was still completing the oeuvre, titled “Fantasie (Hommage à Chopin),” when we met at his studio. The orchestra performing the piece in Gdansk will feature Polish pianist Leszek Możdżer and American clarinetist Eddie Daniels. Upwards of 16,000 people are expected to attend.

Fox left his native Bronx in 1959 to study composition in Paris for two years with Nadia Boulanger. He says the French instructor changed his life.

“I owe everything to Madame Boulanger,” Fox said, grabbing a black and white photo of the bespectacled, coiffed teacher from a bookshelf. “Every time I play music, I still hear her voice in my ear.”

When he returned to New York in 1961, Fox jumped into Latin music, gigging along the Borscht Belt circuit. He worked under Tito Puente, Ray Barretto, and other heavyweights of the New York Latin scene.

In 1967, Fox scored the film adaptation of Philip Roth’s “Goodbye, Columbus,” a job that brought him to Los Angeles, where he stayed permanently. Later, the publishing house BMI introduced him to his now longtime collaborator and lyricist Norman Gimbel. Together they penned the legendary track “Killing Me Softly,” as well as the theme songs to cheeky 1970s sitcoms. In the ensuing decades Fox won Emmy and Grammy awards and picked up two Academy Award nominations. Fox’s entire musical life will be unfolded in his forthcoming memoir, “Killing me Softly: My Life in Music” (The Scarecrow Press), which will be published in September.

As the years skipped by, Fox felt increasingly compelled to return to classical music. Now, with only a few days before the concert in Gdansk, Fox is composing his heart out, putting the final touches on the Chopin homage. “I recognize the tragic past,” he said. “But right now, I’m only concerned with finishing the piece.”

Watch a segment about Charles Fox on TV Land: