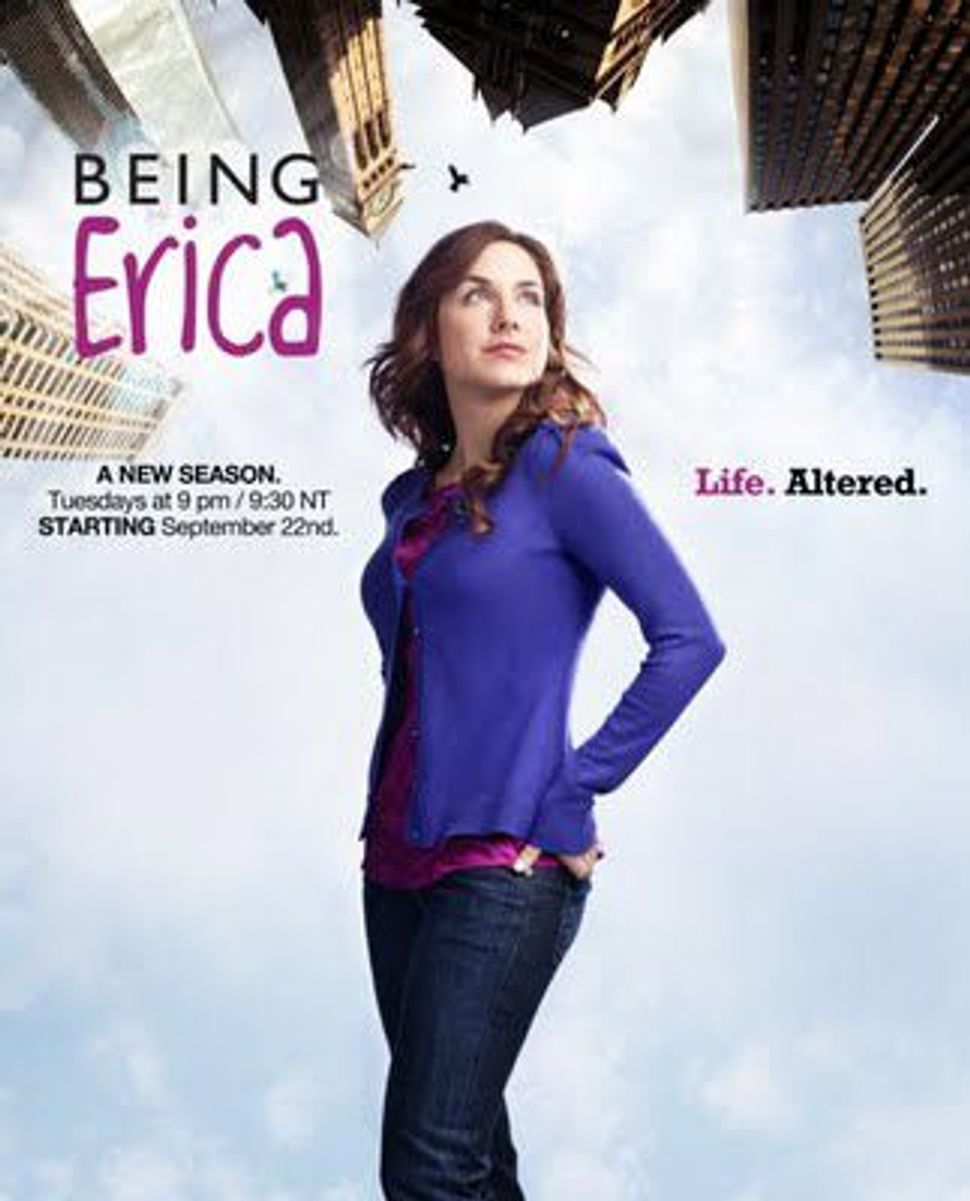 Erica Strange, like many of us, sees her therapist regularly — only hers helps her work through her problems by sending her to the past, the future and even to alternate existences. Our shrinks can’t pull off tricks like that, and we’re certainly not getting the same bang for our buck that Erica is. In fact, she never gets a bill for her sessions with the mysterious Dr. Tom.

Erica Strange is the protagonist of the hit Canadian TV series “Being Erica,” set to launch its third season on September 22. Although she inhabits a world of magical time-traveling psychotherapy, Erica — Jewish and in her early 30s — has gained a very real following because she seems so, well, real.

TV watchers have related to Erica (played by Erin Karpluk) from the show’s debut episode in 2008, when they met her going nowhere professionally and personally, wracked by regret, and dealing with a serious guilt trip laid on her by her family. “I’m suffocating under the weight of your collective disapproval,” Erica cries.

In a calculated move to make the show, which is set in Toronto, universally appealing, its creator and executive director, Jana Sinyor, made its characters as specific as possible. For Sinyor, a Jewish woman roughly the same age as Erica, it was important for the Stranges to be Jewish. “Everyone comes from somewhere. Everyone has a background, and I knew that because of who I am, I could make Erica’s Jewishness very realistic,” she explained. Sinyor deliberately made Erica’s father Gary a second-career rabbi to enable her, as one of the show’s writers, to explore Jewish religious and cultural issues more fully.

Sinyor reports that non-Jewish viewers are enjoying the Jewish aspect of the show, while the response among its Jewish audience has been mixed. Leah Strigler, a New York-based Jewish educator, loves how Judaism is treated “very normally. I find it refreshing to have a show about Jewish identity where it’s woven naturally into the storyline, and not presented stereotypically or as slapstick, as is often seen on American TV,” she said. She cites the example of Erica’s fainting while in the role of sandek at a brit milah ceremony. “It’s not played for humor, but rather illustrates her ambiguous and conflicted feelings about circumcision.”

It is unquestionably the inclusion of hot-button Jewish topics like interfaith dating and marriage and opposition to circumcision that has led some viewers to be less enthusiastic. While Rabbi Erin Polonsky of Toronto’s Temple Sinai likes how the Stranges — who freely use terms like shul and mohel, and talk about waiting to eat until sundown after Yom Kippur and chanting Torah at a bat mitzvah — sound like the Jews she serves at her Temple, she finds that some elements of the show ring too liberal in the context of the Canadian Jewish community.

The third season of “Being Erica” will air on SoapNet in the U.S. and in 85 other countries via BBC Worldwide distribution. Sinyor assures audiences that Jewish life will continue to play a role in the series. Careful not to reveal an important plot point, Sinyor nonetheless promises, “There will be some interesting developments related to Judaism in the show as a whole — and not necessarily just for Erica.”