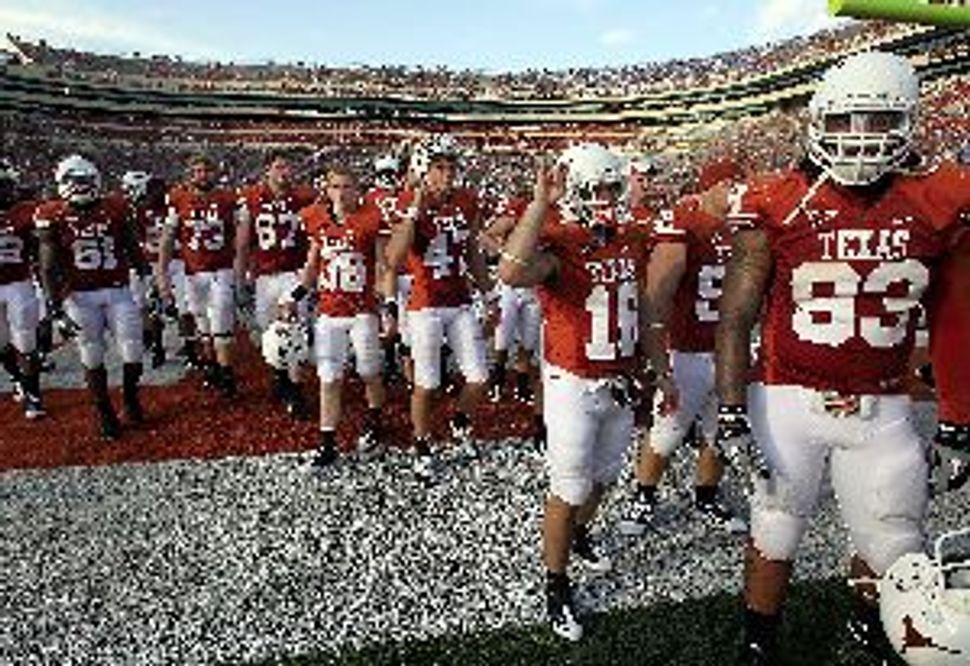 Like it or not, college football has narrow associations: over-glorified, over-worked “student”-athletes; a byzantine and highly controversial championship system, otherwise known as the Bowl Championship Series; and boozing. Lots of boozing.

So in the event a game happens to fall on, say, Yom Kippur, some students might be caught in a bind. Said event is scheduled to happen on October 8, 2011, when the University of Texas and the University of Oklahoma, longstanding rivals, will play on the Day of Atonement.

But not if UT’s student government can help it. After at least 1,200 people signed an online petition calling for the date of the game to be changed, the government “voted unanimously this week to call for rescheduling the Texas-Oklahoma game,” reported the Austin American-Statesman newspaper.

According to a UT spokesman, a change is unlikely. “We understand and we are sympathetic for our fans and our staff,” Nick Voinis said in the article. “It was not done intentionally, but there’s really no alternative.”

There are more than 4,000 Jewish undergraduates at UT.

The game has been played on Yom Kippur before. Still, the conflict irked one junior, whose name, Jordan Bagel, deserves a mention. “It’s a day of fasting and atonement and self-reflection,” he told the paper. “And the Texas-OU game is not just a game. It’s a weekend event. There’s the trip to Dallas. There’s the State Fair.”

Okay, fine, the first few things are important. But if a primary concern is missing the entire weekend, which presumably includes an unhealthy dose of partying, then you have to wonder what students’ motives are on this one.