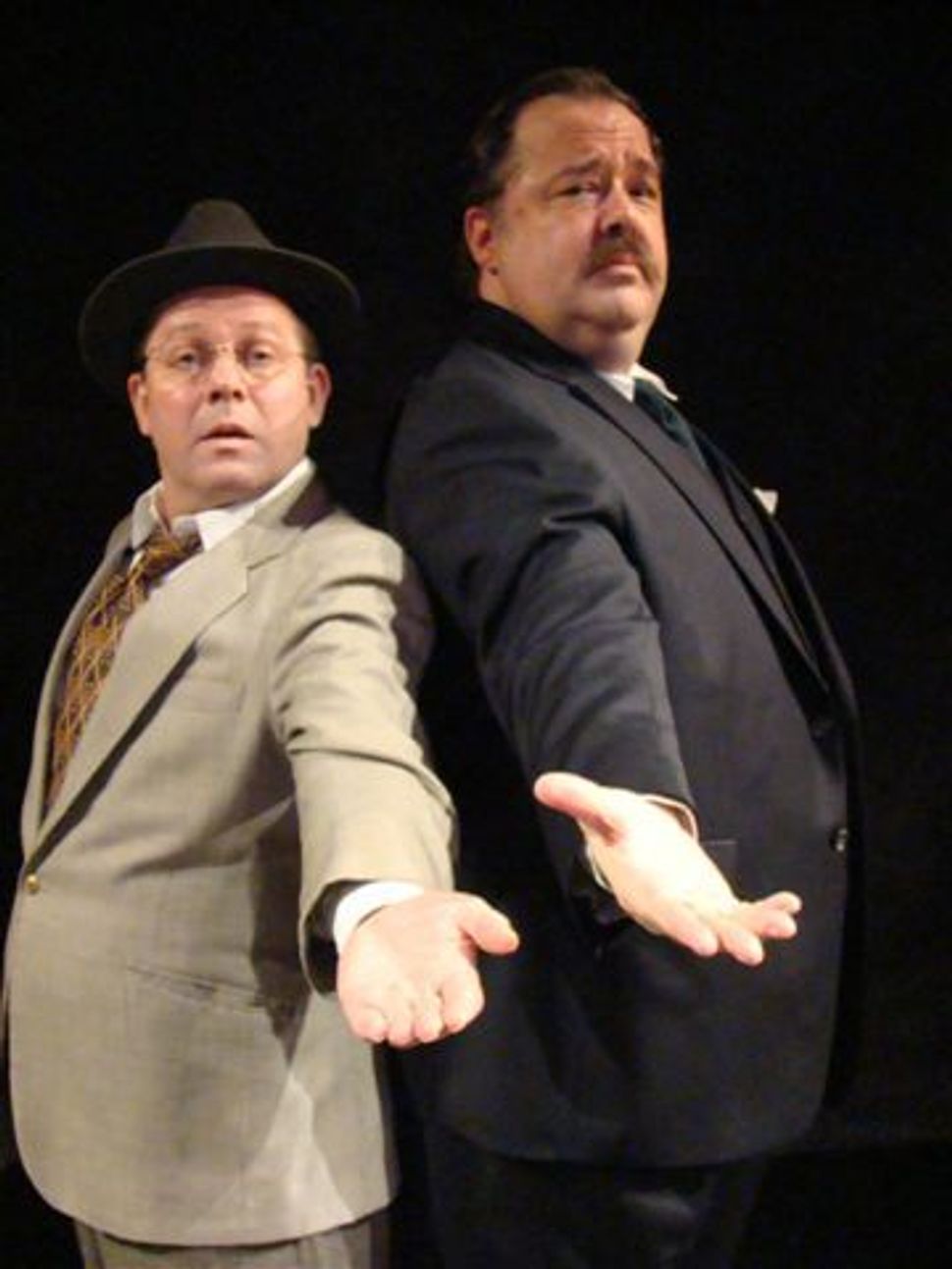 Michael Schilke as a newspaper editor and Paul J. Malamphy as Mr. Mister in ?The Cradle Will Rock.? Image by Nathaniel A. Siegel

The story of “The Cradle Will Rock,” which kicked off New York’s Howl! Arts Project earlier this month at Theatre 80, and returns for two final performances tonight and tomorrow night, gives Stravinsky’s riot a run for its money.

In the summer of 1937, Orson Welles and his creative team were all set for the opening of a new musical by Marc Blitzstein, an anti-capitalist allegory about civic corruption and corporate greed. Finding themselves locked out of their original theater by order of the federal government, without sets, lights, or an orchestra, Welles and company rented a new theater and a piano, intending for Blitzstein to read the libretto and sing the songs himself, alone on a bare stage. As he began, the show’s cast members, who had been prohibited by Actors’ Equity from performing “onstage,” stood up in the audience and played their parts from their seats. It’s the sort of tale that theater die-hards hold up as an example of the “possibilities of live performance.”

Honoring that famed, bare-bones original presentation, Theatre 80’s earnest, appealingly game production of “The Cradle Will Rock,” directed by Larry Marshall, is mounted with no sets and minimal costuming. Set in Steeltown, U.S.A., “Cradle” opens with a streetwalker (Laura Wolfe), being taken to night court by police, where a group of men dubbed the Liberty Committee is also being held.

The Liberty Committee, (mission statement: “to combat socialism, communism, radicalism, and especially unionism!”) is made up of Steeltown’s most prominent citizens: the clergyman, the newspaper editor, university professors, artists, and even the town physician, all appointed by Mr. Mister (Paul J. Malamphy), resident steel tycoon and ruthless capitalist. As the musical’s 10 scenes unfold (each introduced, in a charming touch, by pianist and music director Mimi Stern-Wolfe), we learn how Mr. Mister bends the entire town to his interests, with the chief aim of quelling the workers’ unions: The newspaper prints the stories he wants printed; the clergyman’s sermons advocate war so that the price of steel will go up; the doctor lies and testifies that a worker injured in Mr. Mister’s unsafe factory had been drinking.

Written in the throes of the Great Depression, “Cradle’s” satire certainly resonates in today’s economic climate, though some scenes hold up better than others. At its best, the show is eerily prescient: The highlight of the night is a vignette in which Mr. Mister auditions university professors to give a speech convincing students to take a military training course. The winning presentation, from Professor Trixie (the hilariously belligerent Greg Senf), is just a series of buzzwords: “Army! Power! Women!” he barks, to Mr. Mister’s delight. It’s like Blitzstein saw Twitter coming.

The somewhat uneven cast is buoyed by a few very capable performances. Juggling numerous parts, Brian Henry is a standout, especially as Mr. Mister’s dolt of a son, Junior Mister. “Cradle” would be nothing without a properly menacing, despicable Mr. Mister, and Malamphy rises to the occasion. Darcy Dunn is charismatically squirm-inducing as the conniving Mrs. Mister, and Gavin Esham had me laughing through most of his supporting work, particularly a thoroughly weird take on the timid professor Mamie.

Some of the directorial decisions were questionable, however. A few of the performers were on book, which was fine until they were required to dance. Furthermore, in the midst of all this working class, revolutionary spirit, I had trouble justifying the decision to make audience members pay $20 for a performance where books are anywhere near the stage. Still, when the cast came out for their curtain call, chanting, “the cradle will ROCK!!” over the score’s final bars, I found myself whooping and pumping my fist right along with them.