Do Jewish Lawyers Really Do It Better? 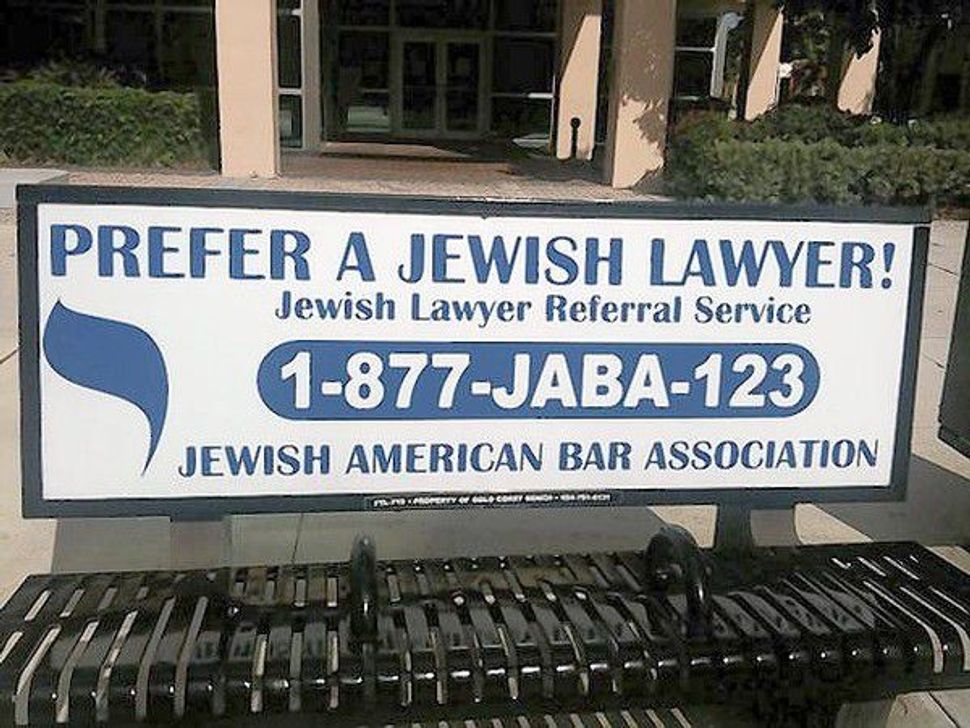 On a bench near the Broward County Courthouse in South Florida, a blue and white sign exclaimed “Prefer a Jewish lawyer!” and offered a phone number people could call to reach the Jewish American Bar Association, a Jewish lawyer referral service founded by social worker Lisa Spitzer and based in Boca Raton. The controversial advertisement has raised flags in both the legal and Jewish communities. Are Jewish lawyers better? Or is this a case of stereotype and financial opportunity?

“I felt it played on certain stereotypes of Jews,” Fort Lauderdale attorney David Shulman told the Sun-Sentinel. “I know a lot of lawyers both Jewish and non-Jewish and some are good and some are bad. I don’t think using someone’s ethnicity is fair to determine whether they are a good or a bad lawyer.”

Soon after Shulman complained about the ad on his blog, it disappeared from the bench, replaced with an ad for the AAA Attorney Referral Service, Inc. But some worry the damage is already done. Richard Sachs, a litigator and the president of the B’nai B’rith Justice Unit of Broward County, a group of roughly 200 Jewish lawyers and attorneys, told the Sun-Sentinel that JABA “implies a Jewish attorney is better than a non-Jewish attorney, and that can’t help the legal community at large.” There are also concerns that JABA, which has three members to date, is trying to pass as a national organization, not a referral service founded by a social worker.

Spitzer opposes the opposition. “If an all-women’s medical group posted an ad ‘Prefer a woman gynecologist?’ would that be offensive?”

Do Jewish Lawyers Really Do It Better?