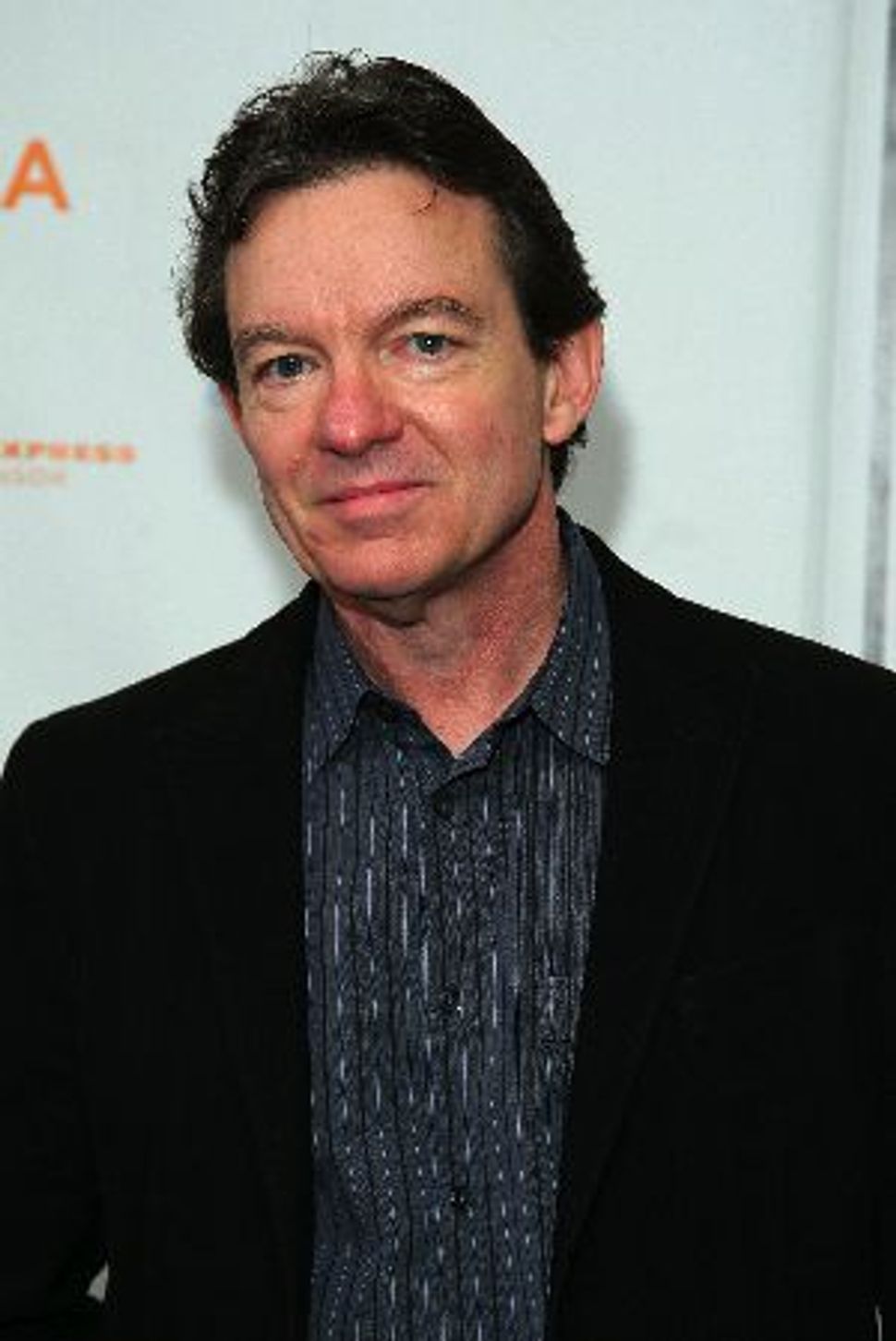 Lawrence Wright at the premier of ?My Trip to Al Qaeda.? Image by Getty Images

Zohar Tirosh-Polk: How did this play come about?

Lawrence Wright: I had a done a one-man play before, “My Trip to Al Qaeda.” That was anomalous to start with, and I thought I would never do that again. Then I went to Gaza for The New Yorker in July 2009, and when I came back Karen Greenberg at the Center on Law and Security asked me to give a speech about Gaza. The more I thought about it, I realized it was very familiar to the people of that region, but here people are so unacquainted with it. I thought maybe I would try another one-man presentation, so we assembled all this video and we did a reading last December at the 3-Legged Dog theater, and it was during that time that Oskar Eustis at the Public got interested.

Oh I love it! [Laughs] I’m crazy about him, he’s a great director for me. First of all, what we’ve mainly done up until now is dramaturgy, and I don’t care what you call it, it’s the same thing as editing. As a writer I’m familiar with this process, I’ve worked with editors my entire career, and he’s a great one. So I feel very comfortable in that relationship. Now we start the ‘moving me around the stage’ stuff, you know the acting portion of this event…

And how is that going?

A little lonely, I’m beginning to wonder why I don’t write more characters. [Laughs] To be serious about it, it’s another form of reporting.

Is the play in its current form based on the New Yorker article “Captives”?

Yes. When I was in Israel and Gaza, I was very intrigued by the tragic story of the Israeli soldier, Gilad Shalit, who was abducted in June 2006. I had not been aware of the fact that his capture had been such a significant event in bringing on the war and the blockade. That the abduction of a single person could have such a catastrophic response was interesting to me. For instance, there’s been an American soldier, Bowe Bergdahl, who was captured by the Taliban in June 2009 and nobody ever talks about him at all. And yet in Israel, the longing to get Gilad Shalit back is so prevalent that I really began to wonder what he meant to that society. When they started talking about exchange, the disparity between one Israeli soldier and 1400 prisoners got me wondering about the scale of human lives, and that’s the theme of this play.

You also talk about a strange obsession that the Palestinians in Gaza have with Gilad Shalit, is that true?

There’s a strange sense of identification. First of all, there are many, around 8,000 Palestinians being held, many without charge, and they are also cut off from any kind of family…but Gazans themselves feel captive. They look at Gilad Shalit as a symbol of their own suffering, so each side has this strange claim on this one lonely boy.

What’s your view of Hamas after your trip? Has it changed in any way?

Hamas is a different kind of organization than Al Qaeda. Hamas is at once a terrorist organization and a government entity. It actually runs the government in the Gaza Strip and is in charge of cleaning the streets and negotiating with its neighbors. The odd thing about it, considering it’s a terrorist organization, is that it’s also responsible for keeping much more radical elements inside Gaza at bay. So, I think it’s an evolving political entity. The fact that its political leadership is based in Damascus and the actual political functioning of it is located in Gaza creates a rift inside that structure that makes it very difficult to resolve certain kinds of political issues. I think Hamas has to be engaged. I think it’s pointless to try to make peace without trying to bring Hamas into the equation.

What are your thoughts about this current round of peace talks?

I think it’s better to have talks than not to. But if you’re going to have peace talks you have to talk to people that are your enemies, and in this case neither Israel nor Fatah have chosen to involve Hamas, which I think is going to be the key to any real peace or solution in this region.

With regards to your play, is there a goal in mind, or something you hope to achieve?

People have such settled views about the Israeli-Palestinian conflict, almost everyone I’ve talked to has a position. So I’m addressing these kind of hardened stances that you find on either side, to try to widen the scope of their understanding and to see the humanity of the other side. This is a problem that has gone on way too long, and it’s a very dangerous situation, not only for the people in the region, but for America, which has a large stake in making sure this problem is eventually resolved. One of the problems that has kept this peace from being realized is that people have frozen into place, their attitudes and their sense of what is possible. And I’m trying to loosen, trying to thaw those attitudes by showing people what it’s like to live on the other side of the fence. So, whether your sentiments are with the Gazans or the Israelis, you’ll be able to see how each side came to the position that it stands in now.

Is performing challenging for you physically, does it change your daily routine?

It is challenging, I’m not a professional actor. One of the things I’ve discovered from my previous experience is that I thought: “What a terrific gig for a writer,” I can work all day then go to the theater for a couple of hours and then go out to dinner. The truth is, I couldn’t. I was unable to write at all during that period. My creative energy was all focused on those two hours in the evening and I couldn’t get anything done. It was really frustrating to me. And I’m mainly a writer. I’ve decided I didn’t want to take that play to university campuses and go all around the country. It’s just not who I am. I do want to do this for as long as I feel like it’s useful in places I think it’s useful. We’re thinking of taking this to Israel, for instance, and if we get to Israel I’d like to get it in Jenin Theatre and maybe into Gaza if there’s a place for it.

Will there be another movie?

I don’t know. I’d love for that to happen. The first thing is to get it up on stage. The thing about the Middle East is that “events are always happening but nothing ever changes.” So, in a way, I feel like this is very temporal. It’s a play of this moment right now. In that sense I don’t know what it would be like if we made a movie of it and it came out in a year and a half. I don’t know how things might have changed and I would love for them to change for the better, but it’s also possible that nothing will change. This play is an act of hope to try and push things forward a little bit further.