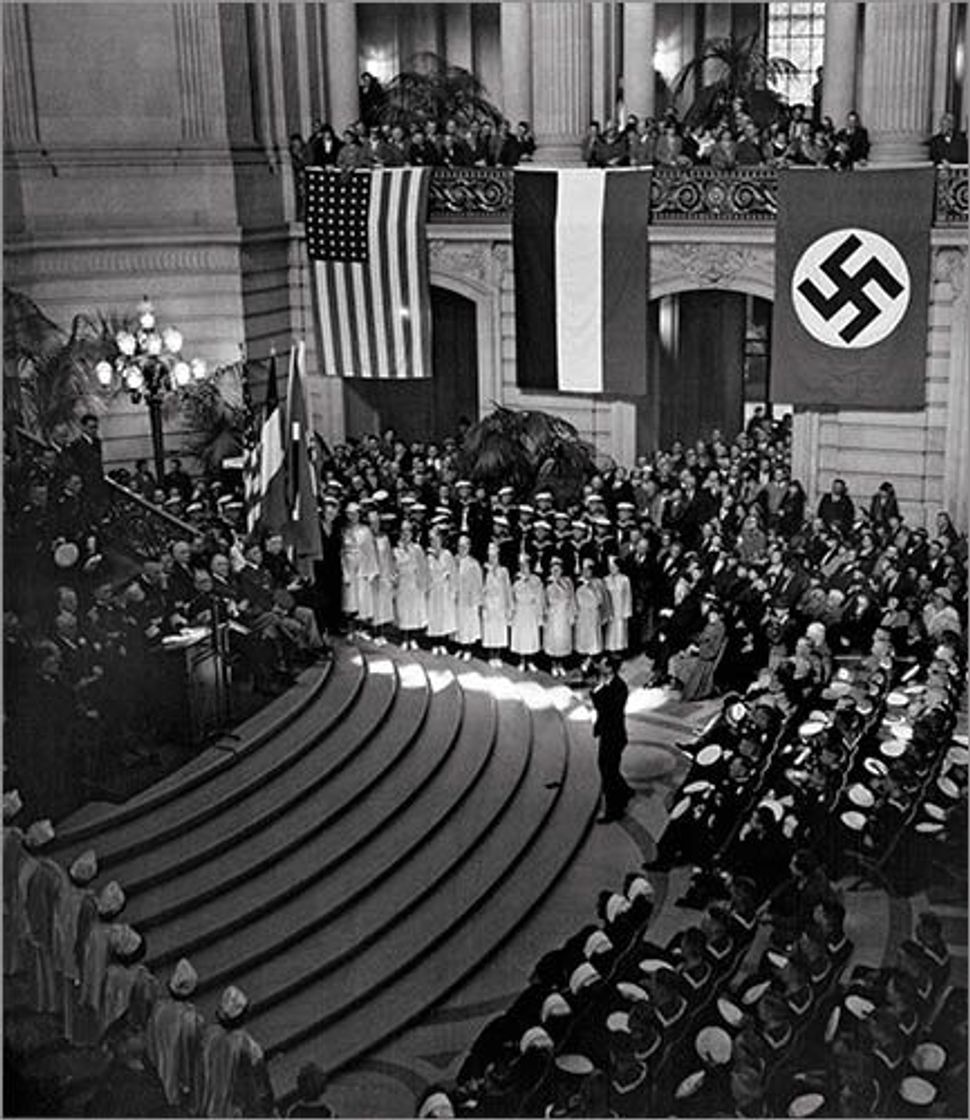 The title of a current exhibition of works by the late German Jewish American photographer John Gutmann, “An Emigrant’s Visual Discovery of a New World,” says it all. An immigrant to the United States, Gutmann brought to the striking black and white images he created the eye and sensibility, not only of a foreigner, but also of a refugee.

Arranged along the walls of San Francisco’s BJE Jewish Community Library (JCL) are 32 photographs by Gutmann, plus a selection of his paintings and memorabilia. All are on loan from the John Gutmann Fellowship Trust of the San Francisco Foundation, to which the photographer left his archives upon his death in 1998.

Born in Breslau, Germany to a prosperous Jewish family in 1905, Gutmann studied painting at the regional Academy of Arts and Crafts. In an attempt to further his career he moved to Berlin in 1927, where he taught art, pursued a masters degree, and honed an expressionist style. When the Professional Service Restoration Act denied employment to non-Aryans in April 1933, Gutmann saw the writing on the wall and decided to emigrate.

Watch a slideshow of photographs by John Gutmann:

While some of his family members set their sites on New York, Gutmann followed the advice of friends and tried to find a way to reach San Francisco. In an act that can be characterized only as chutzpadik, he bought a new Rolleiflex camera, took three test rolls of film, sauntered into the Presse-Photo agency, and convinced them to send him on assignment to the United States. He was 28 years old and, prior to his recent purchase, has never held a camera in his hand.

On display at JCL are examples of Gutmann’s work from the first years following his arrival in San Francisco. Completely taken by the informality of American life and the fact that “the sun shines and nobody disapproves of my nose,” Gutmann voraciously documented his adopted city and its environs. He focused on developing his self-taught style while working to support himself by offering his photos to both German and American publications.

The American love affair with the automobile intrigued Gutmann, and garish and bizarre sights that might have been eyesores for many Americans were visual wonders to him. “The bad taste in this country was sometimes so bad that it was great,” he is known to have said. Whether perched above the city in his apartment studio, roaming the streets of San Francisco, or traveling country byways in other parts of the nation, he drank in and reflected back the diversity, freedom and possibility that America represented for him.

Although Gutmann garnered some attention for his work and participated in a few shows in San Francisco and New York in the 1930s and 1940s, he turned his attention in 1936 to teaching at San Francisco State College, where he founded its creative photography program a decade later. His teaching career was put on hold in 1942, when, at the age of 37, Gutmann enlisted with the American Armed Forces and served in China, Burma and India as part of the Office of War Information, producing both films and photographs.

It wasn’t until Gutmann’s retirement from teaching in 1973 that his name resurfaced in the art and museum world, when he began to organize, title and show his Depression-era photographs, as well as experiment with new photographic techniques and composition styles.

While Bay Area residents have the opportunity to see some of Gutmann’s best work at the JCL, the rest of us can learn more about this little-known, yet seminal figure in 20th century photography by viewing Jane Levy Reed’s 2006 documentary film, “My Eyes Were Fresh: The Life and Photographs of John Gutmann,” or by reading Sally Stein’s book, “John Gutmann: The Photographer at Work” (Center for Creative Photography, 2009).