Rangers’ Jewish GM Is Conquering the Major Leagues, But Not as a Batter 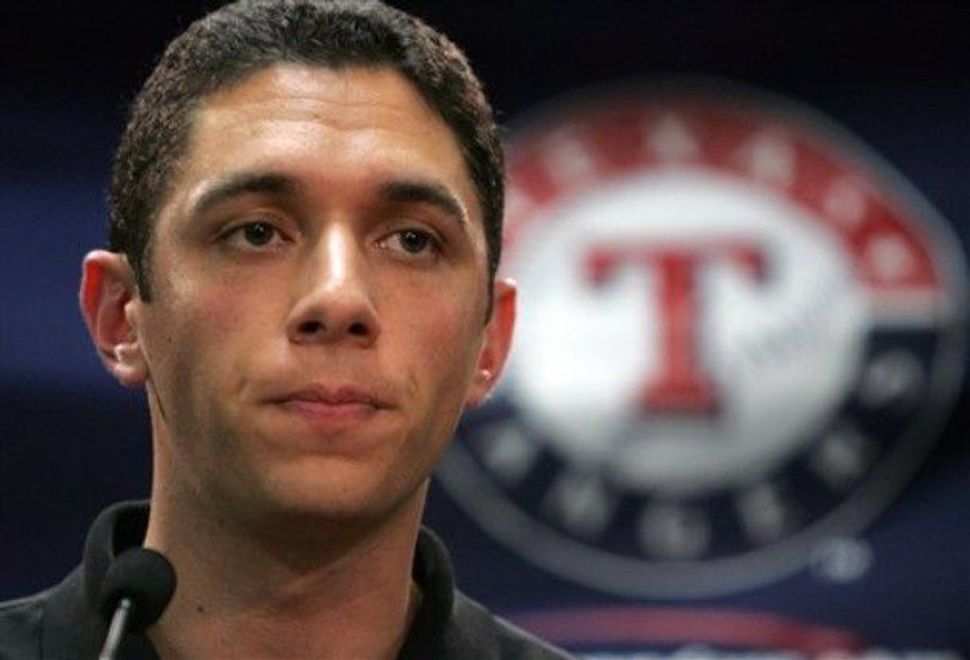 But he has conquered the Major Leagues as a front-office wiz kid. In 2005, at age 28, he took over the wheeling-and-dealing of the Rangers to become the youngest general manager in history. Five years later, the Rangers are appearing in the American League Championship Series for the first time, playing the New York Yankees starting tonight for the right to advance to the World Series.

Not bad for a stats nerd whose first job after graduating from Cornell University in 1999 was as a corporate drone for Allied Domecq, the parent company of Baskin-Robbins and Dunkin’ Donuts. Daniels determined that he didn’t want his life to be full of crullers, so he took a $275 week internship with the Colorado Rockies. That led to a gig as a baseball-operations assistant to then-Texas Rangers GM John Hart. Daniels ascended to assistant general manager in 2004 and took over as general manager, the macher who makes the personnel decisions in juggling multimillion-dollar salaries, when Hart retired.

Daniels joins a short list of Jewish baseball executives who have made a huge impact at an age when many peers are still figuring out how to repay college loans. In 2002 Theo Epstein, also 28, became GM of the Boston Red Sox, guiding them to World Series titles in 2004 and 2007.

Daniels hasn’t reached the pinnacle yet. He absorbed criticism at first for releasing talent that later blossomed. But nobody is questioning his moves now. The Rangers are in the postseason for the first time in 11 years and won their first playoff series ever. Daniels traded high-priced players for developing stars. He acquired veterans with iffy personal histories who flourished. He revamped the scouting system. He stuck by manager Ron Washington when he tested positive for cocaine in the offseason. The haimish lad is a prime candidate to be named the majors’ Executive of the Year. Sure beats doughnuts. “I just couldn’t see how someone with no ability — me — could wind up heading an organization,” he said to Fast Company.

Rumors swirled that the woebegone Mets would lure Daniels back home to become GM, but Daniels said he wasn’t interested. “I’m friends with a couple of other guys who’ve been interviewing [with the Mets],” he told ESPN.com. “So I texted them and told them if they want to go over for some meatloaf after their interviews, my mom would love to have them.”

Rangers’ Jewish GM Is Conquering the Major Leagues, But Not as a Batter