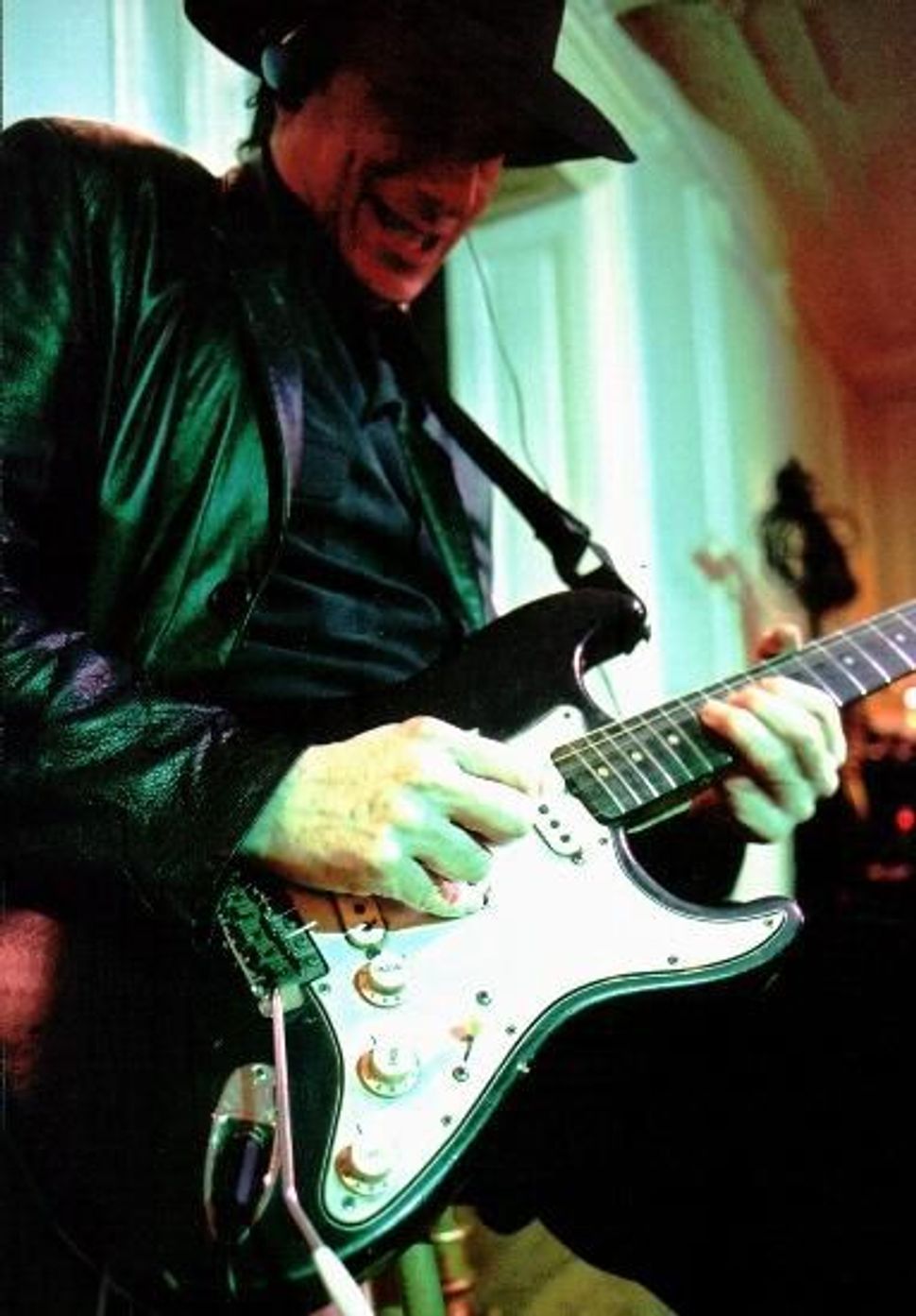 Over the past 30 years, Lucas has collaborated with everyone from Iggy Pop, Patti Smith, and Nick Cave to Bob Weir, Lou Reed, Allen Ginsberg and, perhaps most famously, avant-bluesman Captain Beefheart. His music runs the stylistic gamut from blues to country to jazz to classical. (“Each to his own taste. And I’ve got very catholic taste, in the small ‘c’ sense of the word.”) He’s been called “the thinking man’s guitar hero” by The New Yorker and “the greatest living guitar player” by cognitive psychologist and record producer Dan Levitan. In the last year alone, Lucas has performed in China, Europe, Cuba, Croatia, the Canary Islands, and all across the United States, in support of one or another of his seemingly endless array of musical projects.

Now Lucas is back at his home base in New York City, preparing for two different shows this weekend, encapsulating two different aspects of his musical menagerie. On Friday, Lucas will perform a solo acoustic set at Roulette, and on Saturday he will be playing a CMJ showcase at the Bowery Poetry Club with Gods and Monsters, a band featuring a rotating cast of post-punkers who have played with Jonathan Richman, The Talking Heads, Television, and many others.

Since the early 1990s, Gods and Monsters has served as one of Lucas’s more steady gigs: a port in the storm where he gathers his musical ideas, performs and jams in the company of like-minded outsiders. Though Lucas has always been proud of his Jewish heritage, the latest Gods and Monsters project exhibits a markedly Semitic slant. Though it won’t see release until spring of next year, Gods and Monsters’ latest album is tentatively titled “The Ordeal of Civility,” named after sociologist John Murray Cuddihy’s 1978 text on how Jewish intellectuals like Freud, Marx and Lévi-Strauss helped develop narratives for the awkward adjustment to modernity of the late nineteenth and early twentieth centuries. As Lucas puts it, “his thesis is that they created these systems that shook the world and changed the way people thought because, as Jews, they were not able to assimilate into gentile, polite society.”

It’s an idea that appeals to Lucas, who considers himself very much an foreigner even in the Pale of the New York music scene he’s been working in for 20-plus years. “I’m an outsider, in the Groucho-sense,” Lucas laughs. “I would never join a club that would have me as a member. But [Gods and Monsters] is a real good mingling of outsider musicians, in the form of a psychedelic super-group.” Mining his heritage for more than just Groucho jokes, Gods and Monsters latest album is also set to include “Jedwabne,” Lucas’ musical tribute to relatives who lost their lives in the Jedwabne pogrom of 1941. In July of 2001, when Polish president Aleksander Kwaśniewski issued an official apology to the families of those affected by the pogrom, Lucas was flown to Jedwabne as an emissary representing his ancestors. “I thought it was a really moving, wonderful thing,” he said.

As for Friday evening’s solo show at Roulette, titled “I Cover the Waterfront,” Lucas promises an evening of music that will be no less eclectic just because he’s playing alone. “I’m drawing on a well of 500-plus originals and covers: everything from Jewish music to Chinese pop music from the ‘30s to Wagner and country-blues,” he said. “I call it ‘I Cover the Waterfront’ because that describes my all-encompassing, voracious love of music.”

Despite his renown as an electric guitar player of astonishing inventiveness and technical proficiency, Lucas has a soft spot for his acoustic, which is precisely why “I Cover the Waterfront” serves as a showcase for his (itself not at all unremarkable) acoustic output. When approached by Roulette to organize a show, he immediately thought of doing a more stripped-down acoustic set. “That was my first instrument,” he said. “If I had to choose a guitar to bring out to a desert island if I was abandoned, it would be my acoustic, if only because there wouldn’t be an extension cord long enough to extend back to the mainland.”

That Lucas can move so effortlessly between his acoustic catalogue and a more collaborative, experimental Gods and Monsters jam in the course of a weekend is proof of his extraordinary range, and his tireless work ethic. Besides working on “The Ordeal of Civility,” Lucas recently completed a score for a 1931 Spanish-language “Dracula” film, which he performed at the recent New York Film Festival, and which provides a nice complement to the live score for the early German expressionist film “The Golem” that he has been performing since 1989, a project which stemmed from his lifelong fascination with old-school horror movies. “When I was a little boy, I loved horror films,” he said. “And ‘The Golem’ is the Jewish Frankenstein. How cool is that? A Jewish Frankenstein’s monster that springs forth from cabbalistic magic? I love that film because it shows Jews as powerful magicians. Which we are! [Laughs]”

And though he’s kidding, a mastery of cabbalistic magicks may explain Gary Lucas’s almost supernatural capacity to multitask.

Watch Gods and Monsters play in Moscow in 2006: