A Gadget for Gods and Days 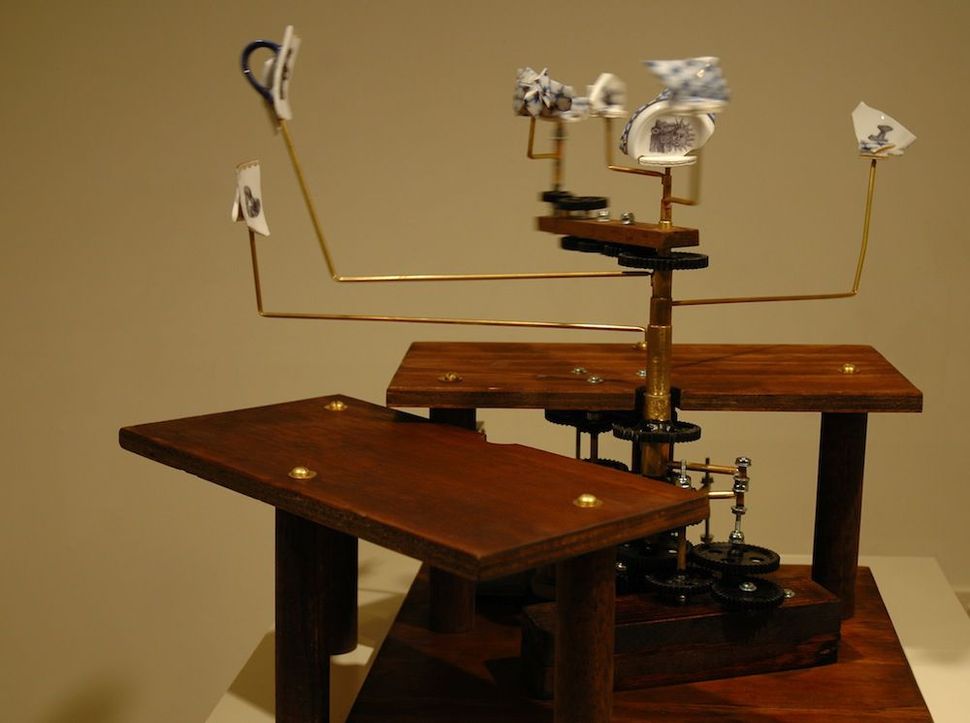 Though about half of the 16 artists in the current show at the Sixth and I Historic Synagogue in Washington, D.C., are Jewish, curators Eloise Corr Danch and David Zuckerman unabashedly admit there is nothing Jewish about the exhibit, beyond the Jewish venue. 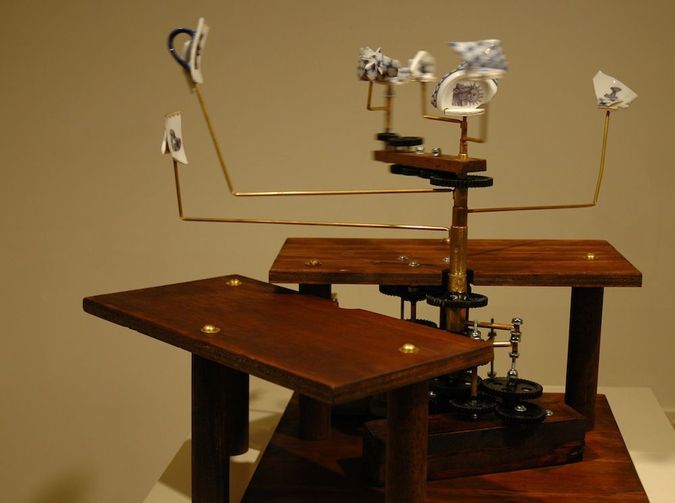 In the catalog to “I’ve Gone Looking for that Feeling Everywhere: An Exhibition of Emerging Artists,” which hangs through Nov. 2, the curators identify “an insistent urge to examine and discover” as a thematic tie-that-binds.

“This exhibition celebrates the idea of art as the product of (or byproduct) of that curiosity, of the artists’ need to engage their surroundings and indulge their fascinations,” they write, insisting the art is “visceral, emotional, curious, playful,” rather than “steeped in concept or theory.”

In fact, not only do the curators say there isn’t even anything Jewish, or even spiritual, about the works in the show — though they refer in their statement to “the restless yearning spirit that drives the action” — but the title derives from a Denis Johnson novel, “Jesus’ Son,” about a drifter.

But Sam Zuckerman, David’s cousin, says his contribution to the show — which is in fact the first work of art he has ever made — has at least a partial Jewish component.

Zuckerman’s work, “Tiws Day,” is an orrery, a mechanical model of the movement of solar bodies, which Zuckerman says date back to the 17th or 18th century. Zuckerman focused on the planets and moons visible to the naked eye and mapped them out over the seven days of the week, particularly noting the mythological and religious origins of the days’ names. Each day is represented by a piece of a broken teapot, upon which Zuckerman added a symbol through a process that involved Photoshop and decal paper, essentially a sophisticated sticker.

Sunday shows the sun, and Monday is based on the moon. Tuesday is Tiw’s Day, or the day of a Nordic god associated with combat, for which the orrery takes its name. Wednesday is Wodin’s (or Odin’s) day, which Zuckerman illustrates with Oden’s emblem, crows, and Thursday is Thor’s day, which Zuckerman depicts with a hammer. Friday is the love goddess Frijjo, and Saturday is associated with Saturn, which features a reproduction of Goya’s Saturn Devouring His Son in the orrery.

The orrery is a masterful work of machinery, which Zuckerman researched on YouTube, and the artist lost the attention of a reporter explaining how the dozens of gears work, and how the number of teeth in a gear corresponds to its speed. Asked if he anticipated the sounds some of the tea pot shards made when they touched each other at regular intervals, Zuckerman said he rather enjoyed the unforeseen “clinks.”

Asked what it meant for his piece to appear at Sixth and I, Zuckerman said, “For me, it wasn’t so much about being in a synagogue.” But that does not mean he doesn’t think his orrery might have something specific to say to certain people of faith. “There are a lot of people who think Halloween is a satanic day,” he said. “And yet they say ‘Thor’s Day’ or ‘Wodin’s Day.’”

Watch a video of the orrery;

A Gadget for Gods and Days