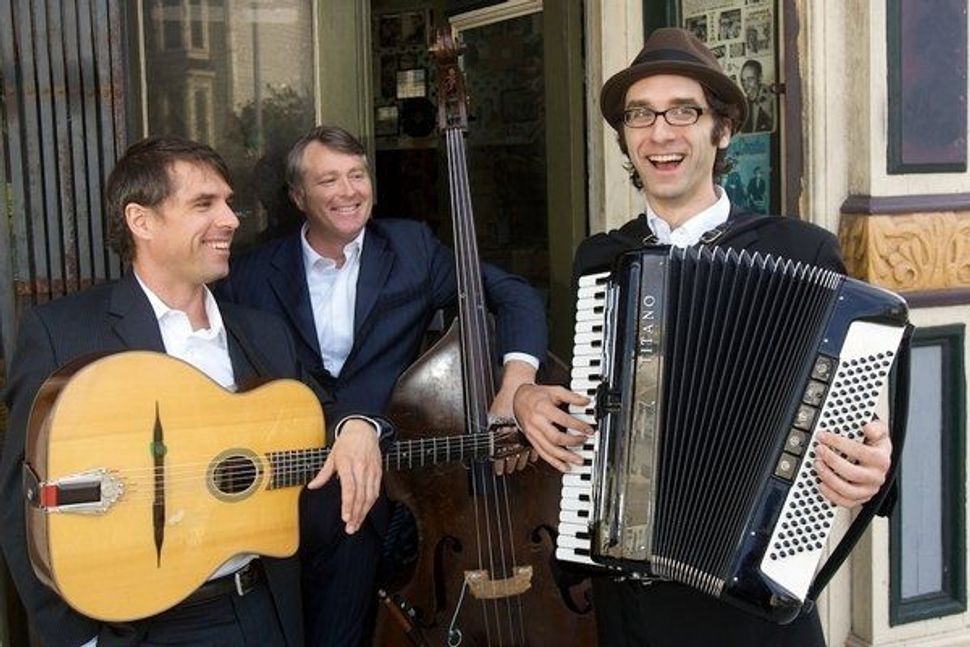 Gaucho’s “Pearl,” released last month on Porto Franco Records and launched at the Jewish Music Festival of Berkeley, Calif., is the perfect accompaniment to a lazy autumn afternoon. Channeling the sounds of 1930s Paris, the San Francisco-based sextet plays the kind of gentle, sometimes-jubilant, sometimes-melancholy swing that doesn’t make you want to get up and dance so much as lie around and reminisce about bygone nights spent carousing. Like the best Gypsy jazz, this music is coyly nostalgic; it masquerades as carefree but leaves you with a mysterious ache. 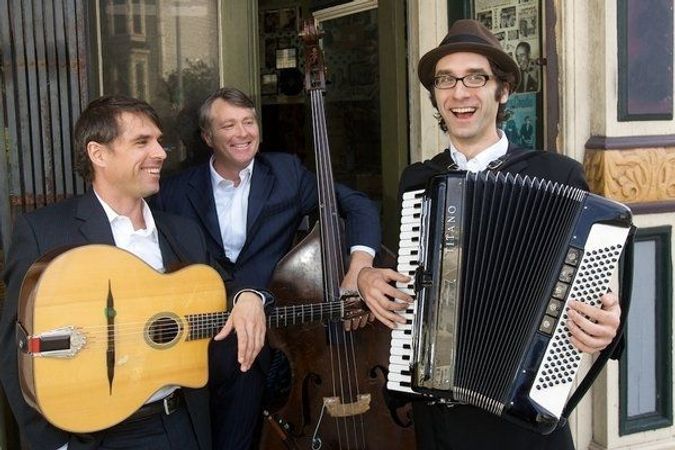 For their fourth album, Gaucho have teamed up with the New York-based jazz vocalist Tamar Korn, and this collaboration makes for some of the music’s most exciting moments. Korn’s voice is high and girlish, with an uncanny tremor that makes it sound like it’s been lifted directly off of an old record. On the album’s first track, “Sing On,” a mischievous piece written by bandleader Dave Ricketts, Korn trades solo lines with cornetist Leon Oakley. The effect is humorous because Korn is such a good mimic, belting out brassy squawks of her own. (Later, in drummer Pete Devine’s tune “Little Sweetie,” her scat syllables take the form of distinctly feline yowls.) Following saxophone and cornet solos in the group’s jaunty rendition of the jazz standard “Avalon,” Korn sings the melody freely, with big swoops and operatic flourishes, as the drums and bass (Ari Munkres) maintain a brisk, chugging groove underneath.

Listen to ‘Sing On’:

That’s not to say that the singer is the star of the show: Gypsy jazz is guitar-driven music, of course, and Dave Ricketts plays with a particularly appealing blend of classical precision and expressive swagger. He also wrote most of the music on the album, and he has a great ear for surprising, wistful harmonies that color even the most upbeat pieces. There are plenty of the usual dazzling arpeggios and runs here, but Ricketts’s subtle inflections of tone and phrasing lend unexpected pathos to even the most virtuosic passages. The other instrumentalists follow his emotive lead: Ralph Carney offers a brilliantly raunchy, New Orleans-style clarinet solo in “Doublebarrel”; Rob Reich makes the accordion sing sweetly in “Angel”; and Leon Oakley’s cornet is nimble and saucy throughout.

The album’s oddly charming title track, “Pearl,” is a meandering, seven-minute lover’s lament that — against all odds — comes across as neither maudlin nor too long. Ricketts’s hesitant, unaccompanied guitar solo sets the reflective mood, the accordion quietly enters with rich, chromatic harmony, and the drums and bass settle into a relaxed rhythm fit for a soft-shoe dance. Korn, who enters with a sighing melody after about two minutes, wrote the despairing lyrics for the piece:

Oh, you were my pearl
A treasure of the sea.
You opened my eyes to see a world inside
Of beauty unknown to me.
Oh how I lament all the time
I wasted life with pride.
A treasure lost to me,
Pearl of the sea.

This chorus looks a little overwrought on the page, but its maritime theme actually complements the music, which calls to mind a river scene with amorous couples drifting around in gondolas. Major and minor chords alternate so frequently that it’s impossible to decide whether this song is happy or sad. We’re wallowing in sorrow, yearning for the past, and yet it’s a grand old time; nostalgia is a pleasurable sensation. Who knows, in the end, whether we’re aching for our own past loves, for the Parisian cafes, or for a glimpse of Django Reinhardt himself? It hardly matters. There’s something to be said for music that makes us miss places we’ve never been and people we’ve never known.