Germany Honors Jews Who Fought in World War I 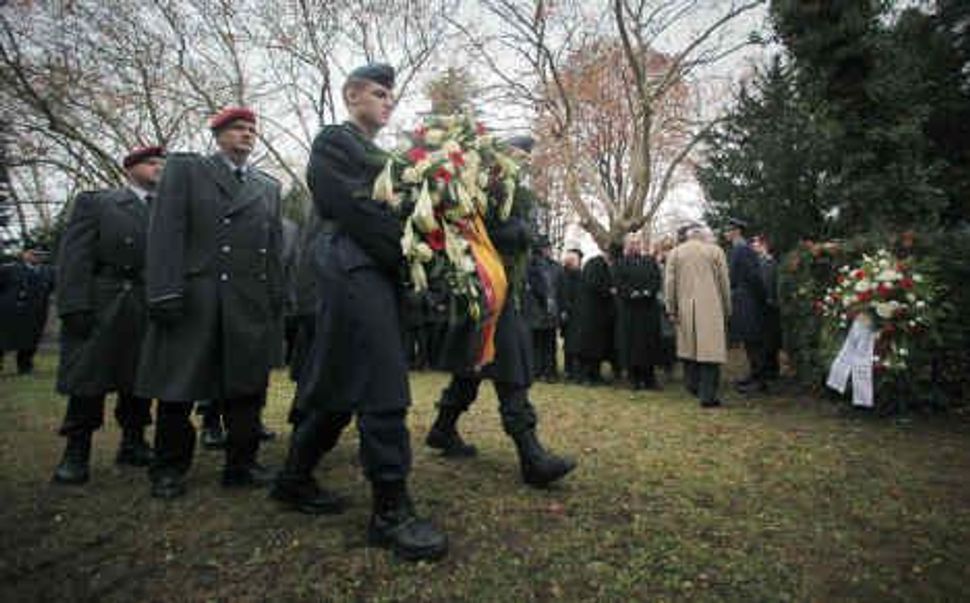 A historic ceremony at Frankfurt’s Jewish cemetery yesterday honored German Jews who gave their lives for their country in World War I. For the first time, according to news site TheLocal.de, representatives of the German government, as well as the German Bundeswehr and other national militaries, took part in the salute.

The memorial was also “the first public service at the site for as long as anyone can remember,” according to The New York Times, whose evocative report saw “German soldiers, including one wearing a skullcap with his uniform, [file] silently” through the cemetery to lay wreaths at a memorial to the fallen fighters. Battling for the kaiser during World War I claimed 467 Jewish lives from Frankfurt, and thousands from across Germany, TheLocal.de wrote.

The event was organized by Germany’s Association of Jewish Soldiers, according to the Times. Michael Berger, chairman of the group and a German Army captain, told the paper there was no exact count of the number of Jewish soldiers now in the Bundeswehr, as the force has been known since being reconstituted after World War II. But it is no more than about 200, he said.

A German Defense Ministry official told the Times that in 2008, “a few soldiers and a rabbi held a memorial at the site in Frankfurt, a semicircular stone marker erected in 1925. But there was no official event with wide participation before Sunday.” Gideon Roemer-Hillebrecht, another representative of the German Jewish soldiers’ association, told the Associated Press that because of the Holocaust “there are today barely any relatives who can honour the dead together with us.”

Throughout the First World War, Jews hoped that military service would promote their acceptance into German society, the Times wrote. Instead, after the war, Nazi “stab in the back” myths blamed Jewish treachery for Germany’s defeat. Today, though, even some Jews with links to the Holocaust have no issues serving in Germany’s army. “Ten years ago I would have given you a different answer,” Abraham Ben, son of a Holocaust survivor, told the Times. But, he said, “Jews in Germany are no longer sitting around with their bags packed. This is home.”

Germany Honors Jews Who Fought in World War I