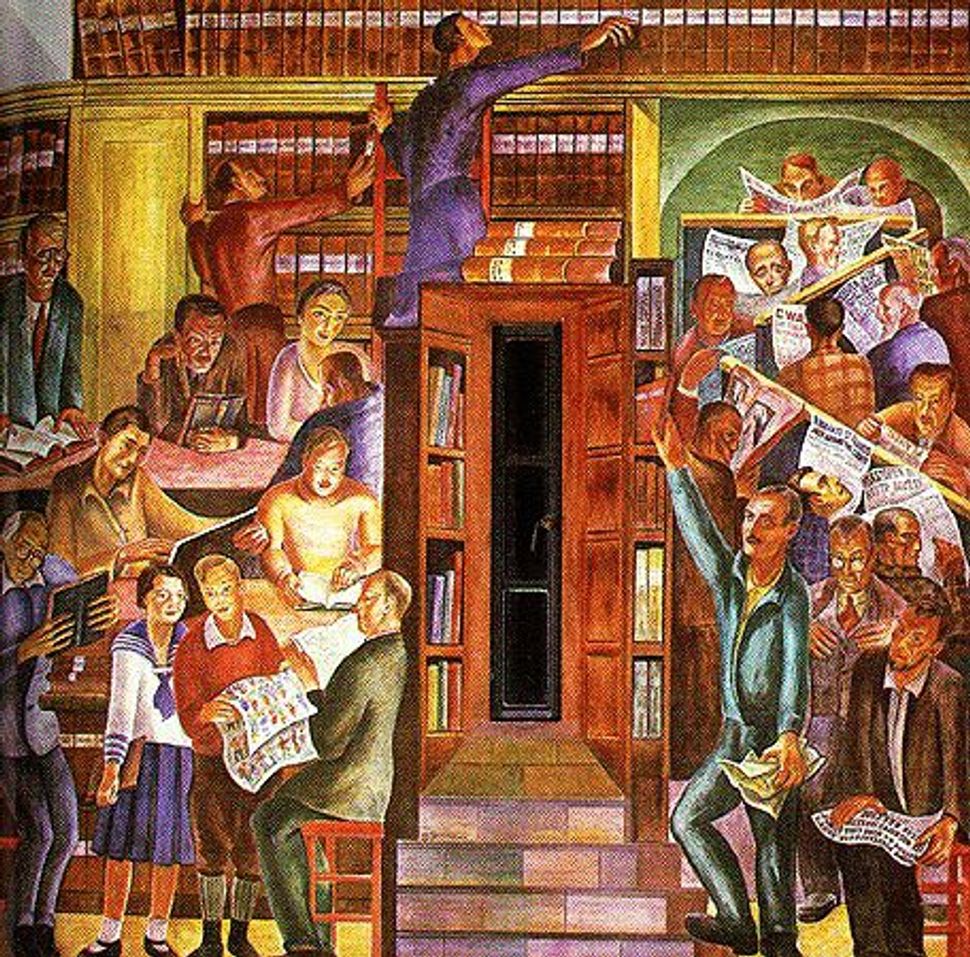 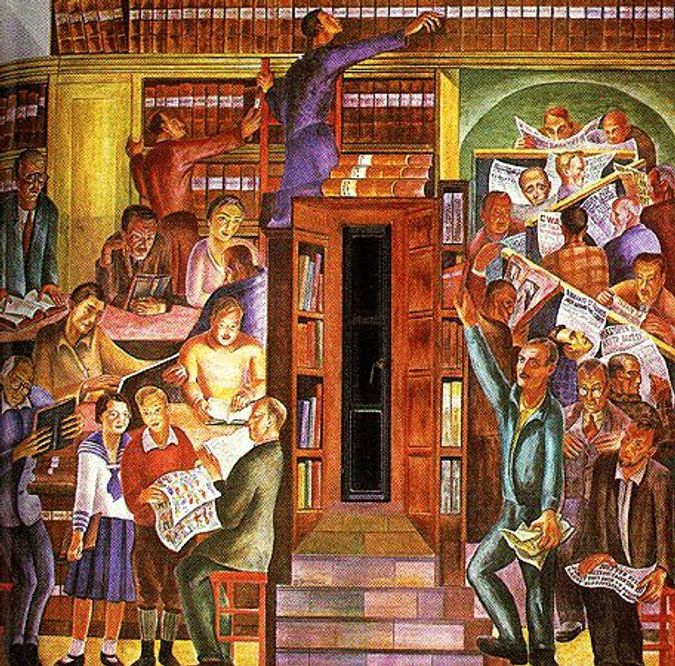 Born into a Hasidic Warsaw family, Zakheim studied art in Poland and resisted the German occupation there before immigrating to America. After arriving in San Francisco in 1921, he co-founded a leftwing Yiddish folkschule and supported his family as a furniture designer in the city’s vibrant Fillmore district (where the current exhibit is located). The painter also founded the Artists’ and Writers’ Union with bohemian poet Kenneth Rexroth, a San Francisco friend portrayed in Zakheim’s once controversial “Coit Tower” mural.

Before painting that mural and others, Zakheim went to Mexico and became a protégé of Diego Rivera, whose influence can be seen in the form and content of Zakheim’s frescos. He oversaw the entire Coit Tower mural project depicting California scenes of labor and leisure in 1934. Zakheim’s own scene portrays a public library where Marx’s “Capital” and Hebrew-lettered volumes of Torah and Prophecies sit on the shelves, along with volumes by Dos Passos, Swift, Chekhov, Fielding, Wilde and Rexroth. Library readers (some of them fellow painters) in Zakheim’s mural almost glow in burnished earthen browns, blues and ochers, as if the books they pore over have lit them from within.

Part of the federally funded Public Works of Art Project (PWAP), the Coit Tower art survived protests over its alleged Communist tendencies. (Zakheim refused to remove the Marx book when asked.) The current exhibit’s reproductions of his detailed library mural, along with other oils and watercolors, now take on new meaning as historic documents of a time when public support from PWAP and its successor the WPA (Works Progress Administration) enabled artists to respond with social conscience and creativity to injustice, unemployment, labor history, and to their own cultural heritage.

Regrettably, a number of Zakheim’s other proposals for murals were rejected, and many of his later canvases were overlooked by galleries, in part because of his leftist political background. Although he was an atheist and a Communist, Jewish history took a prominent place among Zakheim’s paintings and sculptures, particularly after he lost a large number of Warsaw relatives in World War II. His sculpted Holocaust memorial can be seen in the Mt. Sinai Memorial Park in Los Angeles. A totemic Hasid carved from dark wood stands out in the current exhibit as the only sample of his sculpture.

Zakheim painted a few other murals, notably a Jewish wedding scene still located in San Francisco’s Jewish Community Center, and a medical history panorama in a local hospital. His Rivera-influenced mural style featuring historic and heroic subjects also surfaces in a documentary film at the exhibit, and in some of the oil paintings on display, particularly one piece from 1946 that humorously depicts a modern, muscular Samson breaking through red tape as he pulls down the pillars of Wall Street. Zakheim’s earlier captivating painting of Jewish bohemians animatedly conversing in a Paris café also reveals the artist’s penchant for socially engaged and iconic subjects.

Perhaps if he were around today, Zakheim would be illustrating graphic novels or non-fiction such as Paul Buhle’s lively graphic history, “FDR and the New Deal” (illustrated by Sabrina Jones), which in one section pays tribute to federally funded artists who, like Zakheim, “worked in the arts that Americans could see before their eyes, often on a daily basis… with a mixture of firm realism, heroization… and a stylization that stressed the dignity of work.”