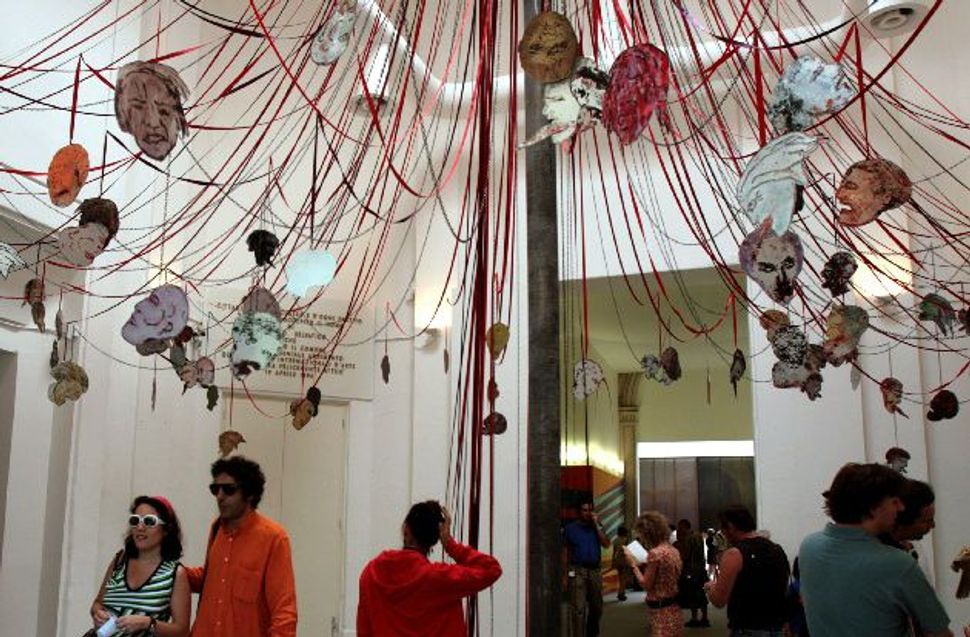 Lyon’s introduction explains the symbolic importance to Spero of texts such as “The Great Mother: An Analysis of the Archetype,” still available from Princeton University Press, by the German Jewish psychologist Erich Neumann, a longtime Tel Aviv resident. Spero’s own archetypes began in Cleveland in 1926, where she was born into a family of Russian /German Jewish descent.

A vital early teacher in Chicago, Paul Wieghardt, had fled Europe because his wife, the sculptor Nelli Bar (1904-2001), was Jewish. After meeting Golub in 1947, Spero went from strength to strength, as a 1958 canvas, “Homage to New York (I Do Not Challenge),” indicates, boldly including the initials of “rival” artists with whom she refused to compete, such as Helen Frankenthaler; Larry Rivers (born Yitzhok Loiza Grossberg); and Mark Rothko.

As the Vietnam War loomed, Spero looked back to Holocaust imagery in order to express her 60s anti-war stance, including crematoria, swastikas, and The Star of David in artworks at this time. Spero was also influenced by writings about the female body by the Algerian-born French Jewish feminist author Hélène Cixous. Into the 1990s and later, Spero’s work was preoccupied with the violence inflicted upon women, as in 1995’s “Nancy Spero: Woman/War/Victimage,” displaying a female Gestapo prisoner in an artwork created for display in Vienna.

The following year, Spero created for Vienna’s Jewish Museum “Installation of Remembrance,” featuring images of cultural achievement and everyday life. From depictions of Gustav Mahler to a synagogue to a matzoh bakery, Spero included what one curator called “fragments of memory” in this creation, which is still on view in the museum today.

In a parallel way, in 2001 when Spero created lively mosaic murals for Manhattan’s Lincoln Center subway station, she added nine images inspired by photos of the Austrian Jewish operetta diva Fritzi Massary, a widely beloved, exuberant icon. Although clearly inspired by this operetta lightness, Spero was a profoundly tragic artist, as Lyon underlines:

Together Spero and Golub sought to recreate a form of history painting for our time.

As shown in the intensely uncompromising reproductions in this new book, Spero, who died last year, succeeded triumphantly in her goal.

Watch Nancy Spero explain how she became an artist.